Many of us know what it's like to be questioned intrusively by complete strangers because of our child's disability - whether it's their behaviour or an obvious physical difference that's "wrong".

Some parents get cross, or upset. Others learn to shrug it off, pretend not to notice or even use it as an opportunity to educate if there is the time or the inclination.

It's even trickier to cope with however, when your child's condition is isn't well known, is rare or has no diagnosis at all. Mum Nadine's daughter has rare and multiple diagnoses. As Nadine, who has a blog at Charing in the Chaos, explains in our guest post today, people just like to fit you in the right "box" in their heads. 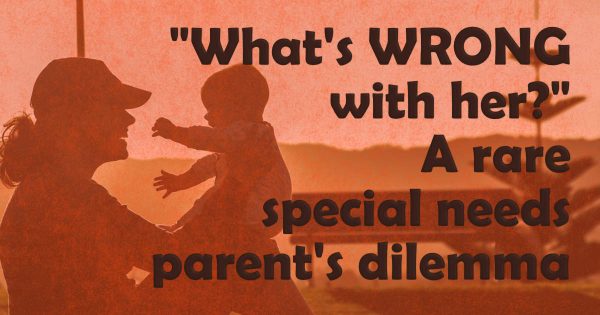 What is wrong with her?

What's wrong with her? it a question, seemingly innocent and enquiring from strangers or acquaintances, that I hear often. It may be just curiosity but to me, the question is sharp, cuts deep and touches my soul.

Wrong - the flip of the coin to 'Right'.

My eyes meeting theirs I reply, indignantly, "There is nothing wrong with ‘her’."

‘She’ has extra challenges. She is my beautiful daughter G.

But they want more, they need more to understand her differences so they can compartmentalise where she should ‘fit' in their mind.

This is where I trip up, I dither. “She errr is...developmentally delayed" (not an actual condition, rather than a description of some of her issues). Or  I say depending on the audience, “She has multiple challenges including hearing and eyesight.” Still quite vague but gives them an idea of her challenges.

Now in that millisecond, I have momentarily lost my confidence. Why? Because my daughter is "rare".

If I reply that she has Chromosome 18q, I am often met with blank stares and uncomfortable follow up questions. Which undoubtedly leads me down the road to explaining some of her challenges in more detail where I include her eyesight and hearing problems. But theses are in no way a full explanation of her condition.

An explanation of her condition is not clear cut and is complex. I often feel an insurmountable invisible pressure to 'wrap this up' as quickly as possible as the sheer vastness of information to divulge and explain is huge. My answer has the potential to laden my audience with terms and explanation they may not be able to comprehend. Or conversely they just may lose interest as they realise they have now opened up a can of worms as I verbally overwhelm them!

This can also lead to awkwardness and I sense their silent assertion that there is something wrong with her, maybe, in fact, many things.

The diagnosis was just the start of the journey

Having a child with a rare condition means nothing is clear cut and actually the diagnosis was just the beginning. The start of the unravelling.

We first got our daughter's diagnosis when she was 11 months old.  The first few months of her life were unpredictable, scary, unnerving and not at all what I had envisioned when I became a first time mum. We spent countless days in and out of hospital and at the GP. Worried sick and becoming more and more confused by the endless problems that seemed to be arising.

Upon getting her diagnosis I felt relief. I had an explanation. A label. Something I could hang my hat on and get a grip on the situation.

Having a rare condition brings a rare journey. A journey the doctors can't help you map or really prepare you for. Their job it turns out, is to help you as you react to the unfolding development of a condition.

The day we got her diagnosis I breathed a sigh of relief - I thought that was the conclusion. The end of the drama. But in fact, it was just the first of a number of diagnoses to come.

To date my daughter has been diagnosed with Nystagmus, Communicating Hydrocephalus, Reflux, Dermatitis, Glue Ear and Arthritis, as well as speech delay, hypermobility and delayed fine motor skills.- That is a lot for a just turned four year old!

My daughter has a deletion on her 18th Chromosome (The long arm), meaning a section of information is missing. As I have learned, her deletion is unique to her and her alone. Nobody in the world would have the same identical information deleted and so there is no one who could predict or confidently indicate how her condition could progress.

It was like being told officially you are in limbo. Forever. But that we should just just ‘relax’ and see how things go.  I couldn't relax I wanted to know, I wanted to plan. I wanted to fight.

Though not consciously, I had entered into the ring with Chromosome 18Q and was, in my own way, trying to ‘beat’ it. She would crawl, walk, talk, run - be ‘normal’. Within a ‘normal’ time frame and would be the exception.

The rare journey you start with your child, also creates a rare journey for yourself as an individual , as a parent and as a partner.  Nothing is as it was or how you thought it would be.  Getting my daughters diagnosis was hard to deal with - I couldn't see the Chromosome 18q, couldn't touch it , so it felt unreal. I became obsessed with meeting milestones- chasing ‘normal’.

Chromosome 18q was invisible and so I could forget it was there, sometimes. But unsuspecting instances would arise and I would be face to face with Chromosome 18q.

Like being in A&E with your unwell child and the doctors are seemingly dumbfounded as to the best way to treat your child, as she presents slightly different symptoms to the ‘norm’. That is when you feel its presence.

When the longed-for milestones of rolling, crawling, standing all elude you, no matter how hard you try to encourage her.  You feel it then.

When family and friends have younger children than yours and they are developmentally ahead of your child.  You really feel it then.

When your child is ignored by their peers as they can't understand what she is saying. Another time you feel it.

When you have changed your 4000th nappy as your child is still wearing them at four years old and toilet training is a far off dream. Oh yes, you definitely feel it then.

As time goes on, you feel the presence of Chromosome 18q more and more. It becomes more visible until one day someone says, “What is wrong with her?”

And your heart, head, mouth and soul all simultaneously react.

There is nothing “Wrong”.

My daughter is outstandingly rare, she was born with a section of information missing on her 18th Chromosome which enables her to be extra-determined, extra-resilient, extra-patient, tremendously loving and fantastically creative. She has an unparalleled spirit and incomparable abilities in the face of challenges. Her enthusiasm for laughter and fun are exceptional. She has no one in the world exactly like her; she is one of a kind.  Only 1 in 40,000 have Chromosome 18q.  My daughter is outstandingly rare and oh so right, not wrong.

Over the last four years, I have not been an expert at coping, especially when I became a single parent. But what I have learnt is that speaking to someone outside of family and friends helped me get a better grip on my emotions and understand them a bit more.  It has allowed me to be angry, feel guilty and sad, but to try and release it positively. This is why I now blog about all I have learnt and am learning about raising a child with 18Q, in the hope that my experience can inform and maybe help others.

Having a child with a rare condition is a continuing changing journey, four years in and I am in the valley of acceptance but, every so often, I can swing into sadness. I've come to realise that the diagnoses may not stop for a while and the hurdles will get farther apart, but higher each time.  I have learnt to live in the now and not look too far ahead. And I have learnt to celebrate each happy moment and be thankful when they do occur.

Nadine blogs at Caring in the Chaos

Founder of Special Needs Jungle. Parent of two young adults with autism. New grandma. Tania is a member the Ofsted SEND Inspections Stakeholders Advisory Group, and sits on the Advisory Board of the Royal Holloway, University of London Centre of Gene and Cell Therapy. She is also on the Editorial Board of Springer Nature Gene Therapy journal She is also an experienced broadcast and print journalist & author. Tania also runs a PR, web & social media consultancy, SocialOro Media. She is a rare disease & chronic pain patient advocate with Ehlers Danlos syndrome.
View all posts by Tania Tirraoro →