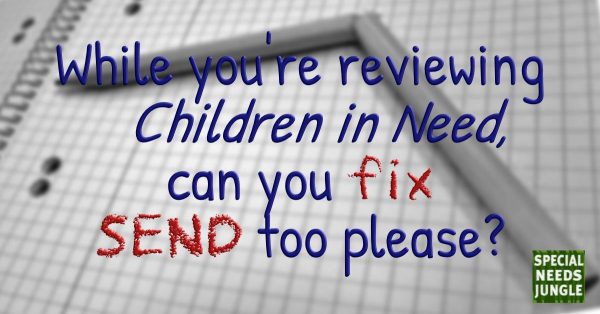 Recently, the government announced a multi-pronged review to, "transform education for children with additional needs and ambitious plans to improve the experiences of children in alternative provision". I would have written about this sooner but my "part-time" EFL TESOL teaching course, on top of Ehlers Danlos syndrome = total exhaustion.*

I have to say, I have a new respect for teachers since I started the course. It's not just the organisation of resources and teaching matter, or helping the students, it's the emotional expense of being enthusiastic (and just for 50 minutes for me in teaching practice) Teachers, I don't know how you do it every day. And if you add the pressure of red tape and unhappy parents, I think I would be a basket case by the end of day one if I was in a school. So hats off to those of you who put your heart into your work. I am not at all sure I will be able to even finish the course, let alone ever do it for real.

And speaking of teachers, further down this post, you will see that although this review is good news, there are other things that the DfE should URGENTLY be doing RIGHT NOW to stop teachers and therefore schools, collapsing from the stress caused by of funding cuts.

The Children in Need review

So, the Children in Need review was announced by Education Secretary Damian Hinds. Mr Hinds is, I have heard, taking a great interest in SEND. He even spoke at the recent APPG on Autism's launch of their report in parliament that I attended earlier this year. Not the SEND minister, Mr Zahawi, the actual secretary of state. He must have listened because he's taken this action even though he's barely got his feet under the desk.

Evidence shows children educated in alternative provision, school settings for children who face challenges in mainstream school, are less likely to achieve good GCSE grades and are less likely to be in education, employment or training post-16. Previous analysis also shows that children excluded from school are more likely to end up in the criminal justice system... DfE launching the review

The plans aim to tackle inequalities by looking at the experience and outcomes for children who face the most challenges in mainstream school - including those at greatest risk of exclusion - such as those with special educational needs (SEN), children with autism or children in need of help and protection, including those in care.

Speaking of SEND ministers and exclusion, part of this program has given a new role to former minister, Ed Timpson, who lost his parliamentary seat at the last election, and thus his his DfE job. He is to lead the launch of an externally led review of exclusions, that will look at how the use and levels of exclusions vary from school to school, focusing on those children who are more likely to be excluded. This, as many parents will know, is sorely needed as schools use "off-rolling" to get rid of children who skew their statistics and cost them money, despite it being illegal.

Exclusion rates are going through the roof with, for example, Slough, in Berkshire, having a 340% rise - and that's not a typo. Others are still telling parents to take their children home at lunchtime - I had an email from one distraught parent about this just today. If this has happened to you, IPSEA has resources to help.

And where do children who are excluded or off-rolled end up? In "alternative provision", which means de-facto home education whether the parent wants to or not, supported by LA-provided tutors for inadequate amounts of time, or in Pupil Referral Units.

Last month, the Office of the Schools Adjudicator raised concerns about schools encouraging families to educate their children at home as an 'alternative' to being excluded. The report referenced "disturbing" instances of references to children being removed from schools to be educated at home with the encouragement of the school as an alternative to exclusion.”

These new plans include developing a ‘roadmap’ setting out how the government will transform alternative provision, ensuring these education settings provide high-quality teaching and an education that meets the individual needs of young people in their care.

This will be backed up by £4 million Alternative Provision Innovation Fund to test and develop projects that support children back into mainstream or special schools, as well as encouraging parental and carer involvement in the education of their child. The DfE says the investment will also fund schemes that support young people as they move from alternative provision in to training or further education at post-16, "so all young people can succeed in the next stage of their lives".

The DfE has also published analysis that shows how far "children in need" fall behind their peers from the early years, making less progress throughout school. Children in need are three times more likely to have special educational needs than other children, which means that they are well on the road to poorer educational outcomes. The DfE says these plans will, "sharpen the focus on the core essentials of education and improve educational outcomes for these children, widening the options available to them so that they can succeed later in life."

How you can get involved

There is a call for evidence on how to improve educational outcomes for 'children in need'. What's a child in need I hear you ask? It's defined as "children who need additional help or protection, including children in care." So this includes children with SEND. The call for evidence will, "gather best practice from school leaders, social workers and other professionals, fulfilling a manifesto commitment to find out what works in improving the educational outcomes for these children."

Evidently, this review is only for professionals, as when you click through (at time of writing), there is no option in the drop down box to select "parent'. Clearly, your views, if you are a parent, are surplus to requirements. There is an "other" selection though, so there is nothing to stop you putting your opinion forward if you have seen best practice - and many parents have - and you would like to share it. I think this is a bit of a glaring omission by the DfE,  to be honest - but still time to fix it, isn't there? It's here if you want to feedback.

What about fixing SEND while you're at it?

"We are at a point where we have no glue sticks or pencils. We are not allowed any more. These are real desperate times" SEN teacher
Of course we all know that one of the reasons for all this stuff that's going wrong (aside from the lack of will in some LAs to do the right thing) is money. All the evidence about what works and what doesn't work is totally irrelevant if there's no money to put it right. Schools are stretched and making support staff redundant and I wouldn't be at all surprised if a school's delegated SEND budget is spent more (out of neccesity) on school essentials, than actually helping children with SEND. So schools can't support these pupils and they end up getting excluded because they're not supported.

LAs are stretched to breaking point. SEND money from the DfE isn't ring-fenced so there is nothing to stop council leaders from "re-directing" it elsewhere, leaving staff to be cut and fewer funds to implement the reforms (if they had any intention of doing so). It is an utter disgrace that parents are having to crowdfund to hire lawyers to take LAs to Judicial Review about their SEND budget cuts. Other parents are planning on taking other kinds of direct action such as organising marches to try to get SEND properly funded. In desperate times, desperate measures are needed and the parents at SNJ are with you 100%. For parents up and down the country, the gloves are off. You have been warned.

A teacher's cry for help

Here is an email I received this weekend from a teacher in an SEN school in Medway, Kent, that has failed its Ofsted SEND inspection and has been told to urgently improve.

I teach in an SEN school, we have not been allowed to buy anything for the past three months. We are at a point where we have no glue sticks or pencils. We are not allowed any more. These are real desperate times and I’m not sure people are aware of the situation. On top of this, we are run by a failing authority, Medway. Their Ofsted report could not be worse and again, no one knows.

Us teachers head into the last week of term, completely exhausted from juggling everything that is being thrown at us including parents frustrations. The good teachers simply won’t last much longer and to top it off, they will be in so much debt from buying supplies for their classrooms.

I mean, seriously? ffs! This is NOT what should be happening in schools - and especially not SEN schools. The image below is how Medway told residents about its dreadful SEND inspection. Transparency? What's that? Read a news story about the inspection here and the actual report here

So, while the DfE looking at the reasons why SEND is in a sinkhole that's growing into a vast chasm of unsupported disabled children and desperate parents, I have a couple of points Mr Hinds might like urgently to consider:

*Are you a sh*t-hot journo who's in the market for a bit of feel-good volunteering? Whether you're at home with the kids or just want to add something positive to your CV, we need someone who can keep on top of SEND news and quickly turn around stories for the site without much supervision. Basic WordPress skills required too or be ready to learn fast. Great also for post-grad students who can write without waffle. Email me.