A story in the Independent newspaper has make me lurch up from my sickbed to highlight something I have known about for some time, but just not the scale of it.

You may be thinking that just because you only share innocent photos of your kids doing regular stuff like homework, playing with the dog, on their bike, and you have your Facebook settings to 'friends' that you are safe.

The UK Indy covered Lucy Battersby's story in The Sydney Morning Herald story of Australia's new Children's eSafety Commissioner warning that half of the material found on certain paedophilia websites has been sourced or stolen from parents innocently posting images of their families online.

Alastair MacGibbon said that a team of investigators looking into complaints of child abuse material had discovered tens of millions of photos of children doing everyday activities such as swimming, sports or homework.

He told the Sydney Morning Herald that while the images themselves were not exploitative, comments attached to them by strangers sexualised them – and said that parents who had no idea how easily they could be downloaded by strangers were thoughtlessly cataloguing every aspect of their children's lives, "with no security against these obsessive efforts to obtain content".

The article quoted cyber-safety expert Susan McLean, who said that Facebook contained the best safety and security settings for restricted content, told the newspaper that "over-sharing parents" were of particular concern.  "You have to got to understand that that photo is worth something to someone else and it may not be for a purpose you like," she said.

Mr MacGibbon pointed out that within 10 days of being uploaded, some of the content from popular social media sharing sites such as Facebook, Instagram and Kik had been viewed 1.7 million times. Images were often catalogued in 'themes' such as "kids at beach", "nice boys play in river" or "gymnasts", alongside comments that explicitly sexualised the material.

"Many parents do not lock their accounts down in the same way kids do. It does not matter how innocent the photo is, if your child has got what a predator is looking for, they will take that photo."
"Many users clearly identify that they have obtained the content through trawling social media accounts," he told the newspaper. "The images are almost always accompanied by highly explicit and very disturbing user comments. Often, users exchange email addresses with invitations to connect outside the site to trade content.

Susan McLean said, "When you post anything online, does not matter where it is, you have lost control of it," she said. "Many parents do not lock their accounts down in the same way kids do. It does not matter how innocent the photo is, if your child has got what a predator is looking for, they will take that photo." 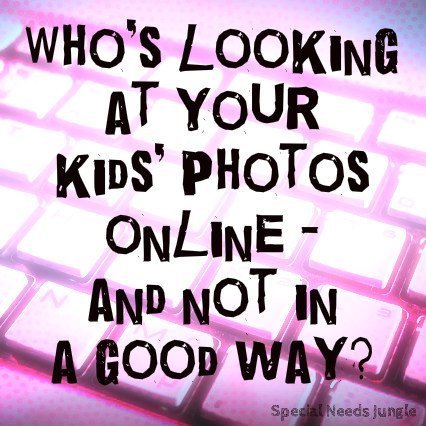 And if that doesn't want to make you weep or scream, it's not even the tip of the iceberg. Because it isn't just images - it's that cute video of your kids on holiday and also content featuring people with certain disabilities such as amputations or hormonal or developmental conditions - children, adolescents and adults alike.

It also can include those having intimate medical procedures that have been videoed as teaching material for doctors and even opportunistic secret filming of children and young women (in fact all ages) on the street. Just search YouTube and you will find it all. Sometimes YouTube takes it down, sometimes they are far too naïve or careless for their own good, it seems.

You've seen some young person or other, publishing a self-empowering awareness video that they feel will help them "take ownership" of their condition to show they are proud of who they are. And of course, this is wonderful for them. But a huge proportion of the hits may be from people watching & illegally downloading it with a completely different agenda.

On YouTube you can find compilations of videos, where although a single image or video in itself may be innocuous, the playlist it's featured on and the channel name are often a giveaway of a fetishistic or paedophilic intent. It's stomach-turning.

But just the sheer, horrific scale of it is almost impossible to get to grips with - it is a stark reminder that the world is really, really not what we would like to think it is. There are hints of the reality all around us, but if we joined the dots, we might all actually have to do something about it. It's much easier to think that someone else will tackle it, or that it's just a photo or a video, not the actual person being harmed. Would we think that if it was a picture of us or our child?

The report quotes Toby Dagg, senior investigator at the eSafety Commissioner, who reported that on one paedophile site which contained at least 45 million images of children, about half the material appeared to be "sourced directly from social media". It was then labelled in folders entitled "Kik girls" or "my daughter's Instagram friends".

So what can you do?

We have become far too comfortable with what we share online- myself included. We rationalise that it's just your Facebook friends. But how well do we know them all? And if it's Instagram, you may set your account to private, but do you know all the people you do grant access to? Do you know them so well you are definitely sure they would never download and pass on your child's photo? I bet you don't, not all of them.

But should we really live in fear that sharing Johnny's first bike ride will end up on the computer screen of a million perverts? Should we just carry on as normal, perhaps being a little bit more careful as a result of this post, because those people are far away (are you sure about that?). And should we stop something we enjoy like Facebook sharing because someone we don't know may enjoy it in a completely different way? And who is it really hurting anyway, you may ask?

I believe that spiritually, it damages all of us.

Much of our austerity-ridden society is being diverted by the exploitative semi-clad 'sleb rubbish from the Mail and its ilk, the wall to wall crap reality tv often selectively showcasing the dregs of humanity, by news-gathering based on cost and the British body count and mass media generally appealing to the lowest common denominator. I understand that it's an escape from a shit day (and God only knows special needs parents have plenty of those!) but where does it end? Am I getting off the point? No, I don't think so - it is all connected, what we are seduced into thinking of as normal and what we allow into our and our children's lives.

I think I know SNJ's readership enough to know that the vast majority feel the same way - uneasy, anxious and often quite overwhelmed.

I don't have a complete answer because, as we are discovering, the sheer sickening scale of these paedophile and exploitative networks are mind-boggling and they are hydra-like. It's so horrific that the temptation is to put our heads in the sand and pretend it isn't real because who on earth could get off on a kid's bike ride photo anyway? As a friend recently said to me, if it exists, someone will get a thrill out of it.

I recall someone I once knew uploading to Facebook, a video of a small girl dancing in a public square (no relation) as a "cute thing". I thought it was a bit odd, but perhaps it was just my own cynical journalist mind and said nothing. But where could that have ended up? Who else might have seen it, liked it for 'less innocent' reasons and downloaded it?

This website and thousands of others features illustrative and completely innocent photos of children. Should we take them all down? We will have to think about that, but it's probably way too late. And in any case, what would that achieve when the web and the dark net is crawling with a billion others?

You can't fight it, but you can, and should, have your own personal sharing policy. Only you can judge for yourself what you are comfortable with sharing and, knowing the risks of having your photos expropriated for nefarious purposes, what you are willing to put online.

My main advice is:

It's tough: we are social beings and Facebook, Instagram etc have given us the ability to remain connected with friends we would otherwise have lost touch with and we want to share our lives. But just be warned, once it's uploaded it really is gone from your control forever unless you mark it private and it stays that way.

And teach your children well. Because once they get their own phones, it's a whole new ball game and another post.

What are your views on this? Tell us in the comments.