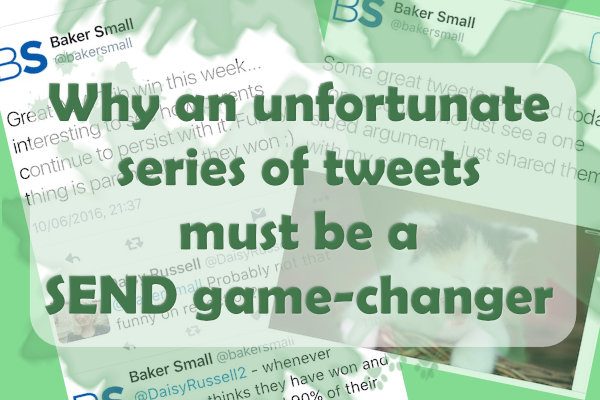 If you were browsing Twitter at the weekend, you may have happened upon a series of most startling and revealing tweets. If you were a bit late, you would most probably have seen the screenshots outraged parents took of them instead. 'Someone' at legal firm, Baker Small, who represent a number of local authorities at the SEND Tribunal to defend appeals by parents, decided to embark on what could potentially be a bout of career suicide.

He erroneously thought other tweeters would also find ridiculing parents fighting for their disabled child's SEND provision, somehow amusing. The BS tweeter (and we do know who it was, by the way) was quickly challenged. But did they stop? Noooooooo... 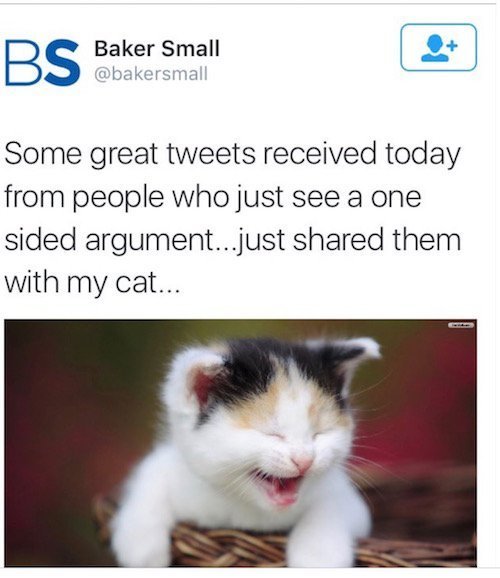 We normally all love tweets with baby animals, but not this one. This was more like a slow-motion car crash [For more tweets, I have included links at the end of this post*]. The BS tweeter, for he shall remain nameless, proceeded to block a number of angry parents, which is a bit like closing your eyes and putting your fingers in your ears.

Not long after, Twitter user @dianeMkay shared a letter of complaint she had written.

Some hours later, the gravity of the issue was realised at Baker Small, the tweets were deleted and, eventually, after a severe Twitter-beating, an apology was issued.

I have personal experience of this firm at a SEND Tribunal I attended, when a lawyer at said firm, in his closing statement, said the child in question was, 'lucky to be doing as well as he was at school, considering he had Autism'. This statement is, clearly, given these latest tweets, quite indicative of the ethos of that firm. (My parent won, btw)

This whole, unsavoury debacle brings up several issues: first, it is clear that local authorities are in bed with legal firms who have a win-at-all-costs attitude and who do not take into account  - or do not care - that a vulnerable child is at the heart of the case. Some are keen to make their name establishing new case law or setting precedents that prevent children getting the help their parents believe they need. And let's not forget, the SEND Code of Practice says 'parents know their children best'.

Second, I think this opens a much wider question. Should lawyers be allowed at SEND Tribunals? While it is clear that parents going to Tribunal should be able to have help, if needed, in organising their case and an advocate to support them in such a stressful and unfamiliar setting, should councils be permitted to spend taxpayers money hiring expensive solicitors and barristers to undermine a system that has been changed to stop adversarial practice?

If a Local Authority (LA) wants to deny the support that is being sought, then it should be able to show in the existing law that it is within the legal framework to do so. If they want the law to be clarified, then they should have the guts to represent themselves and explain why. This should not require an external firm, it simply encourages LAs to farm tricky cases out as part of an already-paid-for-with-taxpayers-money contract to a legal firm who don't mind getting their hands dirty.

It also allows the law firm to be used as a way to prune the number of children the LA will have to issue EHC plans to. When you are paying a legal firm a hefty annual fee for their services, why not drag parents to Tribunal at every opportunity? The thought of Tribunal is more than many parents can bear, and the cost of employing their own solicitor is prohibitively expensive, so they feel forced to give up fighting for the provisions the child needs and the LA doesn't have to pay out anything to meet them.

This current way of doing business means that a non-adversarial system will never, ever, happen because lawyers (on both sides) earn their money by winning cases. And if the LA lawyers win, children lose.

I'm not saying that LAs should just roll over and give parents every thing they are asking for. It should be a calm, reasonable negotiation. A 'no' at an EHCP decision panel by a SEND department, should never be just a no. It should be the door to another meeting where parents are asked to clarify their claim, examine whether all the information has been considered (because this happens far too often) and an agreement can be reached on the support the child needs, whether at SEN Support or perhaps to move ahead with an EHCP or assessment.

Even getting as far as Tribunal is perhaps a sign that the local authority has failed to carry out the new law in a satisfactory manner. Parents DO NOT apply for a statutory assessment or for an EHCP lightly. It's a hell of a lot of work and stress when they are already dealing with a child who is suffering.

If a decision cannot be made there or at mediation, then the (highly experienced) Tribunal judge is perfectly capable of looking at the facts, and hearing from the council's SEND Tribunal Officer and the parent and their advocate (if needed) and asking their own questions before coming to a decision. Increasingly, cases are managed at Case Management telephone hearings and this could be further supported.

How much do local authorities spend on Tribunal lawyers?

Matt Keer, parent of a deaf child, has just spent a couple of hours looking at which local authorities use the services of Baker Small.  He has kindly provided me with his findings, from publicly available sources online. Over to Matt:

A fair amount of BS business seems to come on a case-by-case basis. I’ve dug through various council’s transparency data returns for expenditure over £500 in the last financial year. This is retrospective data – I can’t tell from it whether these local authorities still use BS or not. But it’s recent. Again, nowhere near comprehensive, but I found the following:

That’s £1.25 million in live SEN contracting action for Baker Small over the last year. And that’s without going north of The Wash - this was data found in just a couple of hours."

If Matt - or anyone else - provides me with more information about how much their LA spends on fighting their children's right to a suitable education, I will include it.

What should happen instead?

Perhaps LAs should use some of the money they spend on lawyers to instead develop thorough, high quality training for their SEN staff so that applications are managed in a timely, legal and expert way. The aim at every stage should be to reach mutual agreement and to avoid escalation and dispute. They could also use some of the money to boost their local Independent Supporter programme so that, should a case need to be decided at a Tribunal because it is nuanced or complex, the IS can accompany the parent all the way through, instead of only as far as the final decision (before any appeal)

The current structure and the way the IS program is being funded only on a year-to-year basis does not provide stability or confidence. It does not encourage LAs to work closely with families (Note: SNJ has its own working with parents presentation for LAs, schools, colleges and NHS if you are interested.)

And finally, back to the tweets that lit the touch paper. If I was an LA decision-maker, I would be very careful whom I hired to represent me, if I hired anyone at all. There is, in my honest opinion, clearly an anti-parent bias shown in these tweets, deleted and apologised for or not, that would make me think twice before I let such a firm represent my interests at Tribunal. Is that really the kind of message they want to send to parents?

And can any parent at a Tribunal hearing where Baker Small are representing their LA now be confident that any agreement they reach is not rooted in this anti-parent approach?

I would like to call on parents to make your feelings about this issue known. If your local authority uses this firm - write to the Council Leader and the Director of Children's services and the Head of SEN and demand that they not spend taxpayers - i.e, your - money on a firm whose approach is clearly so against the new way of working that it sends completely the wrong message to everyone, including Ofsted and the Department of Education.

If your LA uses any firm of SEND lawyers, you should ask them why they do this, when they should spend such scarce resources more positively. Diane Kay is starting a petition along the same lines, I'll add a link when it's available.

We can not change this system by sitting back and hoping for the best. It's time to act.

*There were other tweets from the beleagured BS lawyer, you can find them on Steph's and Debs' blogs