Just a quick post after Matt's epic blog yesterday on SEND Inspectors (we have been asked for a right of reply by Ofsted and are happy to do so, so watch this space).

The next tax year's SEND funding was announced yesterday, amounting to an increase of £4.2 million on last year to implement the reforms in England. It's the final year of funding support for implementation from the Department for Education and I do wonder if the amount of support that would be needed had been anticipated when the bill was being debated. If it had, they might have sought to make the SEND Code of Practice a lot tighter in prescription so local authorities had far less wriggle room. As it is, they've taken the gaps left for innovation and turned them into black holes of unlawful local policy, something foreseen by everyone except the DfE. 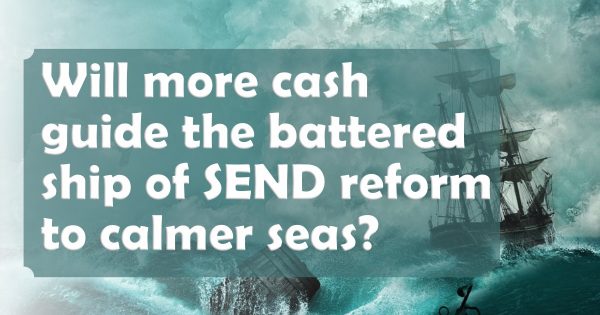 Scores on the doors

Also read: SEND charities and funding: Is there more trouble ahead?

The Education Minister, Ed Timpson, at the helm in these stormy seas of SEND, said:

As we enter the final year of the transition, I know there are still challenges to overcome, to ensure that the inspiring work going on in many parts of the country is shared with areas where improvements still need to be made.

That’s why I’m delighted to be able to confirm this additional funding for councils and for the groups playing such a vital role in supporting children with SEND. All children, no matter the obstacles they face, should have the same opportunities for success as any other.

Challenges.. I'll say. You only have to check back through the posts here to see that. However, it can't go on like this and we must, surely, sail into calmer waters soon. I still seem to be surrounded on all sides by angry parents and hapless local authorities in the same way - if not more so- than at the start of the changes.

A plea from the heart

I'll say it again - it's not even about money. This SEND ship won't safely dock until those managers in SEND, health and social care departments, who haven't yet drunk the reform Kool Aid, realise that they need to put children and families -  NOT structures, policies and "the way we do things" - front and centre.

Heads up: Your way ain't working for anyone but you and you are not who the system is there to serve. You do the serving, okay? Public servant, the clue is in the job title. That's what you get paid for. It's not the council's money, it's the people's money, paid in taxes to protect the vulnerable (that's disabled kids and young people). Some of you are even sitting on surpluses. Make sure this money that's being handed over, unringfenced, goes where it should.

And to coin the 'Friends and Family' adage, make sure that the service you deliver is good enough for your child, or your grandchild, should they need it.