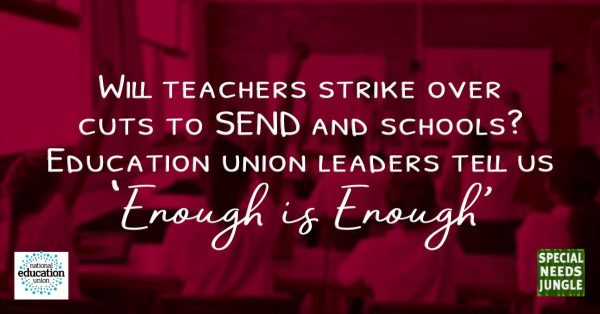 Earlier this week an estimated one-thousand parents, teachers and teaching unions took part in a march and rally, through the cold November evening, to the Department for Education in London. They braved the chilly night to demand better funding for schools and SEND. Although I couldn't be there, SNJ fully supported the march.

Labour leader, Jeremy Corbin and shadow Education Secretary, Angela Rayner, spoke at the rally in support of the campaign, although I do feel it would have been nice to hear more from them more publically, months ago.

Also this week was the third hearing in the SEND Inquiry. As I've been away at a family funeral, I have been unable to do a précis, but you can find one here on Schools Week and here on TES.

On the subject of funding, SEND Minister, Nadhim Zahawi, said in parliament this week he was, "..listening to the concerns that some have expressed about the pressures on high needs budgets. We are monitoring the impact of our national funding formula for high needs on local authority spending decisions, and are keeping the overall amount of funding for high needs under review."
However we, and many other others say that he should surely, by now, have heard enough. How long is he, and the government, prepared to let this crisis for disabled children continue?

Teachers are now taking part in an indicative ballot for strike action to bring their point home. Would you support or join a teachers' strike for funding?

Today on Special Needs Jungle, Joint General Secretaries of the National Teachers' Union (NEU), Mary Bousted and Kevin Courtney, who organised Tuesday's march, write for SNJ about their action, why "little extras" is more than an insult to parents, and teachers and why Enough is Enough.

Enough is Enough - now it's beyond time to act

The fight goes on as it seems the Government, the Education Secretary, Damian Hinds and the Chancellor, Phillip Hammond, haven’t heard the voices of children, parents and school staff telling them about the crisis in SEND funding.

This week we marched to the DfE again to tell Mr Hammond to:

This event was supported by Special Needs Jungle and SEND National Crisis representatives spoke at the rally.

SEND not a Government priority

Schools need more than the ‘little extras’ Phillip Hammond got so excited about in his budget statement.

It was clear from the omission of SEND completely from the budget that this is not a government priority. This is why all of us need to keep working together to tell our MPs, the media and everyone who hasn’t yet heard about the crisis in SEND funding in our schools and communities.

Everyone connected to a school can tell stories of cuts to TA jobs, sharing SENCOs, bigger class sizes and inadequate funding for basic resources etc. The 34,000 people who signed the SEND cuts petition which was handed in to the DfE on 24th October have their own stories to tell but the Government aren’t listening.

As all teachers are teachers of SEND this must be reflected in their pay and the importance of an inclusive education system needs to be recognised in addressing the current recruitment and retention crisis in the profession. Teachers do an amazing job and should be fairly rewarded for this.

In a system which is chronically underfunded they continue to strive for inclusive education. The government must fully fund the teacher’s pay increase. Schools can’t afford it and children can’t afford not to have qualified teachers alongside well-qualified support staff leading learning.

In a letter to the Chair of the Public Accounts Committee on 30 October 2018 Amanda Spielman, Her Majesty’s Chief Inspector said: “In recent years, as funding growth has slowed, school leaders have had to work harder to balance their budgets and we see this necessitating some difficult choices. Currently, however, my inspectors are not seeing an impact on education standards.”

The NEU, NAHT and ASCL education unions disagree with this view and believe that funding pressures have resulted in cuts to curriculum options, enrichment activities, individual student support, classroom resources and maintenance budgets. The Government’s failure to fully fund and fully implement the teacher review body’s pay recommendation is also threatening the quality of education.

Cuts in school budgets are damaging the teaching profession and in a recent survey, SENCOs told us that their workload is becoming unmanageable. That is why it is important for SENCOs alongside their colleagues to say yes to taking further action in support of the joint union campaign against government cuts to school funding.

Ahead of the Budget, NEU, NAHT and ASCL set out six tests of what schools and colleges needed to see, none of which were met by the recent budget announcement.

Enough is now Enough - the NEU, NAHT and ASCL are concerned that the funding crisis is putting educational standards at risk and are determined to act on behalf of children and young people to persuade the Government that more investment in schools is needed urgently. This is why this week we are asking our members what they would like to do next. It is time to act!