It's a while since we brought you a giveaway, so today here's your chance to win a copy of a new book about a parent's experience of autism.

Fiona Reeves has been an SNJ reader for a few years. She is the mother of two children, an 11 year old girl and an 8 year old boy. Her son, Thomas, was diagnosed with autism aged 6.

Fiona wanted to find a way to tell her son about his diagnosis, but struggled to know how to go about it. So she decided to do it in a story, which has become a book. She's here today to tell us about it and offer a copy to send to a lucky reader - if you'd like to be in with a chance, fill in the form at the end of the post. 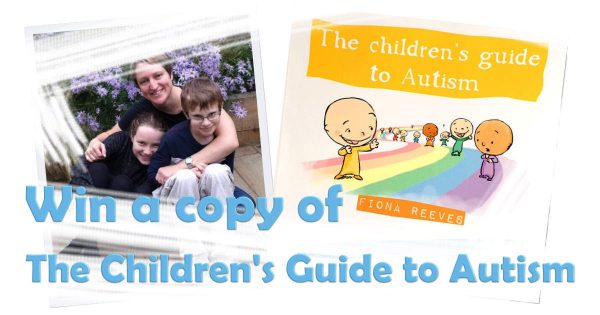 When my son was diagnosed with autism aged six, I wanted to tell him about his autism, because I think it's important that people know about their own diagnosis (it helps them to understand themselves - always a good thing, and they will notice differences in themselves anyway that they need to understand the reason for - not guess at a wrong reason), but I struggled to know how to go about it.

I didn't think a direct conversation would work very well, it can be difficult to get his attention sometimes and he also has a verbal processing delay, something which was very obvious at that age (he is now 8, and his sister is 11). He's always been better at reading things, he takes it in straight away. Bedtime reading quickly became him reading to himself rather than us reading to him! He loves reading, and finding out things - science, how things work etc (but also funny books like the pig diary books by Emer Stamp, the Danger Is Everywhere series by David O'Doherty and the Storey Treehouse series by Andy Griffiths being some of his favourites). He's very good at reading, and very fast too!

I remember at school, when he was in Year 1 and being assessed for autism, they had an art day. At one point the children were sat around tables covered in newspaper and a teacher was telling them and demonstrating what they needed to do to make an item. My son appeared to be paying no attention at all, he was busy reading the newspaper article in front of him on the table, which was there to protect the table from glue! He just can't help but read things. I worry that when he gets to high school age he'll spend all his time standing in corridors distracted by displays, reading them, and missing all his lessons!

So, naturally, I thought a book would be the best way to start telling him about his autism.

I initially tried buying a short picture book about the friendship of two boys, one of whom was autistic. It had good reviews but I was extremely disappointed with it because the autistic child was incredibly tailored to very specific autism presentation, none of which seemed to apply to my son! It just wasn't relevant, so I didn't use it, and didn't know what to do next. What I really needed was a "See Inside Autism" book, but it doesn't exist (my son loves those non-fiction books, and owns most of them).

So, eventually, I decided to write something myself for him. This idea gradually grew! At first I wrote and sketched by hand and thought I'd put together a handmade thing for him. Then I realised I could self-publish on Kindle and I paid an animator friend (Billy Allison) to draw some professional versions of my rubbish pencil sketches. It would then be something more appealing for my son which might engage and maintain his focus; he would also know that his mum went to the effort of making a book for him and I could include a dedication. The book could then also be read by his friends, and if it was of any benefit to anybody else in the world it would be out there for them too. I just got it finished in time to publish on Amazon Kindle during World Autism Awareness Week (WAAW) in 2015. A print on demand paperback version followed (after a positive Amazon review requested a paperback version, and me finding out how to provide one).

I've always been very open about my son's diagnosis, talking to parents of his friends, and parents of children at school. I've always had a very positive reaction and I know some parents talked to their children about it and used my book when I launched it free during WAAW; it benefitted everyone. It definitely benefitted my son to have people around him that had some level of awareness and understanding. Children seemed to be more friendly and supportive to my son afterwards, definitely not less, and parents were interested in finding out more. Although I appreciate that my positive experience of course doesn't guarantee that everyone will find the same.

I do believe peer awareness is important. Having attended an anti-bullying workshop for parents of children on the autism spectrum it (peer awareness) is highly recommended for helping the prevention of bullying (not only for the understanding of people who may otherwise be the bully, but also for your child having a protective barrier of people around them that understand and help to prevent others from bullying). I have also discovered the fantastic Gareth Morewood since then, a secondary school SENCo who is a prominent advocate of peer awareness in the classroom:

Knowing about my son's autism has also meant that parents sometimes ask me questions about it, giving me the opportunity to further spread understanding. They also tell me if they've heard something on the radio about autism, or seen something on TV or read an article - incase I'm interested; or thoughtfully ask if he'll be alright (sometimes their own child has prompted them, which is particularly wonderful) at their child's upcoming birthday party etc. (e.g. should they tell the professional leading the party, is there anything they should specifically cater for etc.).

So, if you are struggling with how to explain your young child's diagnosis to them, or would like a young child to understand something about autism, feel free to give my book a try! Everyone is different, but it seeks to get that message across and that difference isn't bad (it's an encouraging and positive book!). It's a conversation starter where you can then talk about how autism affects your specific child. My son, and some of his friends, read it at age 6/7, when in Year 3 of primary school. The Children's Guide To Autism by Fiona Reeves on Amazon

I recently finished my second book, The Children's Guide to Things People Say (but don't really mean), which is a children's reference book about UK idioms / metaphors / phrases / sayings e.g. "set the cat among the pigeons". It is full of child-friendly example scenarios, and a few opportunities to colour in pictures. There are two paperback versions, full colour interior (more expensive) , and monochrome interior (half the price and more opportunities to colour in)