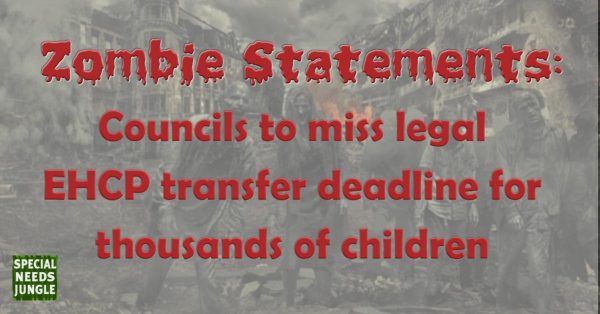 After a turbulent 2017, we’re all hoping for better things for the world of SEND this year. But however things pan out, 2018 should be a milestone year for one important reason – it’s supposed to mark the death of the old SEND system.

The SEND reforms became law way back in 2014, but there’s been a lengthy process of transition and we’ve effectively had two SEND systems running in parallel since then.

Most children and young people with SEND these days are on the new system of Education, Health and Care Plans, (EHCP) but there are still thousands of children out there whose provision is backed by statements of special educational need, the forerunner to the EHCP. Statements still come under the previous legal system of the 1996 Education Act, and the 2001 SEND Code of Practice.

Local authorities (LAs) were given three years and seven months to transfer statements over to the new system, and there’s now only a few months to go before they’re supposed to finish the job. And thanks to a civil servant with a sense of humour, the transfer deadline is All Fools Day - 1st April 2018.

So, how are the local authorities in England doing? All told, not well. Buckle up, it's going to be a bumpy ride...

Scores on the Doors

When the SEND reforms were first implemented in 2014, there were around 237,000 children with statements of special educational need, according to data from the Department for Education (DfE).

LAs were pretty slow to get going with the transfers and by mid-January 2017, there were still over 112,000 live statements on their books. Many LAs appeared to be running out of time, and the DfE noticed. So from 2017, they told LAs to update them monthly on their progress with statement transfers.

As we enter the final few months, how are LAs doing now?

Back in November, I asked LAs in a series of Freedom of Information requests, how many live statements of special educational need they still had on their books. The short answer is “loads” – for the longer answer, read on…

See the interactive data map for your local authority

Check the map here for an interactive guide to how individual LAs are getting on: how many statements they have left to transfer, how fast they went in 2017, and how fast they need to go to get the job done by the 1st April deadline.

How many children will be affected?

How many kids does this affect? Well, unless LAs can go faster, on 1st April 2018 there could be as many as 21,000 children who won’t have been transferred over to the new SEND system – and who’ll still depend on statements to have their needs met, some potentially for years.

Rise of the Zombie Statements

So why does this matter? Firstly, this wasn’t supposed to happen, at least not on this scale, and the system isn’t set up for it. Statements of special educational need were supposed to be extinct as of 1st April 2018, replaced by bright, shiny, co-produced & child-centred EHCPs.

So what legal and practical force will a statement actually have after that date? It’s really hard to tell.

The DfE wrote to LAs in September 2017, making their expectations very clear – if LAs still have statements on their books after April, then they expect LAs to maintain the provision specified in the statement. And there’s statutory backing for what the DfE is saying, if you dig deep enough into the guts of the relevant legal text.

A Department for Education Spokesperson has made a statement saying not very much:

“Councils are making good progress in implementing these new plans, and we are giving them more than £252m over four years to help them introduce the changes effectively.

“The Children and Families Act 2014 makes clear that all special education needs statements will continue to have legal status following the transfer deadline, to ensure no families are adversely affected.”

That’s good to know – but in practice, things aren’t going to be that straightforward.

Zombie statements might be protected in theory, but it’ll be in limbo - right when LAs and schools alike are reporting huge problems with funding.

The concern isn’t so much about that provision will be whipped away from statemented kids within hours of the deadline passing – that’s not likely to happen across the board.

It’s more about the quality, quantity and appropriateness of existing provision for these children being leached away over months and years - when an EHCP is supposed to offer so much more.

And that brings us to the other main reason for concern…

So we’re staring down the barrel of about 21,000 kids who’ll still have statements when April comes. There are about 10 weeks left. Can LAs work faster to convert these over to the new system?

Well, many of them can work faster and many undoubtedly will. There’s a fair chance that some of the LAs who are off-target now will clear the backlog by April if they pick up their pace.

But the process and the end product will not be pretty - and in many cases, it probably won’t be lawful, or even fit for purpose.

Most of the time, children who have statements of special educational need will go through the transfer process and emerge with an EHCP. The DfE has said – time and again – that no child should lose any provision simply because they are moving from the old SEND system to the new one.

And the DfE has said – time and again – that EHCPs are an improvement over statements. But that’s not how things are panning out, even now.

If you talk to parents in the process, and people who are helping them navigate it, the quality of the transfer reviews - and the EHCPs that emerge from it - is mostly dreadful.

There is very clear statutory guidance in place laying out how statement transfers are supposed to work. I’ve got involved in around 50 transfer cases in the last year alone, including my own two kids’ cases. None of these cases – not a single one – has followed this guidance properly. And I have yet to see a draft EHCP that’s better than the statement that preceded it.

LAs are already cutting corners to meet the statement transfer deadlines. Some aren’t bothering to tell parents that they’ve started the transfer. Many aren’t bothering with fresh professional assessments. Many aren’t integrating health & social care input, which is one of the main things that is supposed to make EHCPs better than statements.

So are there any more corners left to cut?

Amazingly, there are. Many LAs have already outsourced EHCP writing to private firms. LA spending on EHCP outsourcing shot up by 30% in the last financial year. Outsourcing isn’t necessarily a recipe for trouble, although a lot depends on the culture of the LA that’s commissioning the work.

But there’s a new game in town. As the transfer deadline looms, LAs are bringing in temps on very short-term contracts to pump and dump converted EHCPs into the system before the deadline.

And some of the temp job adverts make for grim reading. Most require at least some experience drafting EHCPs, but applicants have variously been told that:

“This is a desktop exercise, and there is no requirement to contact the LA, or families, or young people” [East Midlands, December 2017] – remember, this is supposed to be a person-centred process!

“You will be required to draft statements, [and] notes in lieu” [West Midlands, January 2018] – these are for the old SEND system, why are they needed now?

‘EHC Plan Writer – The main objective of the role is to convert old SEND statements into EHC plans. 2-3 month temporary contract, excellent £15 per hour pay rate and performance bonus based on agreed Key Performance Indicators’ [Greater Manchester, January 2018] – not hard to guess what’ll get you the bonus…

“You will need to have the ability to write good outcomes, and deal with difficult families” [North East, November 2017] – which speaks for itself, in all its contemptuous glory…

These are vacancies for work lasting no more than a few months, and many of the daily and hourly rates are nothing for a professional to get out of bed for – the worst EHCP writer wage I’ve seen in recent weeks was £12 per hour.

It is very, very hard to imagine that lawful, person-centred EHCPs are going to come out of the end of this frenetic and disposable business model.

And LAs also have another option in their toolbox for dispensing with statement caseload. At the end of the transfer process, they might simply decide that there’s no need for an EHCP, and cease to maintain the statement.

Thus far, (with a small number of dishonourable exceptions) most LAs have not taken this route. But as pressure builds to meet the deadline, the worst LAs will be tempted increasingly to venture down this path.

So what can parents do?

This is affecting tens of thousands of parents whose kids still have statements, including mine – and as ever, we need to be more than just watchful.

The first thing you should do is read this excellent guide, written by solicitor & SNJ columnist Hayley Mason a few weeks ago.

The next thing you should do is go to SNJ’s EHCP Transfer Clinic, and ask questions there if you need to.

And if you are in the transfer review process already, watch out for the following:

And finally, as things creep closer to 1st April, some LAs are likely to try to finalise the EHCP before issuing a draft plan - just so they can say they’ve met the deadline.

But that’s where many of us are - worse off, despite everything that the new SEND system promised.

** BBC Breakfast reporter Jayne McCubbin is also be covering this story today (Tuesday 16-1-18) using our research. You can find it until tomorrow on iPlayer at 24:02 minutes into the boradcast.  here: https://www.bbc.co.uk/iplayer/episode/b09m6jmc/breakfast-16012018 Jayne has interviewed parents whose children are affected and they hope to be able to speak to the new SEND Minister, Nadhim Zahawi on this issue later in the week, so make sure you tune in***

What do you think of everything you've read here? Add your comments below on the blog