I've written about my boys' special (ist) school, More House, on several occasions before. My sons joined in 2007 and this year, our eldest, Luca, left to join a mainstream sixth-form where he is already doing very well.

Yesterday was his EHCP meeting with our Pathways advisor, independent supporter, two college Learning Support staff members, me and of course, Luca. It was exhausting but a truly collaborative meeting in which everyone participated. I'll write more about this next week, which is also the week of Luca's 17th birthday.

Even though he has left, he is still heading out with other members of the More House School Jazz Band next Easter to New Orleans to show what they can do. 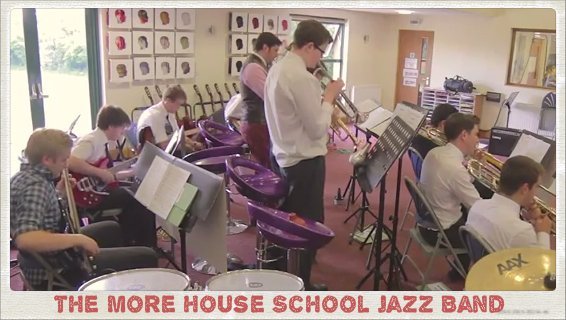 Our younger son however, remains at MHS until at least next summer after his GCSEs, but it looks like he also wants to apply to the sixth-form college.

They could have stayed in the close and protective confines of More House sixth-form but it is a testament to the support they have received there that they feel prepared for a life in a large, busy, competitive and highly successful college environment.

After I got home following the meeting, I saw a marketing video on our parents' Facebook group made by More House School that embodies the spirit of the school and I really wanted to share it to a wider audience.

Our family owes so much to this school, its teachers, staff and above all, its inspirational leader, Barry Huggett OBE. He steps back next summer to chair the Trust that runs the school as it seeks to expand and secure funding for more schools built on the same principles (if you have deep pockets, your money would be extraordinarily well spent). The new Headmaster, Jon Hetherington, has a long history at the school so for any parents who might be wondering, it is in safe hands.

Should you have a son who has Specific Learning Difficulties (SpLD) such as dyslexia, dyspraxia, ADHD or Asperger's who could use a personalised, caring environment that is ambitious for every boy to succeed, you should check it out.

Entry is not guaranteed; the school has a strict criteria for admission based on reports and assessment and it has both fee-paying students and those funded by statements of SEN. It's based to the south of Farnham, Surrey and has both day and boarding pupils.

I firmly believe that if every mainstream school was based on the ethos of More House, our nation's children would enter adulthood as well-adjusted, well-educated, nurtured and ready-for-the-world young adults - wherever they've come from. There are many fine schools in the country but there is just something special about this one that can take boys facing failure with their self-esteem in tatters and turn out bright, hopeful, well-mannered and ambitious young men.

It isn't so much about the funding (MHS costs circa £16k a year for day boys - much less than a top private non-specialist school) as much as the spirit, the pride and the community that is instilled in each boy.

But that's just my opinion. And of course, that of the boys in this clip (and Luca is the one in a checked shirt playing the bass in the band last year, post GCSEs)

If you're a MHS parent past or present, or an old boy (or teacher!) do leave a comment about how the school has helped you or your family.