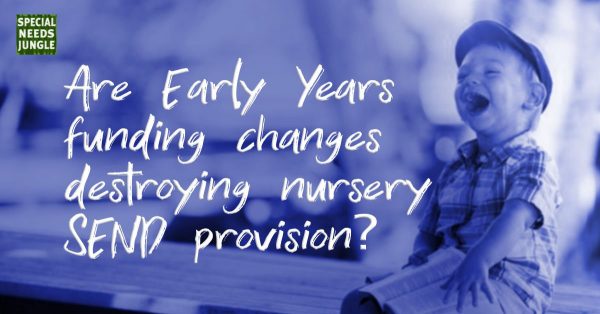 There have been a number of surveys recently about funding for council-run nurseries, with fears that their SEND provision is suffering in availability and quality. A lack of additional SEND funding (nurseries don't get the delegated £6000 for SEND children like schools do) and central government changes to how councils can use its Maintained Nursery School (NMS) funding are leaving nurseries at breaking point.

One of the biggest changes was that Government limited the funding that councils can retain for central costs from the Early Years grant to 5% from this year onwards, although councils can ask for exceptions until the next financial year. However, in the last couple of months, surveys from both the Local Government Association and from Early Education, a professional association for early years, say that unless the Government protects funding for Maintained Nursery Schools (MNS) after 2019/20,  Early Years support for disadvantaged children and those with SEND will be reduced. The Early Education survey said on average, respondents were spending £17,000 more than they received in high needs funding.

Additionally, the LGA survey points to difficulties in retaining well-qualified staff because they pay was so low. In fact, that survey revealed 61% of councils who have maintained nursery schools fear their provision will close if the funding isn’t protected. Early Education says a third of maintained nursery schools have already closed in the last 30 years (around 200 schools) with the remaining facing deep cuts as local authorities make tough decisions on budgets. Of the 400 or so which remain, their specialist expertise is also under threat as a third no longer have a full-time head teacher, which is a crucial foundation for their excellence.

Confused? You should be

The SEND Code of Practice cites early identification of SEND to be one of the most important ways to help children narrow the attainment gap. Yet these surveys seem to show that the new funding changes mean this is effectively being knee-capped because it’s impacting the availability of council-run provision and well-trained staff. As if it’s not hard enough already to find any provision for disabled children!

It’s yet another example of the push-me pull-me policies that we see across government. It seems that the ‘brains’ behind funding decisions don’t talk to those who are concerned with improving provision, inclusion and social mobility– something the Department for Education claims it is committed to.

And yet despite schools, teachers, councils and parents all reporting that there are significant cuts to funding, provision and essentials, the DfE continues the line that there is more funding for ever, not least in nurseries. Take this quote from Nadhim Zahawi, as recently reported by Helen Ward in the TES recently: "Maintained nursery schools make a valuable contribution to improving the lives of some of our most disadvantaged children. That’s why we are providing local authorities with around £60 million extra a year until 2020 to protect funding for these institutions....For children with more complex needs, local authorities can also draw on high-needs funding, which is at a record high of £6 billion across England, up from £5 billion in 2013.”

Did you find it hard to read to the end of that quote without wanting to throw your device or computer to the ground? Me too. It's like they've decided Donald Trump's fantastical grasp of the truth is the way to go. To keep insisting something is the truth because he says it is, despite what everyone else sees, is a bit like King Canute holding back the tide. However the Canute story was a misrepresentation - the King well knew that the ruler's power to keep a force of nature (like SEND parents) at bay was fake news, even if Mr Zahawi doesn't. Though he might realise it when a tsunami of angry parents and teachers rush in to sweep the government away at the next election.

Eighty-eight out of 152 councils responded to the June survey (58%) with a third (33%) saying nursery closures were ‘very likely’ with another 28% saying it was fairly likely. Almost half (48%) of the responding councils say the new cap has led, or would lead, to reductions in support for nursery providers. The LAs say as a result, they expect to increase charging for EY services and cut staff, training, support and outreach work. At least a third have already taken, or expect to take, at least one of these steps.

In the LGA study, some councils gave specific details about increased pressures for SEND services in the early years, including those accessing the 30-hours entitlement. One London council reported SEND numbers had increased “substantially” in 2017/18 year without any additional funding.

“Despite trying to be smarter in how and what we fund, we are predicting that children will either not be able to access places, or that their experiences will be compromised as a result.” – London Borough

The LGA now says it’s going to consider asking central government to extend the Inclusion Fund, Early Years Pupil Premium and Disability Access Fund to include two-year-olds – and increase funding for SEND to match the increase in the hours for those children who are entitled.

Other reasons for complaining?

Could this just be the LGA and councils whining about funds ahead of the government spending review, when they just haven’t spent what they’ve got properly? I think the other independent report suggests not. I’m sure the spending review has something to do with the timing of this but even so, if the Department for Education really wants to do what it says – increase provision, improve early identification and enable more children to be educated in mainstream settings, then it really needs to decide how it intends to ensure this happens - and on the ground  in the real world, not in its own legendary stories.