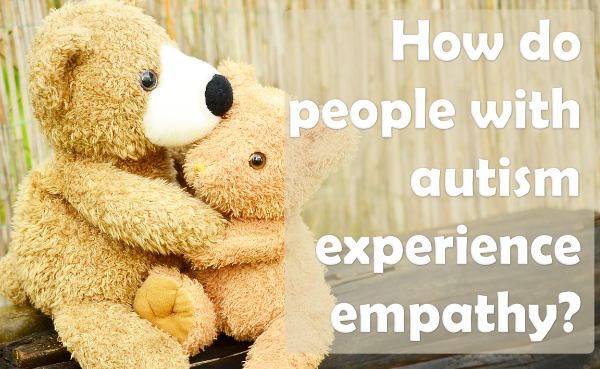 I decided to write about this as a result of an article I posted on SNJ's social media a while back about autism and empathy. It had such a great response from all our readers that it's clearly an emotive subject.

Many people posted about how their own children or themselves experience the feeling of others. One comment was, "You can’t taste the food if you don't open the wrapper," and another parent commented (about their child), "If he sees suffering of others on TV he gets really upset and even sends his pocket money in appeals to help others."

There is a lot of information on the web about whether people with a diagnosis of autism experience empathy. Although I haven’t read them all in depth (I would be there forever), I have looked through many of the articles, the summaries and conclusions of some peer-reviewed articles as well as some of the blog/information-type posts.

What seems to stand out is, not whether an autistic person (or person with autism, whichever you prefer) experiences empathy, but how they experience it.

There are a few definitions, but the one I favoured for this post is:

‘The ability to understand and share the feelings of another’

Empathy differs greatly from sympathy, which is the feeling of pity or sadness for someone else’s misfortune.

Empathy is like an intense explosion of feelings all at the same time. I don’t have a diagnosis of autism myself, although I often wonder whether I feature on the spectrum as I do have many of the traits that could lead to a diagnosis.

Growing up, I was that ‘socially awkward’ child at school, I hated discos, watched all the other children play at play-time, preferred books and the library to other children and I had a very very intense reaction to others peoples emotions. It was like I was them, that not only did I feel what they felt, but I experienced it too.

I recall many years ago, aged nine or 10, watching an episode of The Lion, The Witch and The Wardrobe and there was a scene when Aslan the lion was killed. I couldn't comprehend what had happened, not just because I was sad, but I could not get beyond what Aslan could have been feeling knowing he was about to die.

It was such an intense feeling, it was like a physical pain inside me and I could do nothing to make it go away. I had to process those emotions and it took me weeks to do so – possibly because I didn’t have the emotional intelligence to know exactly what I was feeling. Even now as I write about it I can recall the feeling I had back then. How weird is that, all these years later, over a TV programme?

It is also something I notice in my youngest son. From what Monty has told me, his need for having structure and visual support at home is not because he lacks the ability to ask what is happening, but because he needs to feel safe.

If Monty does not feel safe, he is bombarded with emotions such as anxiety, confusion, bewilderment, fear, defensiveness, distress, disappointment, shame, vulnerability and worry - and these are probably just a few of them.

Now imagine if those all hit at the same time...

Then imagine that you interpret the emotional sensation as your whole sense of being. That rather than feeling anxious and having the ability to process that feeling, you become that feeling in its whole overwhelming state. And of course feelings bring with them a physiological response from our bodies too… ‘sick with nerves’, ‘red faced with embarrassment’, ‘jelly legs with anxiety’, ‘head pounding with stress’, ‘heart racing due to fear’... this list could go on and on.

So imagine what that must feel like if you have autism too. How would you respond? What would be your instinctive reaction?

I think I would want to switch off, which I don’t think would be an uncommon or unreasonable reaction. Hence why it might seem that some people with autism are not empathic, it perhaps isn’t that they are not, but that it is too scary to even try to be.

Think of it this way: a typical and an atypical response to a feeling… such as, 'There is a spider in the lounge and I feel anxious because I feel scared of the spider.'

This is probably a pretty typical reaction to a fear. You have understood what the fear is and the feeling that goes with that fear.

However what if your reaction to fear is to ‘melt-down’? For example: 'There is a spider in the lounge and now I don’t know what I am going to do because I feel this feeling and I don’t know what to do with it’. This could be described as an 'atypical' reaction where you cease to identify yourself separately from the emotion you are experiencing and all rationality vanishes.

This is why some therapies for people with an autism spectrum disorder (ASD), focus on exposure or cognitive behavioural therapy (CBT) type therapies as it allows a little of what is scary to be examined so that the emotions can be experienced bit by bit, which can be more manageable for the individual.

If wholly successful, it can allow you to understand that you are not your emotion; that you do have the ability to learn and understand what you are feeling. It can stop feelings and emotions snowballing.

Dealing with emotions are something I have learned over time. Don’t get me wrong, I knew the basics happy, sad, embarrassed that sort of thing, but I needed a little more fine-tuning to understand and learn all the ones in-between (hence my reference to my own ASD traits)

Did you know there are over 60 different feelings?

So, back to Monty, if he feels safe then he feels calm. He feels safe at school, that I do know because he tells me all the time - he loves his school!

So, at home he is trying to recreate his school premises – his favourite topics at the moment are call point buttons, door codes, fobs and fire alarm systems. So what he wants us to do is to install all these safety systems at home, which of course is not completely possible.

We have provided reassurance about having smoke and carbon monoxide alarms, a key safe and a CCTV system, but obviously we can’t go the whole hog with door-entry systems throughout the house. In fact, this discussion has caused its own problems as carbon monoxide wasn’t a problem to Monty until we mentioned it to him...

So, we have devised a social story to help Monty understand that he is safe at home. Some days it works, others day it doesn’t.

So you can see that it's difficult for Monty to feel empathy if his senses are overloaded so much. He's always at his maximum coping capacity and he can't take on anyone else's feelings. I think many of us will feel a familiarity with this.

Another difficulty for Monty is his perception of voices. He often perceives loud voices as being angry voices, and he immediately feels unsafe and looks for cover -although at school he tells me he disappears in his head.

If we are at home finding cover means in my bed, so we rarely get a full night’s sleep in our house. If we are out, it will be in the car or somewhere that is not crowded and not outside. We have adapted pretty well for his needs to be honest.

There are many scenarios that cause Monty to feel unsafe as the world is a pretty unpredictable place to live. As his parents, we do our best to use the most appropriate ways to support Monty needs for reassurance, whether this be visual clues, regular verbal reminders, or social stories.

I'm not sure if he will ever be able to regulate these sensory anxieties enough to cope with some one else's feelings in a traditionally empathetic way, but he does recognise when I'm upset so this is a good start.

We get it wrong sometimes, often really, but the important thing for us is that we learn from these mistakes and try to not repeat them if possible. We are only human and that is very important to remember that. For us all...