A report published by Young Epilepsy says one in three schools in England are effectively breaking the law by not having Individual Healthcare Plans (IHP) in place for children with the condition. And this will also apply for other medical conditions as well.

The Children and Families Act 2014 brought in provisions to ensure that children who had long term conditions such as epilepsy, diabetes and so on, did not end up missing out on education or being at risk of harm if their conditions deteriorated while at school because staff did not have the proper training. 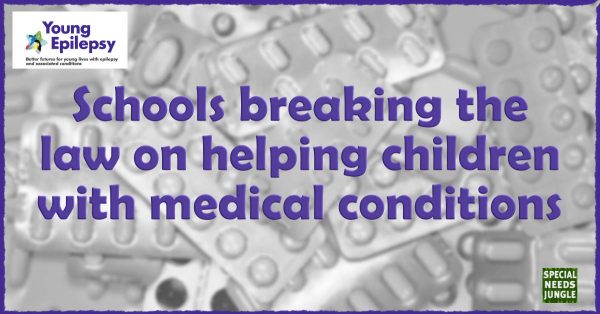 However, this report, part of Young Epilepsy’s ‘Rules 4 Schools’ campaign, says that less than half of families who have children with epilepsy said their school had a policy on supporting pupils with medical conditions. Additionally, one in three children with epilepsy (36%) don’t have an Individual Healthcare Plan (IHP) in school. Two out of three children’s IHPs do not consider how epilepsy affects learning. Families commented on limited resources for school support and limited knowledge about epilepsy having an impact on children’s school lives.

Young Epilepsy, and we second this, is calling for every mainstream school to follow the law on medical support to ensure that children with epilepsy (and other conditions) are safe and included alongside their peers.

“One teacher excluded my daughter in a competition because they thought she was being silly (she was six then) but she told me she was having a seizure at the time.”

“On one occasion due to lack of understanding of the condition I got told by my daughter's old teacher "I don't think she has epilepsy she just chooses not to do her work" this was after a meeting a specialist epilepsy nurse had gone into school to help give school a better understanding of her condition!”

“I wrote the risk assessment for her swimming lessons after the blanket one they did was awful and totally useless. Her 'watcher' at swimming was helping another child with their hat when mine had an absence [seizure] in the pool.”

What are the rules about children in school with medical conditions?

In England, there is statutory guidance in place for schools for children in school who have medical conditions like epilepsy, diabetes or any other condition. It came in as part of the Children and Families Act 2014. These standards mean that all children with medical conditions should have an Individual Healthcare Plan (IHP) and school staff should be trained to meet their needs. Schools also need to take into account how a young person’s condition might affect their learning.

You DO NOT need an Education, Health and Care Plan to have an IHP and your child DOES NOT need to have any other special educational needs outside of their condition. There is no assessment to 'qualify' for one, just speak to your school and give them the information it needs about your child.

The DfE guidance states that:

[IHPs] should be developed with the child’s best interests in mind and ensure that the school assesses and manages risks to the child’s education, health and social wellbeing, and minimises disruption.

Schools can find templates for drawing up Individual Healthcare Plans that cover parental agreements and records for the administering of medicine, staff training for medicine administration and a model letter inviting parents to contribute to individual healthcare plan development. So really, there's NO excuse not to have the right documentation, training and information in place.

There is also a page that details other laws, resources and guidelines that schools must follow to ensure that children with medical conditions are not discriminated against.

Children are covered by other guidance and legislation in this regard too such as the Equalities Act and, for children off sick long-term, Education for children with health needs who cannot attend school.

“It is deeply concerning that many schools in England still aren’t complying with the legislation that was intended to give parents reassurance their child will be properly supported whilst in school. Even when the right systems are in place children with epilepsy are affected by lack of understanding about their condition. We heard from one family that their child was asked to wear a sash in the playground so they could be easily identified.

“Health conditions such as epilepsy must be taken seriously in the education system. It is important that health support provided is routinely checked as part of school inspections. Schools should also be required to publish their policies online to assure parents and young people of the support that is available to them.

“Some conditions are more complex than others and it is important that every child is treated as an individual without the additional and avoidable barriers that prevent them from achieving their full potential.” Carol Long, Chief Executive of Young Epilepsy

Young Epilepsy have done a great service by carrying out this survey with parents to see just how far this guidance in the CFA is being carried out. They have, naturally, concentrated only on epilepsy but it concerns other chronic, long-term conditions as well, so well done to YE.

I hope you would join their call and I urge all school leadership teams to consider what they would want if their own child had a medical condition that they needed school to be on board with, or if they were too ill to attend. What would they want for their child? Then make sure it happens in your school. It ain't rocket science.

What you can do

The report cites some great school practice quotes from parents:

“[The school] have a yearly assembly so [my daughter] and the head teacher can tell the school community about epilepsy and what they need to do if she has a seizure. They are great.”

“I asked [the teacher] to show [a film] and talk to my daughter’s friends after she had a seizure in the playground. It made a huge difference to my daughter feeling 'normal' and helped her friends feel less frightened and know what to do.”

Holistic support from the school:

“The secondary school contacted us ahead of him joining them as they had received paperwork from the school nurse. In the summer term ahead of him joining in the September, we met with them and they drew up a comprehensive IHP and every teacher who would teach him was given full details of his condition and details were also passed to the SENCO and the emotional welfare department. An open communication system has meant that we have been able to update and be updated regularly by email/telephone.”

See, it can be done easily and well, with some thought. There are other examples in the Epilepsy support in schools report

Links in this article