In my most recent post on SNJ, I talked about how difficult it can sometimes be to identify when a child is having difficulty understanding and I offered some general principles for helping with comprehension, at home or in a classroom.

A child who is struggling with expressive language is not always so difficult to spot (though it can get harder as they get older and becomes better at hiding the problem!) However, just because it’s easier to see that a child is struggling to get their message across, it doesn’t mean that it’s always obvious how best to support them. How can we involve the child fully in conversation, without putting too much pressure on them? Here are a few ideas:-

Check that the child understands

Wait a minute – I just said that I was talking about expressive language! That’s true, but the two are often linked. A child who has difficulty finding the words they want to say, or structuring sentences, can sometimes struggle with understanding vocabulary and grammar as well. Make sure they understand what you’re talking about.

We all feel more pressured if we need to say something quickly. And if you’re anything like me, the time you need to convey something under pressure, is the time when you find that your mind goes blank, and you just can’t find a succinct way to explain what you mean. I’m sure I’m not the only one who has sat in an exam hall only to find myself struggling to answer a question that I know I could have answered the day before. Take time yourself over what you’re saying and pause lots. When possible, let the child know that there is no rush. You can do this either by directly saying it or just by letting your own voice and body language give the message. We all tend to imitate back the way that someone talks to us, so think about slowing your own rate of speech down just slightly to make the child feel less pressured. 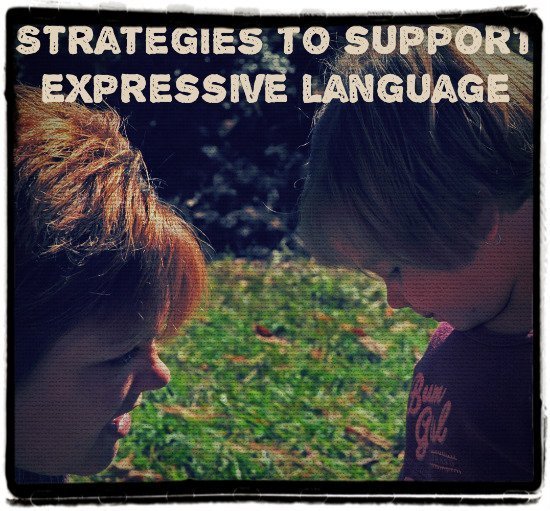 This is a trap I still find myself falling into, as it’s so easily done. You really want to encourage a child to talk so you ask them questions: “What did you do?” “What’s this?”, “Where are you going?”…. That’s fine up to a point, but it can become a bit like an interview rather than a conversation and again, the child can feel quite under pressure to speak. This in turn can make a lot of children clam up. After all, who wants to be constantly made to do something they find difficult?! Often, a better way is just to comment on what’s happening instead. When a child is playing freely, give a simple commentary on what they’re doing eg “the train’s going over the bridge…. Choo choo…. Oh no, crash!” This works because you’re giving the child the words and phrases they might want to use in a far less pressured way as well as talking about what they’re interested in. Leave lots of pauses too and you may find the child soon starts to fill them.

This is one of those nice speech therapy words that I’m not sure make a lot of sense to other people sometimes. Certainly when I asked my husband to proof-read something for me that talked about modelling, he wondered why we were building models! What I mean is show your child how to say things. It’s usually best not to keep correcting them or telling them that what they have said is wrong, but (assuming that you understand what they meant) say it back to them with the errors corrected so that they can hear a good example. So if a child says “I goed to the park”, I might say “yes, you went to the park”.

This goes nicely with the “modelling”! When you’re saying a sentence back for a child to hear, add another word or two to what they said. It’s important not to go overboard with this – the idea is just to show them language one stage further on than what they are currently able to say. So, if a child says “sit on chair” I probably wouldn’t respond with “yes, that big teddy looks really comfy sitting on that soft chair”, but I might say “yes, teddy’s sitting on a chair”.

Often when faced with a question, a child with a language difficulty knows the answer but can’t think of the words they want to say to respond. Offering a choice of two things reduces the options and helps to cue them in to the vocabulary they want. For example, it’s easier to answer “do you prefer ice-cream or chocolate?” than “what’s your favourite food?” (unless you’re me that is – I love them both!...)

Use other ways to communicate as well as speech

Children who struggle to communicate verbally can often be really helped by using other ways to communicate as well as speech. This may include signing, gestures, pictures, communication books or other devices. Whatever method you are trying to encourage a child to use to supplement speech, the best way to encourage it is to use it yourself.

Whatever language a child needs to learn, the best way to learn it is in context. If you’re teaching past tense verbs the best way to teach them is to talk about what has just happened. If you’re teaching idioms, the best way to teach them is to use them in an appropriate context and then explain what they mean. If you’re teaching new vocabulary, use the words as often as you can yourself in context. We all need to hear a new word lots of times before we remember it. This is even more true for children with speech and language difficulties. Use a new word, then use it again. Refer back to it later that day. Try to use it again a few days later. The more a child hears the word in context the more likely it is to be stored well in their brain and found more easily when they want to use it.