This report came out this week and we've now had the chance to write about it and we'd love to hear your views too at the end. 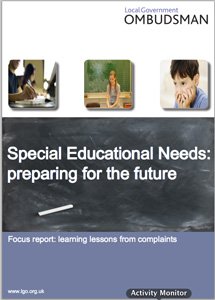 The report, by the Local Government Ombudsman, calls for fair treatment for SEN children and their families and the support to which they are entitled.

In case you're wondering, the LGO offers a free service to investigate complaints about councils and some other services such as education admissions appeal panels and adult social care providers.
This report, "SEN: Preparing for the Future" (direct pdf download here), highlights a number of examples of complaints about unlawful exclusion (see Ambitious About Autism campaign about this subject) children being denied specialist support, and many having their education opportunities limited because of long delays.

The LGO says last year it received more complaints about education and children's services than any other area.

"A common phrase we hear from families when resolving a dispute about SEN is that it feels like a constant battle. It should not be this way. When things go wrong it is vital that councils act quickly to avoid children being disadvantaged."

None of this will be news to parents like us who have often lived those very circumstances. And it is no coincidence that the report is published just weeks before the Children and Families Bill is to be signed off by Her Majesty. In fact, the report pretty much makes clear it's a shot across the bows to local authorities.

"As with any new legislation its success will be dependent upon the way the changes are implemented. By publishing this report we aim to inform the way councils approach the new legislation by highlighting some of the problems that have occurred under the current arrangements. By learning the lessons of the past I hope that future mistakes can be avoided"

In the report, the Ombudsman, Dr Jane Martin, welcomes the Government’s recent amendment to the Children and Families Bill to undertake a review of how well the appeal arrangements are working and its commitment to look more widely at how other complaints that are relevant to education, health and care planning are handled.

She says, "...A clear and accessible route to redress should underpin these new arrangements and [I] look forward to contributing to that review by sharing our experiences of resolving complaints."

To me, this says Dr Martin is determined that the view of complainants are looked at and learned from, rather than the government just treating the review as an academic exercise. And I'm quite sure the DfE does realise by now that everything about this Bill is being carefully scrutinised by disabled children's charities, SEN lawyers and parent representatives.

It is this scrutiny that has brought positive changes, even at the last minute, to the Bill, but it is also clear that the timing of elections and pressure from individual politicians have had a negative impact as well.

Additionally, and here I am voicing a widespread but often unspoken concern, is the question of how being funded by the DfE affects the actions of certain charities and now, parent carer forums. The question posed by some cynics is, are they/will they be less willing to forcefully challenge the government and in some cases their local authorities when their funding depends on good relationships?

Those concerned would say as resounding 'no'  and it's to be hoped that the relevant funders value an opposing viewpoint so the best decision is made. In any case, where else can the money come from to ensure that the parent voice is heard?

This is a very useful statement for parents and advocates to remember when a statement or EHCP has been issued and it may be useful to remind the LA SEN department of it, so the staff know and, importantly they also know that you know.

The ombudsmen report also proposes a series of questions that councillors and committees can ask of their local authorities when scrutinising the delivery of services for children with SEN, as well as sharing a number of recommendations based on good practices seen in councils across the country.

A parent can usually only access the Ombudsmen service once they have exhausted the council's own complaints procedure, the SEND Tribunal process or a Judicial Review or other court proceedings, where appropriate. However, when they do look into a case, they can award damages to the family and I would recommend that you read this report for examples of these in action.

Its recommendations to councils for the future are based on best practice it has observed:

You can read the Ombudsmen's own précis here. The report is linked from the top right of that page. Do you think this report will make a difference?