If your child has been diagnosed with autism and you’re wondering what could have caused it, I would strongly recommend that you do not go searching for the answer on the internet.

Over the years writing for SNJ, I’ve come across countless medical articles based on new studies or research that say this could be a ‘risk’ factor for autism, or that can increase the likelihood or is implicated in ASD or  learning disabilities.

I’m sure it’s a fascinating subject to many researchers, but if you’re a parent of a child with autism or actually autistic yourself (I am both) what will concern you more is not what caused it, but who is going to help you cope with it. Maybe some of those research funds could be better spent on providing services for those people living with autism instead. 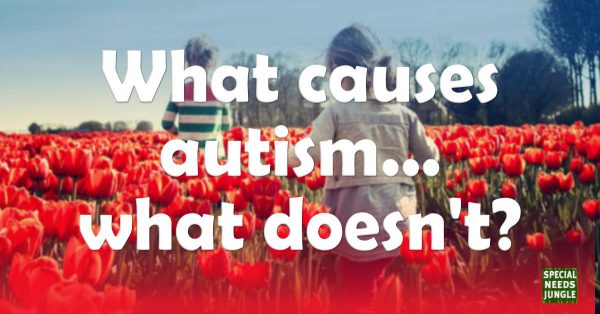 For a newly diagnosed family wondering 'why', the lack of information and local resources you may be given by your doctor is quite likely to send you looking online for support or reasons. But you may well end up more bewildered than before you started if you start trying to explain how this happened.

By way of example, I did a brief search just on one site, Medical News Today, which often writes up medical research as articles. Most often the original research paper is locked behind a paywall and even if it wasn't, they are written in such technical terms that it's hard to understand what they mean. There is so much information being pumped out these days, I sometimes wonder if much of it ever gets read by more than a handful of people anyway. It also means it's hard to know immediately what is the most rigorous, peer reviewed, serious research.

Here are just some of the "potential" causes or risks for autism that an array of research articles have recently flagged:

And I haven’t even touched on the V word, whether you think it’s definitively been put down and buried six feet under, or whether you cry conspiracy and suppressed studies showing otherwise. And both sides have become are so rabidly vociferous that at any mention of the word ‘vaccination’ on our Facebook page and we are besieged by angry voices on both sides.

Some even go so far as to criticise us for even mentioning it in any context, which I find utterly bizarre. It's almost become a no-go area and this cannot be good. (By the way, while respectful discussion is always welcomed, the next person who trolls us like this will be banned from the Facebook page/Twitter/website immediately, so be warned)

One thing we DO know causes autism is Epilim, unwittingly taken by women with epilepsy during pregnancy, having been told it was safe. This came to light thanks largely to the FACSA campaign led by my online friend, Emma Murphy. The drug now carries a warning label, but there are concerns that the message isn't getting through to young women.

But it's mostly genetic...

We also know that autism has a large inherited genetic component. If one person in the family has it, it's quite likely there are others, whether diagnosed or just suspected. In fact, another new study, reported in The Independent newspaper concludes that Autism is mostly caused by genetic factors, with, "heritability of the condition 33 per cent higher than previously thought."

This study was a reanalysis of data from a previous study on the familial risk of Autism Spectrum Disorder (ASD) and it estimates the heritability to be 83 per cent, according to a study published by JAMA.

The large analysis included 37,570 twin pairs, 2,642,064 full sibling pairs, and 432,281 maternal and 445,531 paternal half-sibling pairs.  Of these, 14,516 children were diagnosed with autism, and the heritability was estimated as 83 per cent, while the non-shared environmental influence was estimated as 17 per cent.

So although that may account for the vast majority of cases of autism, the other 17% still have some explaining to do. In other words, there are more causes than just genetics. In fact, it can seem that just living and breathing is a risk factor for the group of symptoms and behaviours grouped under the autism spectrum.

Aside from Epilim, there will be children with sensitive immune systems that were compromised by any number of environmental or toxicological factors. Additionally, a US drug company is combining with a leading US university in an effort to find a conclusive link between autism and the gut, another thing that is long suspected by many - the 'leaky gut' syndrome.

My tips for dealing with autism research

What causes autism is always going to be a thorny subject for many, but if you want to explore it more, my tips are:

It's not your fault

Most of all, realise that whatever the cause, it isn't your fault. Your job is to take the child you have and spent your energy getting the best help that you can for them, whether educational, social or physical and most likely all of those. Don't blame yourself, that's a hiding to nothing and it will only impair your mental and physical health worrying about it.

Finally, realise that, for the most part, it's not how you got there but where you're going from now. So ignore the medical research and instead, be your own researcher for your child. That means noting things such as food intolerances that may exacerbate the condition, thinking about if there may be other co-morbidities, such as ADHD, anxiety or hypermobility that also need therapy or treatment or  detecting any sensory sensitivities that can cause meltdowns and thinking about how to help. And course the big E, getting the right educational environment.