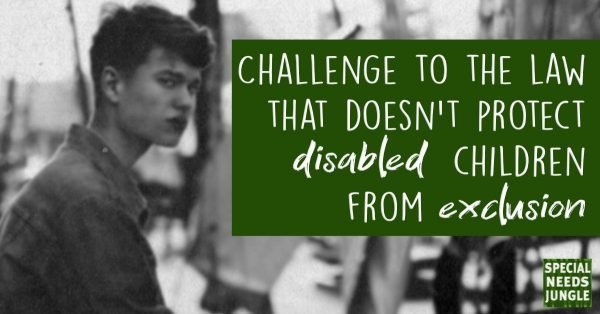 Parents of an autistic teenager are going to the Upper Tribunal today to appeal a decision that they say discriminates against children with autism.

Thirteen-year-old 'L', from Derbyshire, was excluded from school due to behaviour which was linked to his autism. The case has already been considered by the First Tier Tribunal, which is where challenges of discrimination against children in schools are heard, but wasn't successful. The Judge at the FTT found that L’s exclusion was for behaviour that, under current rules, meant he was not considered to be disabled for the purposes of protection under the Equality Act.

The rules (Regulation 4 of The Equality Act 2010 (Disability) Regulations 2010) state that children with similar conditions to L, lose the protection from discrimination under equality laws because their challenging behaviour is said to be ‘a tendency to physically abuse’– even in cases where the behaviour itself is a direct result of the child’s condition. This means children like L are not treated as ‘disabled’ in relation to their physically aggressive behaviour.

The family's lawyers, Irwin Mitchell’s Public Law and Human Rights team and specialist barrister, Steve Broach from Monckton Chambers, will argue this exclusion discriminates against disabled children with conditions such as autism that are more likely to result in challenging behaviour.

Statistics show that children with special educational needs account for almost half of all exclusions in schools. However, the lack of protection under the Equality Act means that schools are not required to justify that a decision to exclude disabled children in these circumstances is proportionate. Neither do they have to have made reasonable adjustments to support the pupil so that the challenging behaviour might be prevented or reduced.

Polly Sweeney, Human Rights Partner at Irwin Mitchell who is representing the family said: “This appeal is about the fundamental right of access to education for disabled children whose conditions, like autism, result in behaviours which can be physically aggressive.

“The legal definition of ‘physically abusive’ has been stretched to the point that it means disabled children even as young as six or seven who may have only displayed low-level physical aggression on a handful of occasions, or even just once if the physical aggression was significant, are denied protection from discrimination under the law. The impact of disabled children being excluded from schools, not just on the child and its family, but on the wider society, is serious and far-reaching. We know that children who are excluded from school are more likely to end up in the criminal justice system, and less likely to enter into employment and training.

“We do not believe this was Parliament or even the Government’s intention when the current rule was introduced and we will be asking the Tribunal to find that the way the rule has been interpreted so far breaches our client’s human rights.

“It is important to make clear that this finding would not mean that schools are prevented from excluding children where it is necessary and proportionate to do so. However, it would ensure that all disabled children are afforded the same safeguards, protections and rights under the law regardless of whether their disability gives rise to challenging behaviour.”

The appeal is supported by the National Autistic Society, which has been joined as an interested party because of the particularly negative impact of the way in which the rule has been interpreted on children with autism.  It comes after a parliamentary committee recommended in 2016 that the rule be amended so as not to apply to children with autism and other recognised impairments.

L’s parents added: ‘We believe passionately that our son and other children in his position should have equal rights to be able to go to school and receive the support they need to achieve the best possible outcomes.

“L’s autism means that he will grow up in a world where he will face challenges and adversity throughout his life. School should be somewhere he can go without fear of discrimination or exclusion for actions which he has no control over. These rules currently prevent that and we hope the Tribunal will do what is needed to correct this inequality.”

The appeal is being brought with assistance of funding from the Equality and Human Rights Commission. It will be heard in the Upper Tribunal in London on 3 and 4 July, 2018. The Secretary of State for Education has been joined as an interested party and is opposing the appeal.

In fact, there was a previous attempt to close this apparent legal loophole in Parliament in 2016, when Martin Vickers MP presented the School Admissions (Special Educational Needs) Bill

There appears to be a loophole in the law that does not consider challenging behaviour linked to a child’s disability as an impairment. If their disability could result in aggressive behaviour towards others in the school, the law on disability discrimination does not help them, and some governing bodies use “tendency to physical abuse of others” as a reason not to meet the needs of an autistic child and to exclude them. Of course, governors have a duty to others in the school, but it can sometimes be easier to refuse admission than to facilitate a solution....

...."Independent Parental Special Education Advice and also by the Alliance for Inclusive Education. Section 501 of the report states that those organisations

At the time, Mr Vickers quoted the government's response to a 2016 Lords Select Committee on the Equality Act 2010 and Disability report evaluating the impact of the Act on disabled people.

“Our Special Educational Needs and Disability (SEND) Code of Practice makes it clear that teachers should look beyond disruptive or challenging behaviours to determine whether there are underlying issues or disabilities and put appropriate support in place. . . The department’s exclusion guidance also sets out that early intervention measures should include an assessment of whether appropriate provision is in place to support any SEN or disability that a pupil may have. It makes clear that schools should consider the use of a multi-agency assessment for pupils who display persistent disruptive behaviour, which could include pupils who have unidentified SEN. Schools should arrange such assessments when concerns arise rather than waiting for a specific trigger.

Although there remain strong public policy reasons behind the excluded behaviours, the Government has listened to the issues raised by the Committee and will consider how the exemption around ‘a tendency to physical abuse of other persons’ applies to those under 18 in an education context.”

This Bill was expected to have its second reading debate on Friday 12 May 2017. the General Election was called and Parliament was dissolved on 3 May 2017, meaning the Bill failed to progress.

Perhaps it's time for this Bill to be re-presented?