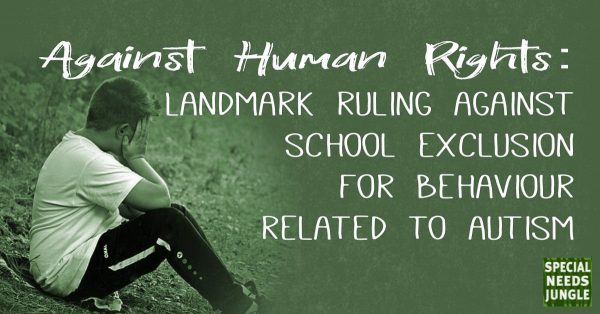 Thousands of children with disabilities will now be properly protected from discrimination in schools after a landmark ruling found the government’s equality laws are unlawful.

Just over a month ago, we ran a story about a family's challenge to the law that didn't protect disabled children from exclusion.  13-year-old 'L', from Derbyshire, was excluded from school due to behaviour which was linked to his autism. When heard at the First Tier Tribunal, the Judge found that L’s exclusion was for behaviour that, under current rules, meant he was not considered to be disabled for the purposes of protection under the Equality Act.

Those rules (Regulation 4 of The Equality Act 2010 (Disability) Regulations 2010) stated that children with similar conditions to L, lose the protection from discrimination under equality laws because their challenging behaviour is said to be ‘a tendency to physically abuse’– even in cases where the behaviour itself is a direct result of the child’s condition. This means children like L are not treated as ‘disabled’ in relation to their physically aggressive behaviour.

Statistics show that children with special educational needs account for almost half of all exclusions in schools. However, the lack of protection under the Equality Act meant that until this court ruling, schools were not required to justify that a decision to exclude disabled children in these circumstances was proportionate.

After the FTT case, leave was granted for an appeal to the Upper Tribunal and the case was argued in July by Polly Sweeney from Irwin Mitchell solicitors and their Public Law and Human Rights team, along with specialist barrister, Steve Broach from Monckton Chambers. They argued that the exclusion discriminates against disabled children with conditions such as autism that are more likely to result in challenging behaviour.

Yesterday, Reg 4(1) of Equality Act was ruled to be against human rights law and that schools should not be excluding kids on the basis of a 'tendency', if their behaviour is related to their autism.

The legal team had argued that the legal definition of ‘physically abusive’ had been stretched so that schools could exclude six or seven year old autistic children, who may have only displayed a few instances of 'low-level' physical aggression without being accused of discrimination. Polly Sweeney had pointed out that the favourable ruling yesterday doesn't stop schools from excluding children where proportionate, but it would ensure that all disabled children are afforded the same safeguards, protections and rights under the law regardless of whether their disability gives rise to challenging behaviour.

What did the judge say?

Judge Rowley, sitting in the Upper Tribunal, who was tasked with examining whether this rule was in breach of L and other children’s human rights, found that this rule came “nowhere near striking a fair balance between the rights of children such as L on the one side and the interests of the community on the other”. Judge Rowley, recognising that “aggressive behaviour is not a choice for children with autism” said:

“In my judgment the Secretary of State has failed to justify maintaining in force a provision which excludes from the ambit of the protection of the Equality Act children whose behaviour in school is a manifestation of the very condition which calls for special educational provision to be made for them. In that context, to my mind it is repugnant to define as 'criminal or anti-social' the effect of the behaviour of children whose condition (through no fault of their own) manifests itself in particular ways so as to justify treating them differently from children whose condition has other manifestations.”

“We are delighted with this outcome and pleased that the Upper Tribunal has recognised in strong terms that the profound and severe discriminatory impact that these rules have on vulnerable children such as L when accessing education is unlawful.

“As has been made clear in the judgment, this decision does not mean that schools are prevented from excluding children where it is necessary and proportionate to do so. However, it will ensure all disabled children are afforded the same safeguards, protections and rights under the law regardless of whether their disability gives rise to challenging behaviour.

"L’s parents’ strength and determination in pursuing this appeal on behalf of so many children is admirable and were it not for their tenacity and courage, we would not have the decision we have today.

“We also wish to take the opportunity to thank both the National Autistic Society who provided important evidence to the Tribunal as an interested party and the Equality and Human Rights Commission, without whose funding this appeal could not have been brought.”

"We are both delighted by this ruling. We have always believed passionately that our son and other children in his position should have equal rights to be able to go to school and receive the support they need to achieve the best possible outcomes. L’s autism means that he will grow up in a world where he will face challenges and adversity throughout his life. School should be somewhere he can go without fear of discrimination or exclusion for actions which he has no control over. Knowing that one of the key rules that prevented that has now been found to be unlawful is of great comfort to us, and we hope, many other families." L's parents

Reaction from the National Autistic Society

The National Autistic Society got involved to help bring the case to appeal. It intervened because it believed there was a loophole in the law that meant schools don’t have to make reasonable adjustments for disabled children when they have a “tendency to physical abuse”, even when that behaviour is down to a lack of appropriate support. The NAS hoped that by being involved, they could help change the law so that autistic children get the support they need in school.

“This is a landmark verdict which could transform the prospects of future generations of children on the autism spectrum, by helping them get the education they deserve. The Government should recognise this decision and act immediately to make sure that autistic children are no longer unfairly excluded from school.

"We intervened in this case to try to close a legal loophole, which saw far too many children excluded from school. Before this judgment, schools were able to exclude pupils who have a ‘tendency to physical abuse’, even if the school had made no adjustments to meet their needs.

“There are around 120,000 school aged children on the autism spectrum in England. Being autistic means someone sees, hears and feels the world in a different, often more intense way than other people, which can make school an overwhelming place. Without the right support, things like having a quiet place to retreat to when it gets too much or adapting communication strategies to their needs, autistic children can become highly anxious. In some cases, children can become so overwhelmed that they can’t control their behaviour, which others can misinterpret as them being naughty or disruptive, when in fact they're extremely distressed.

“Exclusions should only happen as a last resort, when schools have tried every other practical solution. But the loophole meant that there was not enough incentive for schools to make necessary reasonable adjustments. And some schools resort far too quickly to exclusions. This contributes to children on the autism spectrum being three times more likely to be excluded than children without special educational needs.

"Exclusions can have a devastating and life-long impact on an autistic child, holding back their learning and emotional development, as well as their long-term prospects. We hope the Government will respect the court’s well-considered judgement, make any further changes to the law if needed and give hope to thousands of autistic children and their families.”

“The level of exclusions of pupils with a special educational need or disability has risen dramatically in the last few years and they are now almost seven times more likely to be permanently excluded than other pupils. We funded this case as we were concerned that children whose disability can result in them being more likely to be aggressive were being unfairly denied access to education.

“We are delighted with this judgment which will require schools to make reasonable adjustments to try to prevent or manage challenging behaviour and justify that any exclusion in these circumstances is proportionate. This is a positive step towards ensuring that everyone has the opportunity to reach their potential through education and increasing the inclusion of disabled children in mainstream education.”

Has this happened to an autistic child in your family? What does this ruling mean to you and what action might you take as a result of the ruling? Let us know!