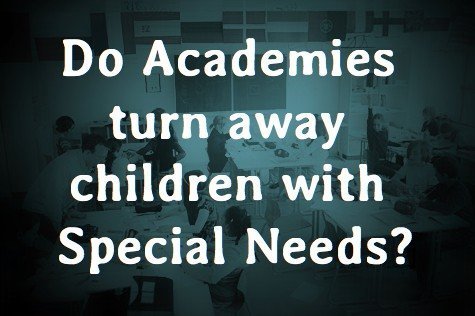 In an article on 3rd January, The Independent reported comments from Anna Feuchtwang, Chief Executive of The National Children’s Bureau, regarding, "...anecdotal evidence that academies are more reluctant to accept children with special education needs unless they have an education, health and care plan already in place.” The article also quoted Richard Rieser of World of Inclusion, which provides training on implementing disability legislation, as saying, “I have heard lots of anecdotal stories of people with special needs being turned away [from academies].”

Knowing that I work for a large academy trust, Tania got in touch with me and asked if I’d make some comments for our Special Needs Jungle readers. The truth is it's hard to untangle an accurate picture on this, but here are some thoughts:

Academies are required to admit children with Education, Health and Care Plans (EHCPs)

Academies are under the same duty to admit a child if they are named in an EHCP as any local authority school. If they really do not wish to admit the child the only option they have, which schools don't, is to refer the admission directly to the Secretary of State - and that's quite rightly rarely used.

There should be no difference in admission practices, and no academy should be able to refuse admission of a child with an EHCP, if it is named in the paperwork.

I wouldn’t be surprised….

So that brings us to children with special needs who don't have an EHCP -which is what the original article was about. I am going to state quite clearly from the outset that from what I’ve heard I wouldn't be surprised if this was the case, but before we go any further I just want to say a few words about the use of the word 'academies' as a generic term.

'Academies' are schools which are not under local authority control. There are about 5,500 of them in England out of a total number of c.23,000 schools, so they represent just under a quarter of all schools. There are circa 550 multi-academy trusts, which are groups of academies operating under a single overarching 'Trust', of which the largest (the one I work for) consists of 67 academies. The smallest multi-academy trusts have just 2 or 3 member academies.

There are then of course all those stand-alone academies which are not part of larger trusts. Each academy and academy trust will have its own distinct philosophy and operating practices. Some will be highly inclusive (some have special schools as part of the trust and I know at least one which is made up of a group of special school academies) and some may 'appear' or dare I say 'be' less inclusive. With academies there's always politics because the academy programme is a government driven initiative with the expectation that all schools will eventually become academies. My point is that we can't use the word 'academies' as though they are all the same, just as we can't say schools are all the same. We need to qualify with 'which academies?',  'which trusts?', ‘which schools?’

To emphasise this point, in my time I've come across plenty of examples of schools which are non-inclusive, either in their philosophy or in their practices. I've even come across non-inclusive special schools in the sense that have tried to avoid taking children with more complex needs or, on the basis of paperwork, decided that they can't admit a child without meeting them or the parent.

I've heard some stories about academy trusts opening pupil referral units which are used to 'move out' children with special educational needs (without actually excluding them). I've heard that some academies (and schools) don't want to take special needs children who may lower their academic results. When you come from a philosophy that values all children equally and thinks that we have to do even more for those who have special educational needs,that's really hard to take.

Does our education system value all children equally?

For children with SEN, those who exhibit challenging behaviour and those from disadvantaged backgrounds, there is some evidence that as they approach GCSEs they are removed from school/academy rolls. An article in The Guardian on 21 January 2016,  reported concerns that league–table pressures were acting as an incentive to moving students unlikely to perform well off of the school roll. Some schools are thought to use ‘unofficial exclusions’. The numbers of pupils educated in both pupil referral units and special schools is on the rise. In a speech to the Special School Summit on 26th January, I said that special school numbers have risen by over 13,000 in the last five years.

So what’s behind all this? We have a system which incentivises schools around attainment data. Schools and academies are generally judged on the attainment of their pupils and not on their progress or the difference they make to children’s lives over time. This is non-inclusive in itself because it values higher attainment and places greater value on children who achieve higher results.

Academies and academy trusts are coming under particularly strong scrutiny in this regard. There is a constant message that data determines their success or failure. It is therefore no surprise that some schools and academies, and some academy trusts, might be engaging in non-inclusive practices and I am pleased that the issue is being highlighted. It continues to amaze and sadden me that sometimes it’s the children who need the most help who are regularly failed by our education system.