It's the end of the school year and children are arriving home up and down the land with their school reports in those scary sealed envelopes.

But how have England's local authorities and the Department for Education done this year? SEND parent, Karen Askham, has drawn up her own report and included comments based on what she's seen with her own consultancy, SEND Karma. 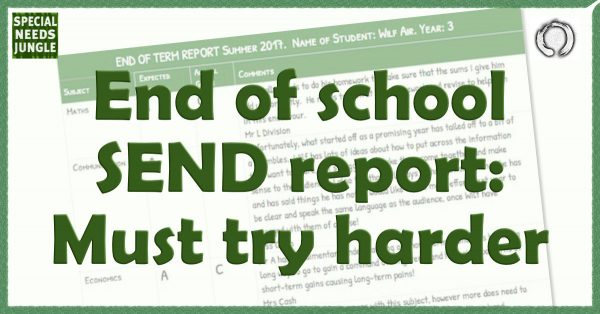 So how has 2016-17 gone for you?  After establishing SEND Karma in January 2016 as an independent advocate, I have seen:

Now, of course there could be other, additional reasons for these increases than just the state of SEND - for example, the need for more truly independent support and advocacy, the cuts to existing services such as Citizens Advice Bureaux and local Disability Rights organisations in a time of increased demand, a lack of budgets for training, or parents may have also become more aware through word of mouth, social media and websites about what their and their children’s rights and entitlements are and are now more prepared to seek redress.

Some of the common themes I have picked up on through feedback from parents I speak to around the Yorkshire region are:

So, let’s hope that next term promises improvement, meantime I encourage parents to find out what is out there locally, speak to other parents, find support and look after yourself! Together, we will make services listen.

Now, take a look at the report and let us know if you agree in the blog comments or add your own report!

Karen: Why do you think there is a need for your service – private IS? You carry out work in Barnsley, my home town, does your existence mean that the IS in our town is failing some of our parents? I would love to know your thoughts? and for future reference how much do you charge? Hourly rates? Daily rates?