To break into our two parter about "The Story So Far in the SEN Reforms", the Department for Education yesterday published two reports by SQW, the organisation that is evaluating how the changes are proceeding and developing inside those local authorities that are testing the reforms - known as pathfinders. One covered Key Working and workforce Development and we will be covering this again soon because we have spoken recently plans for independent supporters and a lot about culture change.

But this report is about how the path to applying for an EHCP is developing inside five of the 'pathfinder' or trial local authorities.  This means the route parents will take through the new system to secure statutory SEN help, replacing the statement.

A child who successfully navigates through this will end up with a single, coordinated (allegedly) Education, Health and Care Plan (EHCP). The SQW report was only looking at those who will be coming into the SEN system for the first time, not those children moving from an existing statement.

The headlines are SQW's, the italics are mine that raise questions to be answered.

BUT: The word 'Disability' has recently been included in the Bill, after intense lobbying by voluntary groups. So, the question is, if it had been included from the beginning, would that have changed the local authorities' approach? and if so, how?

BUT: This of course DOESN'T include you if you're headed for higher education. Yes, yes, I know you can access the Disabled Student's Allowance. But unless I missed something, the DSA is NOT statutory so if it all goes pear-shaped, you'd better hope you're going to a university where they actually care enough to make sure you and your needs are being monitored.

a) the amount of information that is gathered at the referral stage; the extent of choice a family has over who will be their EHC plan co-ordinator; (read independent supporter, something else recently announced that may have superseded the report's findings).

b) whether the EHC plan is written by a "multi-disciplinary" team made up of professionals relevant to that particular child or drafted by the co-ordinator/independent supporter based on the assessment.

BUT: how keen will a local authority be to allow an independent person to draft a plan that it therefore has less control over?

c) how plans are signed-off and approved; and the step down process used for children and young people that were not felt to require an EHC plan, which in some cases meant using the EHC planning template on a non-statutory basis as a means of extending the new way of working to all families.

BUT: Who decides what the financial cut-off point is for the amount of support when someone doesn't have a statutory plan but are accessing the same services from the "Local Offer" on the same template? Will services be "banded" with some only accessible to those with a statutory document?

[Phew! DfE wipes collective sweaty brow] Of course the real test of this will be when the changes are scaled up. Will the local authorities have the resources and the staff, re-trained and fully conversant with co-production, to cope?

Yes, and that's only the tip of the iceberg!

BUT: The vision is sound and a fine ideal that we all welcome. The problem remains that the government is trying to funnel a MASSIVE amount of change in thinking, processes, procedures and legal changes through a small timeframe.

The rush is, of course, entirely political to fit inside the legislative window before the next election looms. This is understandable on one level, but when seen in the context of putting politics before people, it makes you *wonder* whose best interests the government really has at heart.

As they are finding with the pathfinder learning, there are so many implications emerging from the changes that need to be carefully and thoroughly thought through. And that's before they even get around to thinking about the changes to the appeals process if/when some ungrateful parent decides they still haven't got what they need for their child and decided to appeal.

Of course with true co-production and the offer of mediation this should be less likely to happen, but those parents are a tricky breed. Heck, some of them just go and get a lawyer because they have so much money they can't think what else to do with it. [Note: This is sarcasm.]

And the pathfinders themselves are trialling with one of their eyes covered because the Bill isn't finalised and neither is the new SEN Code of Practice so while they may be able to get the big picture, the small details are subject to sudden change.

The image here is how the new process will look. Click on it for the larger image you can actually read. It was prepared by SQW. Don't forget, this is not set in stone, it is still developing but shouldn't be too different from this from the looks of it. 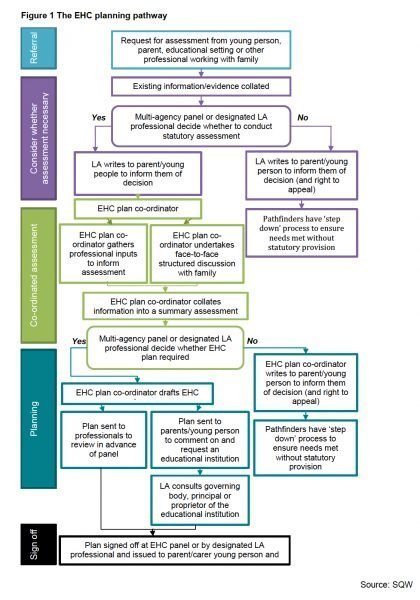 The good news is that Ed Timpson, the Minister does seem to be listening although he has a big ol' pair of ear mufflers on so you have to shout REALLY REALLY LOUD. Luckily, there are lots of people doing that.

The bad news is that time is running out as the Bill steams its way through the venerable Lords report stage. The question that has been there since the very beginning is why would they want to spend so much money and effort changing something without making completely sure that it is as good as good can be?

Wouldn't it be wonderful if the government actually co-produced the entire Part 3 of the bill with the people it's affecting - parents?

Now there's a thought. What do you think of the pathway?