Rare Disease Day is almost upon us and we have the third of our parent posts today about their lives with their child who has a very rare condition. We hope that in sharing their stories, you may find comfort if you are in a similar position or you can share it with someone you know who is.

Sarah's son was diagnosed with a SYNGAP1 genetic condition and discovered that have only been a few hundred others in the world, with just 30 living patients in the last year recorded. Today, she tells their story on SNJ. 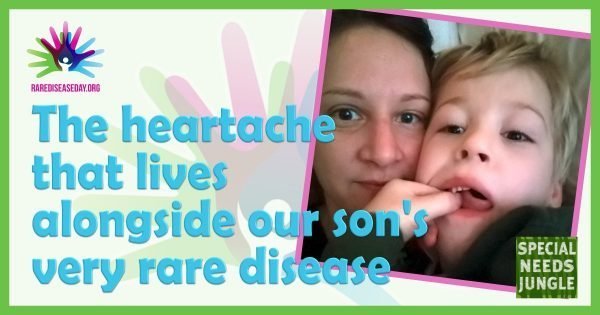 Shopping for syndromes by Sarah Morris

Sonny slept like a beautiful angel for the first five weeks of his life. I luxuriated in my perfect little family. My sweetheart husband, our toddler Willum was a delight, and now he had a little brother whom I promised would play with him when he grew up a bit. It was a precious few weeks.

Little did I know that as Sonny slept seemingly peacefully, under his golden hair immeasurable and irreversible brain damage was occurring.  I guess I am glad I did not know this at the time. And then, after five weeks, he woke up and a dark cloud descended upon our peaceful house as Sonny's restlessness, sleeplessness and screaming took centre stage. I thought we had a feisty fussy little boy on our hands and in our "attachment style" of parenting continued to rock him, breastfeed him, try to settle him, sleep with him, carry him about in a sling, convinced that it would fix him.  He certainly didn't appear ill or not growing.  He was beautiful and looked perfect!

At around four months of age I noticed that Sonny did not reach and grasp for things as expected and stared into space sometimes. That is, between the crying.  People would ask to hold him as he was so cute, but inevitably a few minutes later he would be passed back with a comment such as, "he's not happy, is he hungry/tired/ill? He’s so wriggly," and the "I don't know how you do it" comments during the endless crying, trying to settle and cuddle my raging child who was a stiff as a board, arched in the shape of a banana.

I can only describe the dawning of knowing that there is something terribly amiss with your perfect baby child, as a dark and chilling shadow which whispers into your ear. Your heart doesn't want to believe it but your gut knows the truth. You wrestle with this until you can deny it no longer and it has to be spoken out loud to loved ones. And then the "professionals" arrive.

The next few years are now a sleep-deprived stress-induced blur. We call them the dark days now. The noticing and reporting of Sonny's lack of development, the stressful and impossible crying and the appointments, assessments, poking and prodding, traumatic drawing of blood and medical tests. We knew there was something different, very different, about Sonny, but what? Test after test for terrible devastating conditions came back negative yet Sonny continued to miss every milestone.

I'm not sure if I simply had not grasped the magnitude of the situation or if I was holding onto the hope that somehow things would get easier, we would get some answers and go from there, but for a long time I did not cry. Then one day, after a much anticipated paediatric appointment, I was looked in the eye and told straight: "He will not catch up"

No diagnosis for Sonny's disability

I remember staring back, glaring in fact, hyper-aware of the clock ticking and that I wasn't responding.  It hit me like a train.  Sonny was severely disabled and he couldn't even tell us why. The gap between him and his peers was becoming a chasm.

I had suspected Sonny had epilepsy for a long time. When he developed atonic drop seizures at three years of age my fears were taken more seriously than before, and he was diagnosed following a second EEG test. This news utterly destroyed us; things were getting worse, not better! However, we were able to commence anti-epileptic drugs which thankfully and luckily worked gradually with the first drug we tried.  Sonny’s overall development and distressed screaming improved a little. I now believe he was in fact having seizures from a very young age and my concerns early on were correct.

Since tests started with Sonny, I have spent many, many hours researching on the internet. I have exhausted myself emotionally and physically and driven myself bonkers doing what I now amuse myself by calling "shopping for syndromes". This involved researching every possible known syndromes and seeing if they matched Sonny's symptoms...so many did, but not quite, and I would pester the paediatrician to test for them. I also asked to be put on the DDD study, as it seemed most likely to me that Sonny's differences were a rare genetic difference.

I also spent ridiculous amounts of time researching various therapies and interventions, hassling the relevant person and making charity applications to make things happen. I learned very quickly that if you don't fight very hard for what your child needs, you don't get it given!

Exhaustion has been a feature of our unexpected journey. The endless medical appointments, telephone calls, school meetings, assessments, funding applications, benefit applications (and appeals and tribunals!), on top of the daily needs of looking after a severely impaired child, severe and prolonged sleep deprivation, plus the self-appointed position of chief researcher can add up to an emotionally and physically draining existence. Plus, the worrying!  Knowing that if you don't drive this thing like a tank through no man’s land that nobody else will is a heavy load to carry.

Heartache is a constant companion

Heartache has been a feature of our lives. It's unavoidable. The heartache of watching your child struggle with every single aspect of existing and functioning. The heartache and loss of being able to function as a family doing fun things and learning about the world together.

The heartache of loving my older boy so much and not being able to spend any time with him. Watching him play alone, endlessly, patiently and sadly waiting for me to sort out whatever was bothering Sonny at the time.  The guilt of going to watch his Nativity play and sobbing silently throughout, not being able to peel my eyes away from the row of children Sonny's age singing a perfectly rehearsed song with accompanied Makaton signs.

Sonny remains nonverbal, with a severe intellectual disability. This means that all the snippets of information which a typical child processes every moment, the constant interaction with the environment and social interactions that go on to build cognitive skills are scrambled for Sonny, so skills are learned very slowly, in haphazard way, and are often forgotten.

"Diagnosis doesn't matter" This I heard a lot, and I disagreed with it. Through my research, I knew that huge gains had been made in neuroscience in recent years, and that the technology of whole gene exome could potentially reveal hundreds of "new" syndromes or conditions. I also knew that a lot of research is being done in the area of genes associated with autism. 10 years ago a diagnosis would not have been possible but as things stood, I thought maybe we could get a diagnosis for Sonny.

DDD throws up a result!

As Sonny turned 6 I began to give up hope. The DDD results were imminent and I had convinced myself they wouldn't have found anything, perhaps protecting myself by deciding that if there was no result, that I would give up searching and accept not knowing. I felt sick at the thought of discovering that his condition was even worse than it appeared somehow. But DDD did in fact find a cause of Sonny's disabilities. SYNGAP1. Syn...what? Gap...what?!

I did what anybody would do, given that I then had to wait 6 weeks for further information from genetics. I consulted my trusty friend and tool Dr Google of course! I was astonished to find there were OTHERS, and that some knowledge was available and research had already begun. When I saw a photograph and read a mum's description of her daughter, I literally could not breathe for a few minutes. Finally, finally, we had the answer and we were no longer alone.

There was an end to the chapter of "not knowing" which brought about some sadness too, but overwhelmingly the end of the dangling on a string and wondering feeling being over is a great relief. And now, a new chapter, of learning all there is to know about Syngap and the other children.  Having access to knowledge and experience of others has been helpful for us to move in a more refined direction.

And Sonny, well he's just Sonny!  He has the ability to drive you from tears of exhausted frustration to making your heart sing with love and admiration for his ability to experience bliss and joy from things that most people take for granted much of the time. The feeling of water sprinkled or flowing, watching it ripple, the reflections and shadows. Mud in a puddle. He has taught us to notice these simple beautiful things and to truly be in the moment.

Sonny can walk but he's wobbly and falls over a lot. He was recently further diagnosed with oral dyspraxia and an unrelated to Syngap (we think), hearing impairment.  He tries really hard to talk and we are hopeful that he will learn to say some words reliably. His behaviour is like a toddler, and this has been the most challenging aspect of Syngap for him and us. His epilepsy is thankfully and luckily controlled at the moment, although we carefully watch for changes.
He can get overwhelmed easily and requires a lot of sensory input.  He loves his food and animals.  He goes to a special school and really enjoys the sensory-rich environment and the activities they do. He has a respite worker which he adores and we enjoy the time doing stuff which Sonny doesn't like!
"Diagnosis doesn't matter" It does!

As I sat and wrote this story a new post has popped up on the Syngap Facebook group.  The latest research and findings into Syngap.  These snippets of information are like gold dust to a desperate parent flailing around in the dark for six years!

If a drug could be developed and safely given to our children to target the lacking protein SYNGAP and allow more efficient learning whilst their brains are developing, then miracles really could happen!  We live in hope for this.