It's bad enough when your child has a severe illness, but when you discover it's a condition few have heard of, the journey to getting them the right treatment gets many times more difficult.

Every year we mark Rare Disease Day at the end of February with some stories from parents about their experiences finding help for their child's rare condition. There are more than 7,000 different rare diseases, many that have just a few thousand patients around the world and some, ultra-rare diseases, even fewer.

Along with the diagnostic difficulties, rare diseases brings challenges in locating specialists who can help and in sourcing therapies. When the massive costs of drug development cannot be recompensed by the small number of patients affected, pharma companies are less willing to invest in the research in the first place, although this is beginning to change.

Projects like 100,000 Genomes and other genetic advances mean great strides are being made in finding names for conditions caused by chromosomal anomalies. It's these developments that helped mum, Charlotte, get a diagnosis for her 10 year old Shawn. He has a genetic condition known as Chromosome 10q22.3-23.2 Micro-Duplication and there are only 10,000 cases in the world. Today, Charlotte tells her story on SNJ. 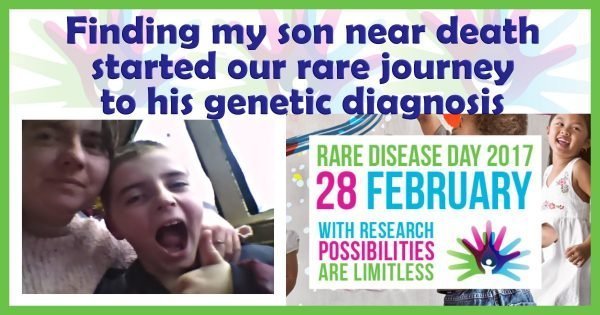 I could tell from the moment my son was born that he was going to be special. My boy was born a healthy 71b 15 oz and ten days overdue. He was born in his waters, but it was an otherwise normal delivery. The midwife delivering my child told me that it was a 1 in a million chance of being born in your waters and that he would be very lucky and very special.

I never thought or even wondered how true those words would be until 9th December 2007. My son was only 11 months but I can never forget the morning I found his lifeless body, he was a mottled grey. I was hysterical; I could barely breathe. I have never been so scared, so worried in my life. He was resuscitated in the ambulance several times and later put into an in induced coma.

I was told to prepare for the worst and how the next 24hrs were critical. I felt my whole world shattering apart. Five days later, he woke up and it was the most wonderful, heartwarming moment I have ever experienced. Doctors could not find out what had caused his acute collapse, despite extensive testing.

He had a repeat MRI in November 2008 that showed up atrophy in the cerebellum of his brain. This felt like the breakthrough, but this was only secondary as it had occurred later. Over the years, we had extensive support and appointments from various places, from charities to occupational therapy to physio. My son made slow progress, but progress but progress is progress. It wasn't until September 2015 that I found out about new developments in genetics and realised that maybe he could be tested genetically again.

This particular test picks up micro-duplications and deletions on chromosomes and it came back that in December that my son had the rare chromosome 10q22.3-23.2 micro-duplication and that it causes intellectual disability as well as physical signs. Later, in 2016, he was linked to autism and has been diagnosed learning disabled.

I have had to fight and I am so grateful to all the advances in genetics, otherwise I would have still had nightmares and flashbacks from that fateful morning when I found him lifeless. At least we can move forward with an action plan for the future and get the right support in place. The charity, Unique, have been an excellent source of information,while Derby charity, Umbrella, have provided excellent support for us as a family and have given us respite care for him. Life has been tough but having a diagnosis means I can move forward now.