Today's parent story is a classic case of a local authority's disregard of the SEND reforms: poor communication and lack of cooperative working across services, resulting in a failure to comply with the law. But what can a parent do when an LA has failed in its legal responsibilities?

Most local authorities get away with delays, bad behaviour and illegal practice because the parent is either too exhausted to follow it up or doesn't know the law or their right to redress in the first place.

One parent wasn't about to take her local authority's unacceptable delay in conducting an assessment for an Education, Health and Care Plan go without challenge. The parent, who would prefer to remain anonymous, has written for SNJ in the hope that more parents will be equipped with the knowledge to hold their own LAs to account for their shortcomings. 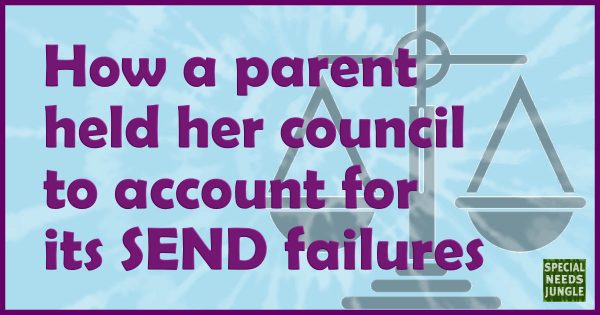 My letter of complaint got results

Like every other parent of a child with special educational needs, I have been forced to change from someone who once never used to bother complaining, to a person who cannot and will not put up with being ignored and bullied. A local authority (LA) officer once accused me of “always complaining” only to admit soon afterwards that actually I was right.

My LA, Hampshire, was a pathfinder (pilot) for the current legislation, which was promised to represent a new dawn for children with SEN. However, they don’t seem to have got the memo. They took 38 weeks (instead of 14- this limit has now been changed to 20 weeks) to complete an Education, Health and Care plan needs assessment for my child. They blamed the delay on “Health” not supplying reports when asked, despite the fact that they hadn’t made it clear what reports were needed.

I made a formal complaint, and the LA apologised, but did not admit any responsibility and the delay continued. I contacted Eleanor Wright, solicitor and Co-ordinator of SOS!SEN, a charity which offers help for families of children with SEN.  Eleanor assisted with a pre-action letter threatening judicial review proceedings to enforce my child’s rights. This finally spurred the LA into (some) action including obtaining speech and language therapy (SaLT) advice from an expert I nominated, and they finalised the plan at last.

Our troubles were not at an end, as this did not result in them actually supplying the majority of the support set out in section F of the plan.  It turned out that the NHS SALT service didn’t approve of my expert’s recommendations and therefore would not comply with them despite the fact that they had been incorporated into the plan. Occupational Therapy and clinical psychology services were not forthcoming either. Again, the County Council's response was simply to keep asking Health and to tell me it wasn’t their fault. So back I went to SOS!SEN for another Judicial Review letter, which finally resulted in the LA agreeing to commission the necessary support from the private sector and remedy their other failures.

Whilst this sorted matters out for the future, my child had been deprived of vitally needed SEN support for several months and I decided to pursue my complaint.

I am no stranger to the Local Government Ombudsman (LGO), having unfortunately had to escalate complaints to them on several occasions. I made a two-part complaint:

The local authority response to both was essentially that delay was due to failures by Health and they couldn’t do anything about that.

The LGO pointed to Regulation 8 of the SEND Regulations 2014, which requires outside bodies to provide information requested by LAs within six weeks and the LA to finalise an EHCP within 20 weeks.  He stated:

In my view, this overarching responsibility means that when a body … exceeds the six week time frame, and there is doubt that the body will send the information in the immediate future, the SEN department should commission its own assessment from a private provider and seek to recoup the cost from the CCG.

Therefore, as Health had failed to comply with two deadlines at the beginning and end of December, the LA should have commissioned advice from private providers at the beginning of January to prevent further delay.

2. Failure to make provision in Part F of the EHC Plan

The LGO referred to paragraph 9.76 of the Code:

He said that, if there is significant delay or obstruction in sourcing this through the local health Clinical Commissioning Group (CCG) commissioning from the NHS, then:

the Council will have no alternative but to commission from the private sector to ensure provisions specified in section F are in place.  It may then ask the CCG to recoup its costs.

The LGO calculated the entire period of delay as around nine months, and ordered that the LA:

This decision will be shared with Ofsted: Hampshire has yet to undergo an Ofsted inspection.

The full decision has now been published on the LGO website and you can find it here. I hope parents will find it useful to cite this to LAs, since the excuses produced by HCC in my case are, I understand from SOS!SEN, only too common. I would suggest that as soon as there is any possibility of delay in obtaining reports or services from other services, parents point out this decision to their LA and ask them to commission services privately without delay.  And tell them that, if they refuse to do so, you will be following me to the LGO.