We get lots of new followers on Twitter every week, which is obviously pretty fab. And I'm guessing that they would all like us to follow them back. But we don't follow everyone back and for lots of different reasons.

So I thought that for every reader on Twitter, new or old and everyone thinking of joining, I would offer a few tips for how to tweet and how to build your network.

Did you follow us and we didn't reciprocate and you wonder why?
These are the reasons: 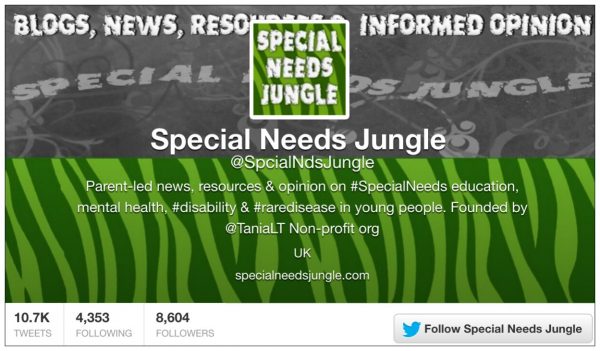 2. You have no profile description. Why would I follow you back if I have no idea who you are? Or if you are SEND related? Hint: if you start your profile description with "I love my... kid/ husband/ dog/ hamster we are not likely to follow you back. You are SUPPOSED to love those people/pets, it's not a claim to fame. Tell me why you're on Twitter and why I should follow you. Then I might.

3. You haven't actually tweeted. I'm only going to follow you if you have something interesting to say. When you join, the fourth thing you should do, (1 & 2 then following some people in your area of interest)  is tweet. Or retweet some of the finer tweets of the people you are following. Especially us. Flattery will get you a follow back.

4. Your tweets are boring, rude, incomprehensible or irrelevant to us. 'Nuff said. We only follow people via SNJ who are in our sphere of SEN, disability, education, child mental and physical health, rare diseases, social enterprise, parenting. And, of course, pass the 1 to 4 test. And you don't protect your tweets. I hate that and if I spot it I won't follow back; I'm on a public forum, not joining your private club.

5. If you have 22,000 followers and we've never heard of you, the chances are you bought them or used a mass follow-unfollow technique. And you're selling something. This is usually confirmed two days later when you unfollow us because we didn't follow you back within 24 hours.

Just like you, we are busy parents, so I only check new followers once a week or so. Those we follow back we try to remember to add to a Twitter list so we can keep track of what they're saying.

However we'll only really get to know you if you RT us or chat to us. We talk back, 'cos, like, that's what Twitter is all about- a global conversation.

And yes, that is a dig at every 'big name', brand or organisation - many of them non-profits and charities on Twitter who think they're too grand to answer anyone who tweets them. Actually it's quite probable they're not actually looking, just automating a bulk tweet feed and rarely checking who's following them or what they're saying.

Don't sell to us or try just to promote your own stuff. We do like you to let us know about your new posts if you're a blogger but only the really good ones, and ask, don't just tag us on your tweet about your post- that's just rude.

We're in it for the conversation as well as to provide information. But if you tweet us and we don't answer, we just missed it and we'll spot it by the by.

Who tweets for SNJ?

It's a mix - but you can tell usually that if the link is from buff.ly (The Buffer sharing tool) it's Angela, if it's ow.ly (Hootsuite sharing tool) or a direct link, it's me. It's also me doing the replies to messages and @replies and general banging on. Sometimes I'm a bit quiet on the replies, when I'm otherwise busy or knackered. But I'll catch up later. If it's important, message me. I also have my personal Twitter, see below, so follow me there too. I talk more rare disease stuff, lifestyle and general chat.

Chances are, if we find it interesting, so will you. We're all parents of kids with SEND and so are you (or someone working with SEND children) so we're interested in the same things.

We like to tell you about great stories and we also like to tell you about our own great stories. But we don't just want to talk about ourselves, how boring is that? And if you're a charity or business and that's all you do, just stop it, right now. 20%-30% your links, 50%-60% other stories and the rest should be just chatting to other people - and this will be more on some days than others.

I subscribe to lots of newsletters and have other online tools to gather the news for me, so I can stay up to date. I still miss stuff, so do tweet me if something interesting is happening! Ange uses similar tools and has a knack for knowing the stories you'll like best.

As I said, I do teach social media and blogging to non-profits, charities and small business, so if your organisation needs some training, let me know.

How do you get more followers?

It's really not that hard if you follow steps 1-4 above. However, one of the biggest reasons people don't build a following is they don't follow other people. If you're worried about a cluttered timeline, make lists so you can see the people you don't want to miss. Unfollowing someone because not every one of their tweets is something you're interested in, is just a rookie mistake. But, unless you're a major personality, you're gonna have to follow some people so they find out who you are, what you've got to say and maybe they'll follow you back.

It's good to talk, so we look forward to chatting.. But remember 1 to 4 first...

P.S Did we still not follow you back? Let us know. Leave your Twitter handle in the comments on this blog post... But we will check your profile first so make sure you're 1 2 3 4 ready.

PPS. If you unfollow us and we're following you we will know and reciprocate. Because that's also just rude and we hate bad manners.

Founder of Special Needs Jungle. Parent of two young adults with autism. New grandma. Tania is a member the Ofsted SEND Inspections Stakeholders Advisory Group, and sits on the Advisory Board of the Royal Holloway, University of London Centre of Gene and Cell Therapy. She is also on the Editorial Board of Springer Nature Gene Therapy journal She is also an experienced broadcast and print journalist & author. Tania also runs a PR, web & social media consultancy, SocialOro Media. She is a rare disease & chronic pain patient advocate with Ehlers Danlos syndrome.
View all posts by Tania Tirraoro →