I bet many, many parents of children on the autism spectrum can relate to the hideousness of having your child meltdown in the middle of a large store or shopping centre. Not because they wanted something they couldn't have but because the sounds, lighting, business and even smells just got too much. I recall one particular event at IKEA with my eldest, aged three. We ended up strapping him into his baby brother's pushchair and pushing him as fast as possible, kicking and screaming through the rest of the store to the exit, ignoring the looks of other shoppers.

The National Autistic Society’s about to stage an event as part of their "Too Much Information' campaign that will come as a breath of relief to parents up and down the land. On Monday 2nd October at 10am, every retailer, restaurant and leisure operator at into's 14 shopping centres nationwide (including the Trafford Centre in Manchester and Lakeside in Essex) will reduce their lights, music and other background noise for one hour. The Autism Hour is the first event of its kind.

For a week, this event will provide autistic people with a break from an overload of ‘too much information’.

As someone who is left in a daze even after going round a supermarket, I hope this is the first of many - who actually likes over-bright lights and someone else's choice in music as they shop anyway?

While it's not always the fault of bright lights, a survey by The National Autistic Society suggests that 64% of autistic people avoid going to the shops, and 28% have been asked to leave a public place for reasons associated with their autism. The charity is asking shops and services to take simple steps for one hour to help create a more autism friendly world - from dimming the lights and turning down music to sharing information about autism with employees.

Shops and services everywhere in the country will be encouraged to follow their lead by taking 60 minutes during the week to follow suit. According to a 2015 National Autistic Society survey of over 7,000 autistic people, their family members and friends, and professionals:

One mum, Nicola Davies, also knows how detrimental the sensory onslaught of shops can be. She's written for us about what it means for her family. Find out at the end how to find the shops joining in and how you, as a business can take part. 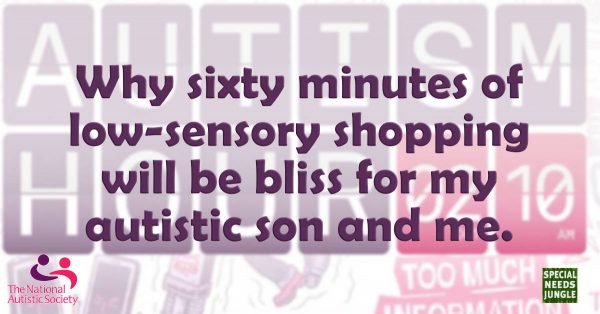 Why sixty minutes of low-sensory shopping will be bliss for my autistic son and me.

11 years ago we were blessed to start out our parent journey as we welcomed our first born, 8 weeks early, so a little impatient!
Along the way we have welcomed a beautiful daughter and another son, all of whom were also impatient to enter the world but are wonderful children all with their own individual personalities.
Our eldest son is autistic and up until the age of three was non-verbal. Even after he started to communicate, it was still so hard to understand unless you knew him well and he struggled with language delay. It was very difficult to watch as, unless I was translating for him, my son would often be met with blank expressions from his friends and family and you could see frustrated he would become.

As my son grew older his behaviour became more challenging and his sensory issues became more acute. At school, he stood out because he didn’t pick up on social queues such as lining up with his classmates, he would only eat white or green food that needed to be separated and he wore a beanie hat at all times. He would scream or make uncontrolled loud noises, would have meltdowns anywhere at any time, he wouldn't sleep and when he did it was with us.

Taking him out, unless it was to open spaces could result with a swift turnaround to find the nearest exit! People would tut at us, give us the 'pitty' look, worse they would accuse us of not controlling our son or they would start telling us how to deal with him by telling us what we need to do or what he needed to eat. I got punched, kicked, bitten so many times as a result of his frustrations, sometimes this would result in me getting the children into the car and driving to my parents’ house a short drive away and taking five minutes to gather myself together before painting a smile on my face and off we would go again!
Gradually, through the years, we got to know what could trigger him, so we would avoid adding any stress, we would avoid introducing him to new foods and textures when not in our own home and avoid social spaces such as busy shops. As our son got older we would try to encourage small changes in a controlled environment by introducing him to new foods, textures and routine shopping experiences. He was always funny about clothes and shoes, not liking seams or rough textures, wanting to wear crocs or wellies, as a young boy he would remove his clothes as soon and as quickly as he possibly could once home.
We have faced so many challenges over the last 11 years, some we have conquered others we are still trying to work on, but what we have learnt is to look outside the box and pick your fights and your moments.

Recently I faced a challenge that I never thought I would conquer... school shoes!
It was a beautiful day and our son was in a really good mood, breakfast had gone well, he had chosen some clothes that felt fine. So  when I suggested after lunch, walking five minutes to our local Clarks shop to get his sister's school shoes fitted, he said okay. Within five minutes the buggy was packed, our youngest strapped in and we were at the top of the driveway walking into town.

As we walked into the shop the sales assistant, who knows our family well and has experienced our son's meltdowns in the store on previous occasions, could see the dread on my face. However, she came over and explained that Clarks has recently launched a shoe range that are much more autism-friendly that he could try. The shoes have been approved by schools, are light weight, practically seam free and Velcro fastening. I am sure many parents of autistic children reading this will understand quite how ground-breaking this is!

After some persuasion, my son tried the shoes on and not only did he keep them on, he started to run and jump around the store. His face lit up and a smile went from one ear to the other. Before I knew it, I was sobbing, my daughter was sobbing and so was the shop assistant! As the mother of an autistic son, having a positive experience in a shop is something that just doesn’t happen. Shops are busy, bright and noisy places and my son just gets overloaded with too much information all at once.

On October 2nd, The National Autistic Society are launching Autism Hour which will be the UK’s first week-long event where businesses and shops will take simple steps for 60 minutes that make their venue more autism friendly. The charity has listened to how difficult it is for us on a daily basis to attend shops with an autistic child or adult and they are working to educate the general public as to what they can do to help alleviate the stress. Shops and businesses will be turning down music, dimming lights and ensuring employees have an understanding of autism so they can provide the right customer experience.

I can’t explain how life changing it would be if taking my son to the shops became as easy as it was in Clarks that day.

You can find out what local stores will be holding an Autism Hour on the National Autistic Society’s website: http://www.autism.org.uk/get-involved/tmi/autism-hour.aspx

Taking part as a family or a business

You can find out here which shops near you have signed up. If you're a business, click here to join the Autism Hour.

As a business, find out below what's involved.