We really want to be able to bring you stories of great experiences of the SEND system by families. Sadly, we don't often get sent them and today's parent story is no different.

Harminder and her husband have an 11 year old son, Kyle, who has specific learning difficulties (SpLD) but no behavioural issues. You would think it shouldn't be too hard to support a child like Kyle, but that has not proved to be the case. What has happened instead, many of you will be familiar with; a struggle to get the right kind of help that has led to a hugely stressful experience for the whole family.

Harminder takes up the story... 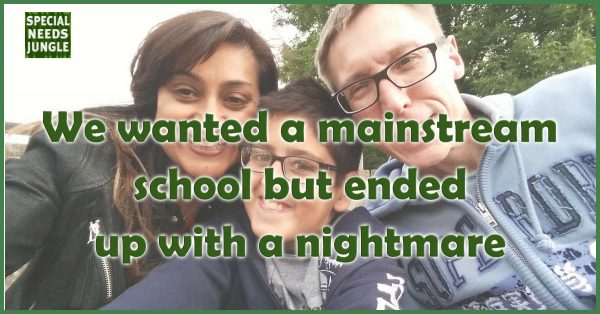 We just wanted a mainstream school for our son, Kyle

I'm Harminder and we live in the Buckinghamshire and have an 11 year old son. Kyle's educational journey has been very difficult for him. He struggled through primary school and was always different from everyone else. No one quite understood him  or how to support him. We pushed the school for a statement and he was diagnosed with specific learning needs. He was six then and it has taken us five years to really get a correct diagnosis of his needs. It has been a very long and difficult road for us all.

Five years on still no school and no support at all.

Kyle moved to a junior school, where they failed to provide the provision as outlined in his Statement of Special Needs. He had some horrific experiences from this school, from not being given any lunch regularly, to being shouted at by his learning support assistant and made to cry. The level of care was poor and the Head had no intention of putting things right, but continued to make excuses.

Kyle was very unhappy and starting to develop high levels of anxiety, crying as he did not want to go to school. It was heartbreaking. When we had the annual review of his Statement we were presented with a room of 15 people! It was overwhelming. We were given no break for almost three hours and it all felt very threatening. We were new to this type of bullying. Five years on we have learned to expect it.

The Head and SENCo attempted to give him an incorrect diagnosis as an excuse, yet his educational psychology report was showing that he had regressed by three years in only two terms. They wanted him to be put into a special school. Kyle has dyspraxia and dyslexia; he has no behaviour issues. He learns differently but is very intelligent. At the time, the only way we could remove our son from this terrible system was to deregister him, which we did.
We asked the local authority straight away to find him a suitable mainstream school. That was four years ago and we are still fighting them for a suitable mainstream school place. He has had no help or provision put in place for his education by LA in that time. We have had to fight all the way and have learned a lot on the journey.

The complaints procedures that can go on for four years! They still continue to make excuses and pass you to the next professional body. We have so many letters of complaints. Governors who refuse to acknowledge complaints. The Department of Education, Ofsted, Local Government Ombudsman (LGO), our MP, the local authority, the Prime Minsiter. They do nothing. We have even been to Human Rights as an education is a basic human right, let alone the fact that the Statement of Special Needs is a legally binding document. Still no support.

The media all seem to be too frightened to show the truth of how special needs children are being failed. Parents are at breakdown point through the sheer fighting for an education for their children. I work with support groups and talk to parents who have suffered a heart attack and still have to continue this terrible system. We should be supporting parents and their children instead of destroying them.

Not only this, there is so much money wasted on tribunals! The waiting list for SEND Tribunals is May 2018! The LA have their flash lawyers while parents are told that it is a very parent-friendly system and that they do not need representation. But when in that hearing room, the LA have their barrister and as many witnesses that they can find to give false claims about your child. False LA Ed Psych reports!

We had an EP present who hadn't seen our son for over a year and her report was inaccurate, yet she was allowed to stay and to give her views! We had up-to-date specialist reports, yet they were not even looked at.  We had the date in the diary for some time. The LA tried to adjourn a number of times the day before the hearing and we refused. What a surprise, we receive a call to tell us that it is adjourned at the last minute due to lack of panel members? Coincidence?

The following week a date was given and we had two days to arrange childcare which involved a five hour journey to collect my mother from my brother’s house where she was visiting. The children were unable to attend their lessons with tutors. We were up at 6am to get to London. The LA presented us with over 100 pages of new evidence the night before (not to forget that I was driving to collect my mother for childcare). We objected, but the judge ignored us.

A special school was brought in at the last minute, which a judge had already said would not be allowed as the parents' wishes and suitability are for a mainstream school. LAs are throwing children who should be supported in mainstream into special schools as a way to hide their failings. Mainstream with additional resources are full (ARP) and include children with severe needs who also bring in more funding. So if you have specific needs where do your children go? So many children out of school here in our country.

Exhausted with a lost career

In the meantime, we have struggled through having to give up a career and job to home educate. We asked the LA to provide some support or even advice on how to educate him but no they refused. No funding.

Kyle has missed his entire junior school education due to the failings of our council. We are exhausted from having to fight all the way but we continue for our child and many others out there. This needs to change. Our SEND children deserve an education.

All my son ever wanted was to go to school and be like any other little boy. He has been denied this and the lack of care in schools have left him vulnerable and frightened to go to school. How does anyone replace those four years? The lost education due to no professional input – even with a statement and EHCP.

As a mum I want to take him away from this four year nightmare and give him a new start where people actually care. The negligence and duty of care from our county council has been shocking.