One of the questions you are likely to be asked if your child is assessed by a speech and language therapist is, “has their hearing been tested?”  The link between speech and hearing is an obvious one – if you can’t hear, then you are likely to have difficulty speaking clearly.  They may also have difficulty with understanding language and interacting with others.  Hearing can affect a range of other skills.

Often the answer that I get when asking about hearing is that it has been tested at the newborn hearing screen.  This screening test is fantastic.  Since 2006, all babies in the UK now have their hearing tested within the first few weeks of life.  This has led to many children with significant hearing loss being picked up much earlier and therefore being able to get intervention and support earlier, leading to better outcomes.  Fantastic!

However, not everyone is aware that just because your child has passed the newborn hearing screening, it doesn’t necessarily mean that there is not a hearing difficulty.  There are two types of hearing loss – conductive and sensori-neural.  A sensori-neural loss affects the inner ear (cochlear) or the hearing centre in the brain.  A conductive loss affects the outer or middle ear.  You can have one or the other or a combination of the two.

The hearing screening will pick up on most sensori-neural losses.  However, conductive losses can develop (most commonly through otitis media with effusion – commonly known as “glue ear”). 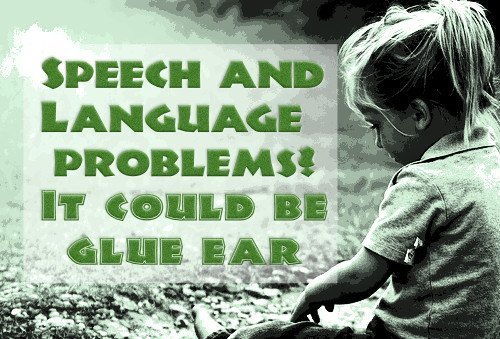 Glue ear is a very common problem in young children.  According to the NHS Choices website, it is estimated that one in five children around the age of two will be affected by glue ear at any given time, and about 8 in 10 will have had it at least once by the age of 10 years.  As you can see it is a widespread condition, though it does not cause any major problem for the majority of these children.

Glue ear is basically, a build-up of fluid in the middle ear.  The middle ear consists of three small bones which vibrate to carry sound waves.  Too much fluid means that they can’t vibrate as effectively and so this affects the quality of the hearing, and makes things sound muffled.  Glue ear can often coincide with colds and ear infections – it can fluctuate and therefore it can be difficult to spot that your child is having a problem.

For many children, they will have occasional episodes of glue ear and there is no noticeable impact at all.  You may never know that they had it.  However, for some children, it can have a significant impact on their speech and language development.  This is particularly true if it is severe and persistent or if it coincides with other difficulties.  It is also worth being aware that glue ear is more common in children with certain other additional needs, most notably Down’s syndrome and cleft palate.

For some children it is easy to spot that hearing has suddenly become difficult, or they have very red and obviously sore ears and complain of pain.  For others, there is no obvious infection and they make no comment about pain or difficulty hearing, so it can be difficult to spot.  Some of the things you might watch out for are not being able to hear you when they can’t see you, needing to go up really close to the TV, or not responding when you speak to them.  Now that one needs some qualification!  Most children appear not to hear if you’re asking them to tidy their room or get ready for school!  However, if they still appear not to hear you when you’re offering them a treat or something they really want, then it might be worth getting their hearing investigated.

If your child is struggling with speech and language, it is always worth getting their hearing checked by an audiologist, even if you are not concerned - just to be sure.  If possible, ask for the referrals to audiology and speech therapy to be made at the same time.  Most of the time, the hearing test comes back clear.  Sometimes however, it will show up a problem.

As I’ve already explained, glue ear is not a long-term problem for most children who have it, so the likelihood is that if the initial hearing test shows slightly dull hearing then nothing specific will be done initially – your child’s hearing will just be monitored for a while.  It may clear by itself, or your GP may prescribe antibiotics to help clear the infection.  However, if there is a significant ongoing problem, your child may have grommets.  These are little tubes which are inserted into the ear to drain the fluid away.  Sometimes the adenoids are removed at the same time.

I have known a few children whose speech has dramatically improved within hours of the operation.  However, that is unusual.  It is more likely to be a slow and steady improvement afterwards and your child may still need speech therapy.

If your child is suffering from ongoing glue ear or you are concerned about their hearing, here are a few ways you can help them while you are waiting or monitoring.