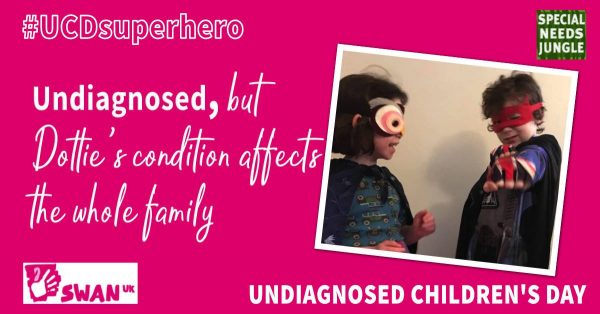 6,000 children are born in the UK each year with a syndrome without a name – a genetic condition so rare that is likely to remain undiagnosed. Having an undiagnosed genetic condition means that children often go to hospital for lots of medical procedures and tests. They miss out on doing fun things other children their age get to do. Their siblings often have caring responsibility and can also miss out on their childhoods.

This year we are celebrating our fifth annual nationwide awareness day, Undiagnosed Children’s Day. The aim of the day is to raise awareness of undiagnosed genetic conditions and to raise funds for SWAN UK, who helps these families. Undiagnosed children and their siblings have to cope with more than most on a regular basis. Their bravery makes them superheroes. There are lots of ways you can get involved and we’d love your support to make this year bigger and better than ever. You can find out more on our special website for the day, undiagnosedchildrensday.co.uk.

Marie Pritchard, mum to Henry and Dottie, has written about their life with Dottie's undiagnosed condition and how she worries about its impact - and not just on Dottie.

Dottie is undiagnosed but her condition affects the whole family

I want to talk about Henry. Henry is Dottie’s older brother.

He is a kind, caring and patient brother to his sister. Of course, they both have their moments and more recently have even started squabbling a little, but this is lovely to see as it’s what brothers and sisters should do.

Dottie was born at home around 7am on a Sunday as Henry (then only nineteen months himself) was waking up and they met briefly. We then spent a week in hospital under observation and when we returned home I could see that Henry had fallen in love with Dottie immediately. The first six months were magical. We were all very tired but very happy. This time, and everything before it, feels like our before time. Before family life changed and went in a different direction to what we were all expecting. 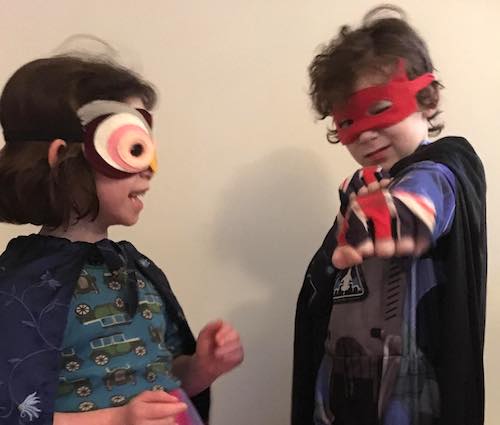 When Dottie was around one as well as being worried she was not hitting her milestones and being extremely small for her age, she also started having seizures. This is when our numerous hospital appointments, admissions, investigations and emergency 999 calls started. Henry had to come to a lot of the early appointments as he was still so young himself and not in school. He used to really enjoy the physiotherapy and speech and language appointments as the therapists found a way to involve him. I grew increasingly worried about taking him to medical appointments though as he got older and had a better understanding of what we were talking about.

We’ve always tried to explain to Henry at a level he will understand for his age. He knows Dottie isn’t developing typically for her age, we often say she is taking longer to learn things. He also knows we get very worried when she is poorly as this is when she is most likely to have a seizure. He has seen her have a seizure a few times but was very young and I’m not sure what he remembers. We will have to talk to him about it one day and explain what he can do to help his sister if she does have one. It’s become normal to him that Dottie has medicine twice a day, an injection at bedtime and we have to carry emergency medication with us wherever we go.

Just before her third birthday Dottie had a really bad seizure. She stopped breathing temporarily and her lips and face started turning blue. We had managed most of her seizures ourselves at home, but on seeing her turn blue I called 999. She started breathing by herself as the paramedics arrived at the door and we all got into the ambulance. We went straight into resuscitation where a swarm of doctors and medical staff came in. I just had to step back and watch and comfort Henry who was only four at the time. He was so brave and it was hours later when the two of us were able to go home (leaving my husband, Mike, with Dottie overnight) that he broke down, white as a sheet, retching and crying with the shock of it all. He wasn’t himself for a while after that and he still remembers the ambulance journey and Dottie spending time in hospital.

Dottie isn't our only child with needs

I do worry about the effect this is having on him. He is sensitive and sometimes slightly anxious and I can’t help thinking this could be why. Added to that the effect it has on Henry to have a mum and dad with additional stress, pressure, worry and exhaustion, I do sometimes worry more about him than Dottie. Dottie gets a lot of attention too, because of her disabilities and also because she is very engaging and cute – this too can be hard to manage.

We make sure that Henry gets plenty of one to one time with his dad and me and he is able to pursue his own interests and do things that are just for him. There have been many times where he has not been able to do what he would like because it was too difficult with his sister in tow. At home, he has not been able to be as boisterous as I think he would have liked as we have often asked him to play more quietly or calmly as this is what Dottie has needed.

When we see them play together though, my heart just melts, especially when they don’t know I’m watching. I love listening to him talk to her, read to her or help her get her shoes on. He talks about her in such a loving way, explaining to his friends that she can’t talk yet but she does use signs and he goes on to teach his friends some Makaton signs.

A health professional once told me that I needed to tell him everything before someone at school said something about Dottie and teased him about it. We feel the more gentle approach of telling him a bit more as he gets older or as it comes up or when Henry asks has worked best for us. His school has supported us in that and thankfully there hasn’t been any teasing, but he does stick up for her if she gets a toy snatched away by a bigger child.

Yes, being a sibling of a child with disabilities is hard at times but I believe the rewards far exceed that. At times Henry has been patient and understanding with Dottie far beyond his years and he has asked her speech and language therapist what the sign is for ‘annoying sister.’ He is also very lucky to have her as a sister as she brings so much fun, joy and laughter every single day. They are learning so much from each other and are both very lucky to have superhero siblings.

To read more of our family stories visit undiagnosedchildrensday.co.uk or watch our videos on YouTube. We’ve also got a fantastic online auction where all the proceeds go straight to SWAN UK.

SWAN UK (syndromes without a name), run by the charity Genetic Alliance UK, is the organiser of Undiagnosed Children’s Day, and the only dedicated support network in the UK for families of children and young adults with undiagnosed genetic conditions. SWAN UK runs free whole family events, gives access to 24/7 support and puts families in touch with each other so they feel less alone. If you have a child with a syndrome without a name, please get in touch. Email joinus@undiagnosed.org.ukor visit www.undiagnosed.org.uk.

Follow us
Miriam Ingram
Digital Communications and Support Officer at SWAN UK
My role with SWAN UK involves raising awareness of our work and undiagnosed genetic conditions and I work closely with families to communicate their experiences as well as acting as the first point of contact for enquiries. I also enjoy organising events for SWAN UK families and managing SWAN UK’s social media accounts.
I have a background in journalism, marketing and events and am passionate about giving people a voice and a platform to tell their stories.

Follow us
Latest posts by Miriam Ingram (see all)

My role with SWAN UK involves raising awareness of our work and undiagnosed genetic conditions and I work closely with families to communicate their experiences as well as acting as the first point of contact for enquiries. I also enjoy organising events for SWAN UK families and managing SWAN UK’s social media accounts. I have a background in journalism, marketing and events and am passionate about giving people a voice and a platform to tell their stories.
View all posts by Miriam Ingram →