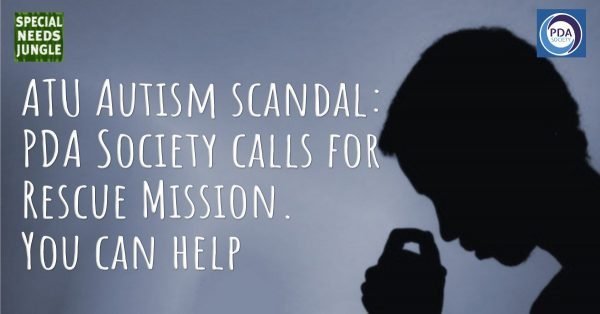 If you've been following the horrific stories of young people with autism who are locked away or who have died while "resident" in Assessment and Treatment Units or ATUs, you may well have heard about Bethany, the young woman with Pathological Demand Avoidance, an often misunderstood form of autism, whose father has been campaigning for her to be released and get much more appropriate treatment.
The PDA Society is a great source of information and help to families affected by Pathological Demand Avoidance. It's a particularly difficult condition to treat, as I know from my own family, and the expertise in the medical profession is still developing.
The PDA Society is also campaigning to change the way people with PDA are treated and cared for. Today, Vikki Threlfall, Trustee of the PDA Society, gives more detail about their plans and how you can act, now.

We need a Rescue Mission for our young people in ATUs

The many stories about autistic people held in ATUs - widely reported in recent days and weeks,  some of which I’ve summarised below - have shocked the nation. We are all now very aware of 'care' that turns out to be harmful and 'treatments' that look more like an abuse of human rights.

ATU stands for Assessment and Treatment Unit. These are hospital units designed for short term admissions for those with severe mental health problems, including those who have been sectioned. Many autistic people – children and adults – are placed in these units because their needs are not properly recognised, understood or supported in their communities. These units are totally unsuitable in most cases, and a vicious circle ensues where inappropriate and ineffective treatment leads to an increase in behaviour which challenges, which further seems to ‘justify’ the individual’s confinement. Worse still, parents are often kept in the dark about their young and adult children’s care plans and the conditions in which they are being held.

Sadly, none of this is new. It had been assumed that the Government's 'Transforming Care' initiative in 2015 had resolved the issues highlighted in the 'Winterbourne View' scandal. But many issues clearly remain.

It appears that there are a number of key problems:

The Government is trying to address some of these issues: joint commissioning (particularly around care for the elderly) is being trialled; last week the #AskListenDo campaign was launched, encouraging services to listen to those with autism or learning disabilities and their families; and, following Paula McGowan’s petition after her son Oliver’s death, the government has recently committed to mandatory autism training for all NHS staff.

However, the current cases make it clear that we cannot simply wait for these initiatives to evolve. Immediate action is required.

Why immediate action is needed

In several of the current high profile cases, unrecognised, misunderstood or poorly supported PDA (Pathological Demand Avoidance – a profile on the autism spectrum) has been identified as being a key part of the problem. So the PDA Society is calling for an urgent rescue mission for long term autistic ATU 'residents'. This would involve commissioners working with specialist experts, experienced in complex presentations of autism, to determine a way forward on a case-by-case basis, for example through Care and Treatment Reviews.

The PDA Society is assisting by contributing expertise and resources, sharing examples of best practice, delivering training on the PDA profile of autism and continuing to support and empower parents and individuals through our enquiry line service. We recently attended a meeting with the Secretary of State for Health and Social Care, Matt Hancock MP, to support an ATU PDA parent alongside Mencap (you can read more on that here).

I’d like to encourage anyone who has a family member in a similar situation or any professional with good practice to share to get in contact with us via info@pdasociety.org.uk. I’d also like to encourage everyone to sign a petition set up by autism campaigner Kevin Healey calling for an end to the detention of people with autism or learning difficulties in ATUs: https://petition.parliament.uk/petitions/231406

The ATU Stories where PDA has been identified as a factor

This is a short summary with links for further information. The PDA Society is working with others to establish the best way to collate all the current ATU stories in one place, so this is just a start.

Bethany's Dad, Jeremy, was first interviewed for BBC Radio 4's 'File on 4' programme, revealing how his daughter is held in a small cell with just a bed and a chair, with her food and all communication passing through a hatch. Many are following Bethany and her family's journey through hope and despair via her Dad's Twitter feed. Jeremy is working tirelessly to secure better care for Bethany and to raise the wider issue, including a visit to the BBC Breakfast sofa and an invitation to meet with the Secretary of State for Health and Social Care, Matt Hancock (who has also recently ordered an inquiry through the Care Quality Commission). Jeremy explained that a key part of the problem has been the lack of understanding of Bethany's PDA traits.

Lee, 43, is deteriorating rapidly in an unsuitable mental health unit miles away from her family home. Her Mum Gillian believes that all her placements have broken down because of lack of understanding of PDA and is desperate to get her home. She tells Lee's story on her petition page.

Chris, 25, achieved good GCSE exam results before being dispatched to a Learning Disability unit when he became anxious over a move. 9 years later he is still there, heavily sedated in cell-like seclusion without even toilet paper or handwash. His Mum Kerry tells his story on her petition page begging for him to be allowed home. Kerry feels that Chris has unrecognised PDA traits.

Sandra (name changed) was in a lovely care home with a team who understood her needs, but the local authority moved her to try and save money. The new placement didn't understand her needs (now understood as a PDA profile) and she ended up in hospital. After more than three years there, she is finally returning to the place she started.

Stephanie died in an ATU aged 25, four years ago. "Stephanie had a form of autism called Pathological Demand Avoidance (PDA) and the misfortune to live in a nation that imprisons people with learning disabilities, treating them in ways that should have been banished to the dark past," wrote Ian Birrell in his iNews article (linked above).

Read all our PDA posts here