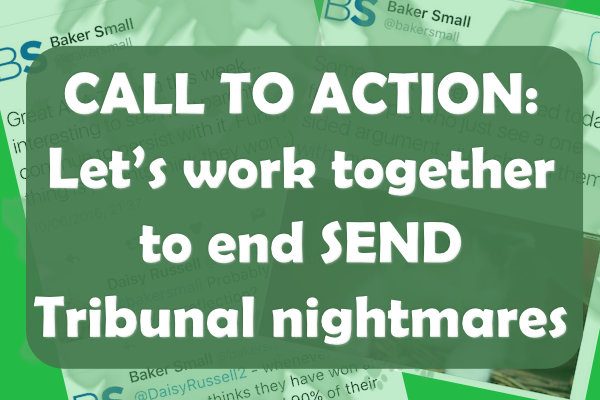 Moving the Baker Small Twitter-storm along... Special Needs Jungle would like to use the momentum we have gathered to create a groundswell of SEND community support to:

You've probably seen by now that BS earned well over £1.5 million from local authority contracts and that's just one legal firm. That's money that could be spent supporting our children, training staff, improving facilities and resources.

As you can see in our infographic from recent Tribunal figures, if local authorities are losing 84% of appeals, it suggests there is a serious flaw in their methods for identifying SEND and/or they are abusing the tribunal system as a way of deterring or delaying support.

We know what's wrong, but how can we make it right?

We’re calling on you all to contribute your views and support so we can create something together, that would work, both legally and in practice.

Renata, @AspiedeLaZouch and I have put our heads together and have agreed on a few ideas. But we want this to be a community movement, so we need your help, experience and expertise to create a solution.

Please contribute your ideas and thoughts in the comments on THIS POST (rather than on Facebook) as reading your ideas may give someone else another idea of their own to add. If you want to be anonymous, I’ve added a form at the end for you to fill in.

What we propose - a voluntary code of conduct

We are proposing introducing a VOLUNTARY CODE OF CONDUCT that local authorities could sign up for to show that they are fully committed to embracing one of the key aims of the Children and Families Act 2014: to reduce the adversarial nature of the SEND system.

We have the law on our side. The SEND Code of Practice already enshrines in law the requirement for Local Authorities to work in partnership with families to assess and provide for a child’s SEND, so we shouldn’t be seeing these cases ending up in Tribunal in the first place:

5.37 Where a setting identifies a child as having SEN they must work in partnership with parents to establish the support the child needs.

9.44 “…Throughout the statutory process for EHC needs assessment and EHC plan development, local authorities must work in partnership with the child and his or her parent or the young person. …”

9.168 Reviews must be undertaken in partnership with the child and their parent or the young person, and must take account of their views, wishes and feelings, including their right to request a Personal Budget.

10.30 (Re Home educated children) Local authorities should work in partnership with, and support, parents to ensure that the SEN of these children are met where the local authority already knows the children have SEN or the parents have drawn the children’s special needs to the authority’s attention.

What's the thinking behind this?

There is already a move for more case management by telephone with a Tribunal judge before a hearing and this, it’s hoped, will be extended. Right now, there is also pilot with a number of LAs and the Tribunal, testing using the SEND Tribunal for health and social care disputes in an  EHCP as well as education, instead of the different routes they have now. It will be interesting to see the results of this when the pilot is complete.

“If matters can be resolved without the need for a court process – so much the better. Solicitors acting for LAs can often help the resolution process by offering the LA robust legal advice. This can encourage an LA to concede or adjust/soften its position as the LA reviews matters with the benefit of a lawyer’s perspective about what is likely (or not) to find favour with the tribunal.”

Before you add your comments, here are a few things to consider:

What’s the difference between Mediation and Dispute Resolution?

The SEND Code of Practice explains from [11.13] that The Children and Families Act 2014 makes a distinction between disagreement resolution arrangements and mediation.

Why can’t we just ban lawyers from the Tribunal altogether?

Our last post caught the attention of Carrie Grant, who you will know as well as a top vocal coach is also the parent of children with additional needs. She's seen our draft and is lending her support to the campaign:

"When your children are diagnosed with Autism or SEN, your world is turned upside down, there is a lot to celebrate but you also have to make massive adjustments at home and school and begin to manage a whole host of emerging issues.

When a parent is wrung out from battling at home there can be nothing worse than having to fight on every front. Schools and Local Authorities should be mindful of the potential negative impact they can have. Surely we can learn to talk with one another without the presence of lawyers. No one has any idea what us parents face, you simply cannot imagine it unless you've faced it. When true child-centred collaboration happens it's magical and it's something we should all be striving for."

This is important because it cannot just be an SNJ thing. It needs to come from across the SEND community and beyond in the same way that we all rounded on the outrageous tweets from the BS law firm. Also on board so far are SNJ's Angela of course, and Steph Curtis of Steph's Two Girls. We need every SEND blogger to sign up, so please contact me or Renata via FB or Twitter (or below)

That should be seen as a catalyst - a watershed moment when we realise that complaining about injustice separately is nothing compared to our voices, in unison, calling for this wasteful, stressful, hurtful and horrifically expensive practice, to end.

This campaign, if it is to succeed, needs to be supported by parents of children with disabilities, SEND bloggers, legal advocates, charities, supporters, parent groups and anyone else who wants to see a fairer way forward for disabled children and their families. It's not about me or you, it's about our children.

Remember – the law is on our side. It is time to change the culture of the system by giving us a way of identifying and celebrating those local authorities that are committed to working with us to deliver better outcomes for our children and holding those that don’t accountable!

Are you ready to turn your outrage into action?

Leave your thoughts in the comments here or send them in this form. If you just want to let us know you're pledging support, that's fine too!