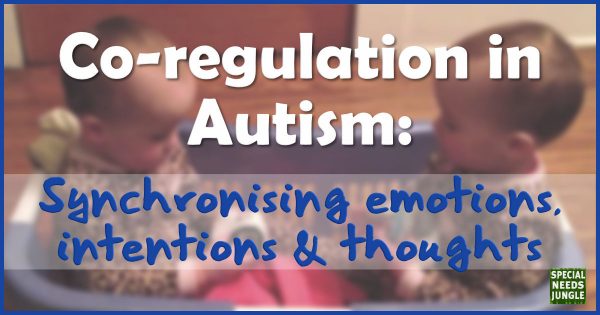 In a previous post in my series on co-regulation in autism, we looked here at what it is and how important it is to establish co-regulatory roles when working with people on the spectrum. This enables us to facilitate experience-sharing, emotion-sharing and to promote reciprocal enjoyment and competence. The ability to co-regulate is one of the earliest developmental milestones.

The ‘Still Face experiment’ by Edward Tronick is an excellent example of what happens with typical infants when co-regulation breaks down.

Look at how responsive this one year old is in the video to the social interaction and emotions that her mother is sharing with her by means of co-regulation.  Mum interacts with the baby by greeting her.  The baby greets Mum back: she says ‘dah!’ whilst referencing Mum and raising her eyebrows (the action of the Mum is contingent on but not controlled by the action of the baby: neither can complete the end goal (the reciprocal greeting) without stepping into their co-regulatory roles of greeter and greetee).  The baby then directs Mum’s attention to something by means of a point and Mum looks towards the point (roles of pointer and looker).  Emotions and intentions are co-ordinated.

The Mum then turns away from the baby and when she turns back, she is non-responsive. Within the first few seconds, we can see the baby’s emerging distress at this non-response (she arches her back and looks up).  The baby attempts to re-engage Mum by smiling, she points to direct Mum’s attention (I want to share this with you, Mum!), she reaches towards Mum and then when she sits back, her distress is clear.  She then screeches at Mum (which to me feels like a protest at the non-response) and finally turns away from Mum and starts to cry.

Look too at how quickly the baby is able to re-engage and be soothed once Mum makes the repair by interacting once again.  Mum initiates co-regulation by asking softly, ‘and what are you doing?’ to which the baby responds with a smile. Mum lifts her hands to the baby’s hands and leans in when the baby leans in – again each partner is stepping into their co-regulatory role.

Co-regulating actions as well as ‘conversation’

This is a clip of twin toddlers not only having a babbling conversation, but also stepping into co-regulatory action roles (you only need watch the first clip rather than the whole playlist).  Twin A in the basket is the ‘receiver’ and twin B outside the basket is the ‘sender’.  Twin B ‘sends’ a pair of socks to twin B, the receiver.  They have a quick babble ‘chat’ about the exchange.

Twin B goes to get another pair and twin A puts his hand out to receive it.  Twin B accidentally drops it as he passes it to his twin but quickly makes the co-regulatory repair by picking it up and handing it to twin A, who lets out a delightful chuckle.  Twin A is determined to get the next pair of socks that twin B brings over and seeks to remove them from twin B as he sits down in the basket.

There is a short tug of war over which twin A prevails and then interestingly, twin A realises that twin B also wants a pair of socks and so gives his sibling a different pair……actually averting a potential co-regulatory breakdown.  Not only is that lovely – it’s also a great example of how early we humans start to read each other’s intentions and emotions and it shows one of the reasons why this is so important.

In autism, co-regulation becomes difficult due to the natural feedback loop between child and parent having broken down when autism has got in the way of its development.

In the clip below from Bright Futures School where we use RDI to work on the difficulties at the heart of autism, Alex and Saoirse have just come back from the bathroom where Saoirse dried her hands on the towel that Alex held out and Alex made the ‘brrrrr’ noise when drying Saoirse’s hands.  Back in the classroom, Saoirse has been playing with the animals and the house on her own.

Alex gives herself a co-regulatory role (putting the animals in the towel and drying them) within a pattern that becomes established between the two of them – sender (Saoirse) and receiver/dryer (Alex, with the towel). Alex leans in and wiggles the towel, bringing Saoirse’s attention to it and inviting her to place an animal in it…..the start of a co-regulatory exchange.

Feedback relating to Alex is in black, with Sharon, our external RDI Consultant’s comments in green.

0.12 – Saoirse just puts an animal in the towel and Alex makes the ‘brrrr’ noise again
0.14 – Saoirse has a little smile to herself (she is enjoying the pattern, which would not have been available to her without the co-regulation between the two of them – here the co-reg is facilitating the enjoyment)
0.21 – Alex holds the towel out again, inviting Saoirse to place another animal.  There is no demand here – Saoirse can decide whether or not she wants to take part in the co-regulation. Saoirse adds a little prosody as she takes another animal. This seems to be her recognition of ‘same but different’…….the pattern is that she places the animal in the towel and Alex dries it and does the ‘brrrr’ noise – a similar pattern to previously in the bathroom, only this time it’s the animal in the towel rather than Saoirse’s hands.
0.24 – Alex waits for the slightest glance her way before she ‘plays her part’ spot on in terms of facilitating social referencing from Saoirse
0.34 – Saoirse goes with the pattern by giving Alex another animal (stepping into her co-reg role)
0.35 – This time Alex tries to add anticipation this acts as a ‘just noticeable difference’ (a JND is a small variation to the pattern.  It introduces unpredictability, which is difficult for Saoirse to manage).  Here the JND is around waiting a little longer.  The anticipation that Alex builds encourages Saoirse to emotion share with her
0.36 – Saoirse, using prosody and smiling, shares in the experience a little more
0.44 – This time as Saoirse adds the animal to the towel she also makes the noise herself okay now this to me is her becoming task focused & just getting the action done, rather than sharing in the experience with Alex, which Alex recognises.  This may be because Saoirse is having trouble with the challenge presented by the JND……too much uncertainty.
0.52 – Saoirse gives Alex another animal – but doesn’t look like the game is that much fun anymore exactly…task focused, not enjoying it as much (possibly due to the JND)
0.53 – Alex says ‘uh oh’ as the animal falls out - hoping Saoirse will make the repair, which she does
0.55 - Alex tries to add anticipation as Saoirse looks disengaged (the ‘flight’ response)
1.01 – Saoirse looks away – maybe Alex has waited too long to ‘do’ her part, but she decides to wait and pause.  Possibly this is Saoirse coming to terms with the JND of waiting a little longer
1.14 – Saoirse re-engages
1.16 – Saoirse goes to put something else in the towel but the dog is still there
1.20 – Alex isn’t sure if at this point Saoirse is thinking about what to do
1.22 – As Alex doesn’t want this unpredictability caused by the dog being there to be too much she offers a solution by holding the towel out for Saoirse
1.27 – Saoirse takes the solution and removes the dog
1.30 – The other object is straight in there now - with her own little prosody added
1.32 - Saoirse copies Alex’s prosody
1.33 – Good reference – perhaps Saoirse is asking why Alex is not doing the noise agree a kind of 'what's wrong?' – so Alex does the noise
1.44 – Saoirse holds up an animal and uses prosody (initiation to continue the pattern, so Alex continues)
1.46 – Saoirse uses prosody and gets up and is very smiley
1.58 – Another initiation from Saoirse – animal and prosody – but no real emotion sharing although Alex does get a referencing look around 'shall I take it now or not?'
2.06 – After Saoirse has completed her ‘role’ Alex puts the towel away. It’s good to see the interaction stop on a high point rather than pushing the activity for too long.

To help Saoirse cope better with unpredictability and uncertainty – so that it does not produce a ‘fight, flight or freeze’ response, Alex will need to get her thinking cap on around more 'same but different' frameworks & how she can introduce differing JND's within the engagement itself.  In order not to overwhelm Saoirse, it will need to be kept to one or two JNDs within a short session, as in this clip.  Saoirse needs time to accept & adjust to the JND's too.

This is all moving in the right direction, which is great to see.  Saoirse’s difficulty managing uncertainty and unpredictability means that we need to go ‘low and slow’ in terms of raising the bar within co-regulation.  Luckily we have the time and space at Bright Futures School to be able to do that.

Relationship-based social communication (RBSC) support is largely omitted from health, education and social care provision for children, young people and adults with autism, yet it underpins their ability to learn, to live independently, to make and maintain friendships, to secure meaningful employment and to have good mental health.