From today many parents of children with special educational and young people who have Education, Health and Care Plans will be receiving letters from the Department for Education containing a survey on their EHCP experience.

The survey is taking place between July to October and is a chance for families to express their views and the results from each local area in England. This, the DfE says, will help them and local authorities make improvements to the system in the future. Those contacted can complete the survey by web, post or phone. It is ONLY for EHCPs completed in 2015, not before or after.

There seems to have been so many surveys and reviews taking place recently. If all the advice received is actually acted upon, I am confidently expecting a seismic, positive shift in culture, funding and collaborative working practices in the next year. This will, of course, lead to families with disabled children and young people having their special needs met in a timely, compassionate manner  😉  🙄

Aaaanyway, experience-led cynicism aside, here's the information we've been asked to share. Where it says 'we', it isn't referring to SNJ, it's referring, of course, to the DfE. This is not an SNJ survey. We're sharing it for several reasons: to raise awareness for families receiving it in the post; so that families who do receive one in the post may be more encouraged to complete it if they've seen it referred to online; and so that you know why you may not receive an invitation to participate.

That said, we've provided much feedback to the DfE already and you are always welcome to send more in if you'd like to tell your story via the SNJ website. 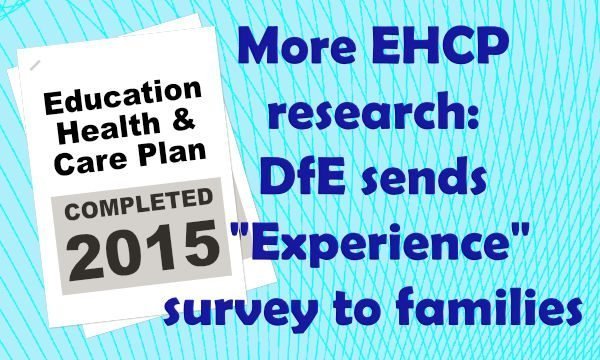 Why is it important that parents, carers and young people take part?

This is the only government survey of EHC experiences and this is a chance for families to express their views. The results will help the government and local authorities learn from parents’ experiences and make improvements to the system in the future. Ensuring children and young people with SEND and their families have a positive experience of the system is a central aim of SEND policy and we hope that
this survey will give us a representative picture of whether we’re achieving this. The results will be anonymous and will show which parts of the EHC process are working well or need more support and how this picture varies across the country.
The survey has been developed with an independent, expert advisory group including parent/carer forum representatives and is being carried out by IFF Research and Derby University.

Most families who started an EHC plan in 2015 will receive a letter during July to September 2016 inviting them to take part in the survey via an accessible web, postal or phone questionnaire. The results will be published in the New Year.

Can the survey affect a family’s EHC plan or the support they receive?

No. The survey is anonymous and confidential. It cannot affect an EHC plan in anyway. No one will know whether you have completed the survey or not. Families' responses will be combined and used to provide national and local results. The data from completed surveys will be securely retained, used only for the survey and then destroyed.

Why are only those who had plans finalised in 2015 being surveyed?

For this survey, to ensure the data is robust, we need the sample to be clearly defined. That is why we are using the period January to December 2015. Partly this is because having a cut-off point of December 2015 will allow families sufficient time to have formed opinions about how effective their plan is. Also, using only 2015 records will help us to know who is not proportionately represented in the survey and to make it representative by weighting the results appropriately. If families have an EHCP in place either before January 2015, or after December 2015, we do not want them to complete the survey.

Why will this survey only involve families who have EHC plans and not those who have been refused an assessment or plan?

This survey is aimed at better understanding experiences of getting a plan and how effective they are considered to be. DfE have commissioned separate research on dispute resolution that will include an assessment of services in place for families who have applied for, but not received, an EHC assessments or plan.

How have families been selected to participate in the survey?

Statutory information provided by early years settings, schools and post 16 providers have been used to sample all families with EHCP records in the data for 2015 – this represents a census approach.

Will participating families represent groups with different types of SEND and different backgrounds?

Why are families who have received a plan in 2016 not being included?

DfE databases require time to update so that they are robust and this has resulted in families with plans between January and December 2015 being sampled for this study. This will also allow for plans to have been in place for at least 6 months meaning families will have had some time to reflect on their experience and to see some initial effects from the EHCP being in place.

Will children and young people with varying physical and cognitive ability be able to provide their views?

The survey requests that young people complete it themselves or with the support of another person (such as a parent or carer). There are sections in the survey specifically asking for the views of the person the plan is about. The questionnaires are accessible as possible and offered via web, postal and telephone versions.

Will local authorities be provided with their area’s results?

Yes. We hope the results will help support local authorities. The proportion of completed surveys will vary naturally in each area but we expect to be able to provide robust local level results for most LAs. Areas with low volumes of EHC plans may only receive indicative results given small numbers of completed surveys.
For more information please email SEND.RESEARCH@education.gsi.gov.uk

So, as I mentioned earlier, a lot of information is being gathered, not least the review being carried out by Lee Scott. There has also been a DfE funded report by Amy Skipp, and Bren Prendergast's online parental survey. I hope the DfE also take these into account. Sadly, however, I wouldn't hold your breath for the Labour party's Review. I contacted Sharon Hodgson who launched their review recently but was told that as she's resigned her position in Labour's interminable in-fighting it was no longer anything to do with her.

Her researcher told me that: "We will be doing a full handover to the new Shadow Education Secretary, Angela Raynor, when the time can be found, and it will be up to her to decide what then happens with the review."

Make of that what you will.

NB: Several people have said that the link in the letter they received today is incorrect. Not a great start, but thanks to "Planet Autism", we can give you the correct link: http://www.ehcpsurvey.com/ REMEMBER: ONLY USE this link if you have received a letter from the Department for Education re the above survey.