I'm anticipating the next school year with a good deal of trepidation, thanks to the new SEND system. Some day in the next couple of years, the vast majority of our statemented children will be transitioning to an Education, Health and Care Plan.

Although the new laws came into force on September 1st, our children's statements will not change overnight into Education, Health and Care Plans. It may, in fact take 18 months or more, depending on your child's stage at school and your local authority.

There is still plenty of argument going on in SEN legal circles over where the new laws have fallen short. But speaking as a parent who worked as best as I personally was able on a small part of the reforms, along with many other parents, we have what we have. We now need to move forward and work together to try to make the spirit of the changes a reality and hope that those same legal minds can improve it where needed with case law over time. One noted authority, Steve Broach, has said that the new system, while far from perfect, is indeed an improvement on what we have previously had.

I think all the parents who worked - many for for several years - on these reforms should justly be very proud of what they have achieved; many by setting aside anger and past poor treatment or bad decision-making within LAs to do so. Even if  co-production often hasn't been what it was billed, we did what we could and we have made a difference in many ways.

As a parent I am, probably like you, concerned with the immediate matter of what happens now. I hope our recent Flow Charts 1-4 are of some help although of course, to get the detail, you'll need to read the CoP itself. As I have mentioned before, I am assuming that my sons who are 16 and 15, will both be transitioning in the coming months. Gulp! SEN Minister, Ed Timpson, told us in our video interview that 16 year olds must be the first priority in the move to EHCPs.

Reading our LA's information, it seems my boys will need to be re-assessed, but I have been assured this does not mean they will lose support. Transitioning means a whole load of work for me because if there is a shortage of trained Independent Supporters available, you can bet I won't be given one. Who would want me as a client anyway?

Son1 last month received his GCSE results. Considering he did so little work (he claims), he did amazingly well and has achieved the grades he needs. 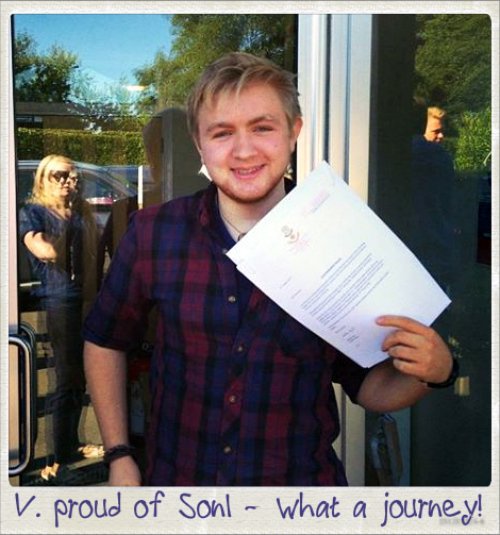 Son1 has taken the plunge into a 2000-student strong, mainstream, Sixth Form College after seven years of being safely cloistered in an independent specialist school for boys, where classes consisted of around 12 boys each. I am not entirely sure he has appreciated the scale of this change but, as ever, he knows best.

Although his statement has already been transferred into a Learning Disabilities Assessment, and we have met with the college's Learning Support Advisor, I am, as yet, unsure of their readiness or preparations for the new system. This college - indeed every FE college - will have a pretty big job on their hands because every young person with an LDA must surely be transferred over. What will they do about those going into their final A-Level year? If they are planning on University afterwards, an EHCP has no legal force there and with the coming cuts to the Disabled Students' Allowance it is unclear whether there will be any support available at all outside what any Uni is willing to provide.

Keep your hands off my expectations!

A recent report from the SEN reform evaluation company SQW into the Transition and engagement of Post-16 Providers found that while the relatively small number of these establishments meant "engaging" with them hadn't usually been much of a problem, all had expressed concerns about how the Learning Disability Assessment process had worked in their area. The areas wanted to improve this by focusing more on the long term outcomes of employment and independent living.

Oo, Duty to Admit, yes, that's the one where if your EHCP names the college as suitable, they have to let you in, whether or not the college agrees. Consultation is supposed to happen between college and LA before a college is named of course, but with only a limited number of mainstream providers, this may inevitably lead to expensive independent specialist providers being needed.

The use of out-of-county placements is highlighted as something the colleges are keen to limit because, they say, it limits the young person's ability to integrate with the local community. However, if they want young people with SEND to stay close to home, it follows that these Further Education colleges will need to look at providing suitable courses and supportive environments to enable those same young people to attend and progress. And that doesn't come cheap. Tricky eh?

It is my feeling that young people needing specialist environments out-of-county after 16 will still get them, at least for now, because their needs are usually far too complex for any mainstream college to meet satisfactorily without a huge investment in facilities and trained staff. The out-of-county option ends up looking a lot better value for money in the short term as these young people get wraparound care.

Yes, it would be ideal if every college had a specialist unit attached, perhaps residential even, but that's not the world we live in and never will be unless/until society fully commits to and funds true inclusivity.

One point I do take exception with is the use of  the term in the SQW report, "Managing family expectations". This is the OPPOSITE of co-production. I do not need someone to manage my expectations, thank you very much.

What I do need from the college and local authority is clearly set out information, transparency of decision-making, cooperative working where the parent/young person is not patronised or worse, promised support that is not then delivered and that the support offered is suitable and will lead to real progress towards an independent and meaningful life. Expectations should not need to be "managed" if the family is considered as part of the team.

There may be trouble ahead

Unfortunately, I can foresee other trouble ahead. Son1, who has Asperger's, likes to think he is invincible and, precisely because he has AS as well as being a teenager, may have difficulty in recognising and agreeing what his difficulties actually are and, therefore, what support he needs. Because he is 16, the law concerning Mental Capacity now unfortunately says he is in the "driving seat",  something about which he is very ambivalent.

We raised this issue of Mental Capacity at 16 when it first came to light, along with Jane McConnell of IPSEA. When the next draft of the SEND Code of Practice came out, a brand spanking new Appendix One miraculously appeared, clarifying that although 16+ year olds with SEND would be largely assumed to have, in most cases, mental capacity to make their own decisions about SEN support (Ha!), parents would be expected to be there supporting that decision-making every step of the way.

If the young person wants them to be, of course. In the case of most 16 year olds, especially those with special needs, I expect it will be more of a struggle to get them to take part at all, never mind get them to let their parents be involved. They have other things to do like, oh, I don't know, A-levels or other FE study or skills-based courses. Not to mention sleeping, lounging around, X-Box, Facebooking, Instagramming or arguing with siblings, etc, etc. Taking the lead in a co-produced EHCP? Not so much.

Nevertheless, we will all persevere and try our best to ensure they are as involved as they are able. Youngest, meanwhile isn't 16 until July 2015 so does this mean he will remain in the "passenger seat" while older boys in his year will be doing their own navigating?

For Sixth Form Colleges and other institutions and even for providers of Apprenticeships, this is a whole new world entirely. I have no idea how seriously colleges take an LDA because it isn't a legal document. I'm assuming that the Learning Support Department does read the LDA and take appropriate action, but when it's a statutory document, they will be expected to ensure that everything laid out in the provision is, in fact, provided. I would really like to investigate this more, so if you are an FE provider, do get in touch with how you are approaching the changes. These institutions have no experience in general of statutory support and so are going to have their work cut out for the next few years while they are on the learning curve.

We already have a date for Youngest's Annual Review, this October. I am expecting this to kick off his transition to an EHCP ready for whatever he wants to do after he turns 16. At this point in time he hasn't decided and I daren't voice any opinion in case he fixes me with a withering glare and decides to do the opposite. It really shouldn't matter anyway, as with the new "person-centred" approach, the support is built around the child, not the institution's currently available resources. In reality, if he stays on at his specialist school's sixth form it will of course, be easier to ensure he gets what he needs because they know him and I know them. But it is up to him to decide.

For my part, the next months are going to be hugely difficult. Quite apart from my own health situation, I will be "co-producing" (Oh yes, I will...) two new EHCPs alongside two reluctant young men. One will need supporting through GCSEs, their accompanying support arrangements and future 16+ choices, while the other will be adjusting to AS levels in a whole new environment. One that includes girls. Lots of girls.

On the plus side, I am familiar with how the new system is supposed to work, the local authority administering it and its department heads and I am sure they will be interested in my feedback going through it as a parent. I shall keep you posted and also ask that you share your own experiences with us so we can build up our own picture of implementation experiences. You can reach us here.