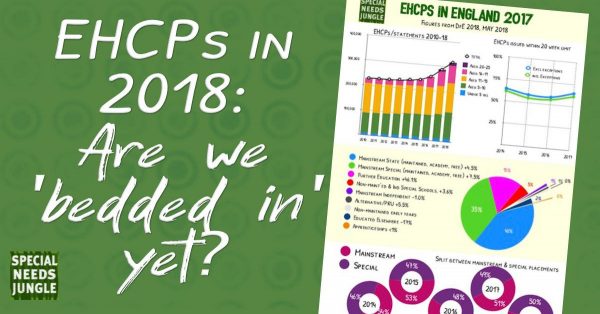 It’s the second May Bank Holiday – and for sad people like me, that means a special treat. Because that’s when the Department for Education (DfE) unloads its annual statistical review of Education, Health & Care Plans on an eager public.

The stats came out yesterday– the juicy bits are below, but first, a health warning or two….

What does the data tell us?

If you haven’t got a taste for number-crunching, head over to the infographic – the key messages are all there. But for the more adventurous amongst you, read on…

One of the main legislative changes that came in with the 2014 Children & Families Act was the extension of the right to statutory SEND provision up to the age of 25 in particular circumstances. The impact of this change is now starting to make itself felt in a big way. When LAs complain about resource shortages, this is where they have a real point – they now have to meet the needs of many more young people with SEND, and they haven’t had a meaningful uplift in resources to do it.

But the financial pain will be spread far and wide – and it’s the school sector that’s likely to take the brunt of it.

Eight years ago, there were tens of thousands more children with a statement of special educational needs in mainstream education than there were in special schools. That gap has now narrowed to nothing – and depending on how you squint at the data, the gap may have reversed.

There are now more children now with an EHCP or statement in special schools than there are in state mainstream schools- the vast majority of them in maintained special schools or special academies. That looks like a significant milestone to me.

Alternatively, are families being pushed towards special schools due to failures in mainstream placements – are some even being actively repelled by a minority of less inclusive mainstream schools? That seems more likely to me.

One striking trend that comes out in these latest figures is a sharp drop in the number of children with EHCPs and statements in mainstream SEND units and resource bases– a 9% fall in the last year alone. The drops are apparent not just in maintained mainstream schools, but in the fast-expanding mainstream academies sector too.

This is a trend that makes special school provision increasingly important to high-needs SEND – but how sustainable is the growth in special school placements? Talk to leaders in the sector, and they’ll tell you special school capacity is already bursting at the seams, and that there’s nowhere near enough coming online to meet expected demand. And they’re right.

Is it becoming harder to get an EHCP?

Not necessarily, according to these figures. Local authorities refused about 14,600 initial requests for an EHC needs assessment in 2017. That’s almost exactly the same number of refusals as in 2016, even though the number of requests in 2017 was far higher. That doesn’t necessarily mean that it’s any easier to get an EHCP though– in 2017, LAs were slightly more likely than before to refuse to produce an EHCP after conducting an EHC needs assessment.

And importantly, these broad, statistical brushstrokes tell you nothing about whether LAs have changed their thresholds for assessment, or whether these thresholds are lawful. But you get a better idea by looking at individual LAs, because the rate at which they refuse to conduct EHC needs assessments. Some LAs barely refused any requests, whilst others refused more than half of the requests they received– the latter looks particularly dodgy, given the extremely low threshold in law.

How quickly are the plans being produced?

In the vast majority of situations, LAs should complete the process of producing new EHCPs within 20 weeks. But ever since the SEND reforms became law in 2014, LAs as a whole, have fallen well short of this statutory requirement.

2017 was no exception, although the overall rate of completion within 20 weeks has improved slightly: from 59% in 2016 to 65% in 2017. That’s an improvement – but not one to cheer much about – it still leaves at least one in three EHCPs arriving late.

Again, this overall figure masks huge variation in performance between individual LAs– the worst of them managed less than 2% on time, but 23 LAs managed to complete more than 95% of their new EHCPs within 20 weeks.

Remember I said to watch out for LAs gaming the stats? This is one area where you need to be cautious. There’s a loophole that allows LAs to wriggle out of issuing plans on time, and yet again some councils appear to have made implausibly lavish use of it last year. The numbers also don’t tell you how badly delayed some of these EHCPs are – they just tell you whether now many took longer than 20 weeks, not how many took over 30 weeks, 40 weeks, or even a year. And that’s a real problem – check this article for more detail.

…and what about the statement conversions?

Over the last few months, SNJ has looked long and hard at the process of getting children with statements of special educational need transferred over to the new SEND system – you can read more here and here. What we’ve seen leaves us very concerned that many children who used to have statements now have very low-quality EHCPs.

But what about those who aren’t getting a plan at all? When they rolled out the new system, the Department for Education said – loudly, and clearly– that no child or young person with SEND should lose provision simply because they are moving over to the new SEND system.

The reality appears to have been very different. Between September 2014 and January 2018, over 7,600 children who had a statement of special educational need under the old system were refused an EHCP by their local authority.

At this stage, it’s very hard to say why these thousands of children & young people did not get an EHCP when they were transferred over to the new system. But the DfE data does allow us to take a look at where it happened – and it appears to be concentrated in a minority of LAs who appear to have been unusually unwilling to provide statemented children with an EHCP upon transfer.

The chances are high that there’s worse news to come on this front. The data that the DfE released yesterday stops in mid-January 2018 – almost exactly 10 weeks before the 31st March deadline to transfer statements over to the new SEND system. At that point in mid-January 2018, LAs still had to transfer 34,000 children with statements to the new system. 3,400 per week, a bureaucratic essay crisis on a stadium-sized scale.

The latest DfE figures can’t tell us what happened next. How many of these 34,000 kids didn’t get an EHCP on transfer? We don’t know yet. But the initial FOI probes suggest that a large number didn’t – potentially thousands more.

We’re going to find out, and we’ll be letting you know when we do.

We’re expecting another turbulent year in SEND. From the perspective of families, EHCPs appear to be in greater demand than ever before as a route to secure special educational provision.

But resources have never been tighter – and LA SEND managers are feeling the hot, fetid breath of their six-figure salaried superiors on their necks, demanding to know why costs can’t be controlled, why demand is spiralling, and why demand for EHCPs can’t be capped as it can be in other sectors. Children’s services in most LAs are close to financial meltdown – and high-needs SEND spending is no longer a fringe issue, but is now a serious contributor to that process.

That means that EHCPs are being increasingly characterised in county halls and borough HQs as an unsustainable cost sink. Many LAs are exploring ways of allocating more of their high-needs SEND funding without the tiresome burden of a legally-binding EHCP – and they are encountering resistance in the process.

Either way, the future of the EHCP is likely to come under more intense scrutiny from all quarters. The House of Commons Education Select Committee is due to investigate the world of SEND over the next few months. They’ve come at a hell of a moment.

Check out the infographic below, created by Tania. It's free to share, print and download for non-commercial purposes only. Here's the PDF for a printable version.