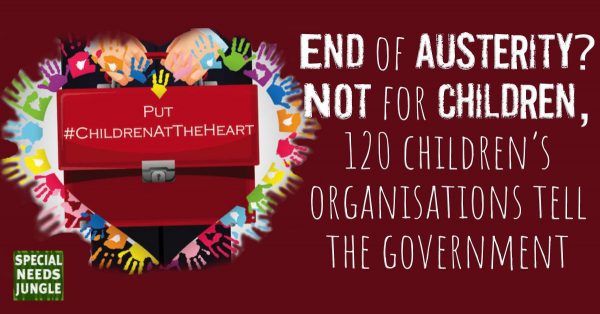 As the Budget approaches, this unprecedented coalition of children’s organisations has written an open letter to Downing Street,  calling for children and young people to be put at the heart of government spending decisions. The coalition is made up of organisations from across the child health, education, social care, disability and poverty sector.

As well as the budget looming, a government spending review is also being decided soon, which means everyone with an interest in the welfare of children (which should, of course, be everyone, full stop) must insist that urgent action be taken to put children first. Theresa May this month declared an 'end to austerity' and promised to 'boost' public service investment. But if this really is an end of almost a decade of punishing austerity (punishing for those who didn't actually cause it), then prove it by injecting much needed funds into children's services.

What does the letter say?

The letter, sent to both the Prime Minister and Chancellor, highlights the pressing challenges facing services and other support for children, showing that:

Despite Mrs May's promises on more funding, the open letter points to a growing body of evidence showing that significant challenges lie ahead. And of course, with the unknown landscape of Brexit on the horizon, what we will be dealing with post March 2019 is anyone's guess.

‘We’ve seen successive budgets come and go with token spending commitments for children and families. If austerity is really coming to an end, its high time the Government puts its money where its mouth is, and makes a concrete financial commitment to the welfare of children. Things we once took for granted, like family support, children’s centres, and respite care for families with disabled children are now the privilege of the few. In some areas of the country, over half the children are growing up in poverty...We are failing our children if we don’t put them at the heart of government spending.’ Anna Feuchtwang, Chief Executive of the National Children’s Bureau and Chair of End Child Poverty.

‘Working with more than one million children, young people, families and professionals, we have seen first-hand how severely cuts to services and support have affected them...All children should have the chance and the resources they need to live a fulfilling life and to succeed, and we urge the Chancellor to put children at the heart of decisions about spending and increase the investment in children and families.’ Dr Carol Homden CBE, CEO of Coram, said:

Both Renata and I will today be with the National Education Union, handing a 32,000-signature petition into No 10, calling for better SEND funding in schools. Both that, and this #childrenatherheart campaign, are examples of parents, service providers and schools coming together to put spotlight the persistent gaslighting that has been going on from the DfE about, "more money than ever being put into education".  This claim that has already been the subject of a public rebuke by The UK Statistics Authority (UKSA) as “potentially misleading”. It's a symptom of the times that a government department feels it's okay to take a leaf out of the Trumpian 'fake news' playbook and repeatedly insist something is true in the face of er, everyone else, saying it's, at best, a manipulation of statistics.

‘School funding is at breaking point with many head teachers having to drastically cut back on courses offered, resources, building repairs, school trips and after school clubs. Class sizes are being increased and the numbers of teachers and support staff are being reduced while begging letters for money to parents and carers are commonplace. Enough is enough – our schools need more funding if we are to give all our children, including those with SEND, the education they deserve.’ Kevin Courtney, Joint General Secretary of the National Education Union.

What can you do to help?

The coalition of organisations is asking parents, families and other members of the public to show their support by signing a public petition to the Government and using the hashtag #ChildrenAtTheHeart on social media.

‘We can’t stand by and watch children pay the bill for the recklessness and debts of bankers and politicians. Austerity is not over for children, it’s getting worse - and Theresa May must stop it.’ Kathy Evans, Chief Executive of Children England.

Nine children in every class of thirty are living under the official poverty line  now - and most have at least one parent in work. Children’s health and wellbeing, their educational outcomes, their life chances and what they will earn as adults are likely to be jeopardised by growing up in poverty.  If we want a fair start for every child, we need to reinstate the funding that has been cut from financial support for children.   Restoring the value of child benefit, ending the freeze on working age benefits  and reinstating the huge sums that were taken out of Universal Credit are essential first steps.’ Alison Garnham, Chief Executive of Child Poverty Action Group

A copy of the letter, along with references for the stats in the bulletpoints above, is available here: www.ncb.org.uk/childrenattheheart