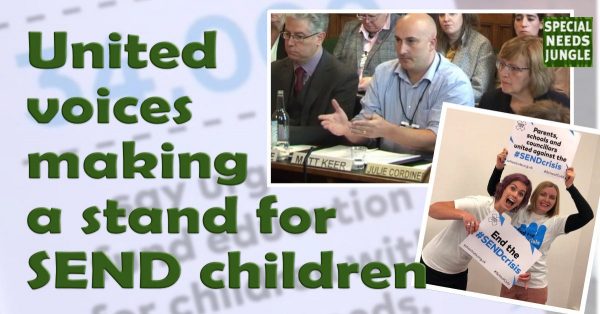 It's been a huge week for SEND so far. Not only have there been stories across mainstream media, including this one I'm quoted in, in The Guardian, Renata and I joined with the National Education Union and many other parents and practitioners to hand in a 34-thousand signature petition to the Department for Education, demanding more funding for SEND. At the same time, the second hearing for the Educational Select committee's SEND Inquiry was being held with our own Matt Keer taking centre stage.

Today, we're bringing you snapshots of each event, so if you missed the coverage or just would like to know more about what happened, you can catch up here.

First, Mari Burton from the NEU on the petition:

More than 34,000 people signed our petition calling for more funding for children and young people with special educational needs and disabilities in schools. On Tuesday, we shouted so loudly they couldn’t ignore us. Parents, teachers, local councillors, trade unionists, MPs and activists stood together to demand a better deal for our children with SEND.

The School Cuts Coalition has been working closely with a number of SEND campaigners and parent groups to highlight the pressure that lack of funding for SEND provision has put on parents, teachers, local authorities and, most importantly, children and young people. With over 34,000 signatures, our online petition calling for adequate funding for children with SEND made for heavy reading at the Department for Education where it was delivered by a group of around 60 supporters. (scroll through the pictures below!)

SEND provision in schools has been chronically underfunded for years, but with further real terms cuts to the education budget, coupled with a rapid increase in the number of children with a Statement or EHCP, we have seen funding for SEND move into a state of crisis.

For years, central Government has shifted the issue of SEND funding into the long grass by encouraging a ‘blame game’, pitting LAs, schools and parents against each other in fighting for adequate provision for their children. Now, we stand united in demanding solutions from a Government that claims to have put “more money than ever before” into special needs provision, even in the face of ever-increasing evidence of crisis in this sector.

The early release of the Budget this coming Monday (29thOctober) offers an opportunity for the Government to reassess school funding and address the concerns we raised in our petition. We have set 6 tests for this Budget and hope that it passes them all.

We believe a responsible and effective Budget should:

The fight for fair SEND funding isn’t over now the petition has been delivered. Your MP can influence the Chancellor before the Budget on the 29thOctober. Email them today and make sure they pledge to support the school cuts six tests for the budget.  You can email your MP in less than 30 seconds using this link: https://schoolcuts.org.uk/action/email-your-mp/

Together, we will win on school funding.

Down to the nitty-gritty on funding at the SEND Inquiry

Two of the MPs that spoke in the gathering before the petition was handed in had hot-footed it over there from the second hearing of the Education Select committee's SEND Inquiry. Both Emma Hardy and, in particular, James Frith, gave passionate speeches about the rights of disabled children to have the same access to education as every other child. It is clear that this is no longer a 'niche' issue that can be dismissed as just some moany parents banging on about it. It is fast reaching a critical mass and if the Chancellor doesn't have some very good news in the budget, it may be akin to lighting the bonfires a little early this year. (No, I'm not advocating burning down parliament; it's a metaphor for how cross we will all be - which may be worse)

The hearings were split with the first session hearing from witnesses, Justin Cooke, from Ambitious about Autism, Schools funding specialist, Julie Cordiner, and, of course, our own Matt Keer.

The general themes included the problem with the lack of specification of what the notional £6,000 per SEND pupil budget is for.

Ms Cordiner said, "The concept of 'what is normally available' in school isn’t defined… other than financially, £6000, but it’s open to interpretation and funding hasn’t kept pace with the demands generated by the reforms..."

Another issue is that although the reforms extended the age range from 16 up to 25, there has been no rise in funding to cover this huge rise in the number of young people who would need to be funded. Matt pointed to figures showing a 35% rise in children with statutory support between 2014-18  - that's an increase of 82,700 and the vast majority of those, 61,000, are in the Post 16 category, according to figured from the official school census.

Matt also pointed to the fact that although at secondary level there has been an increase of 2300 EHCPs, for those children who were "electively" home schooled, or "educated elsewhere", the rise was almost 3500 - is it possible that so many more parents felt they could do better by giving up their jobs to teach their children themselves, or is it, as is more likely, that there is a rising number of children who cannot find a suitable place in a school that will have them. This led into a discussion of "off-rolling" or exclusions, and how children with SEND = more costs and lower performance and so some schools would rather not have them, thank you very much. Where as the more inclusive school will take children and try their best to help them, but they will not get the funding they need  - especially from health services - that they need.

"It’s a desperation measure for some schools (off-rolling and exclusion), but it is also an ethos for other school who have extreme behaviour policies which do not help schools to be inclusive and they often get offroling and exclusion via that as well." Justin Cooke, from Ambitious about Autism,

The second session featured some head teachers and local authority representatives. While they were interesting, the issues were not too different from those voiced in the earlier session. As well as the points above, both talked about:

I was looking to cut some shorter clips but as I was spooling through, I found that the first session was so pertinent that it was almost impossible to cut anything out. So, there are a couple of clips in the embed below that relate to the huge amount of money spent on the reforms and how it has been used - or misused - by local authorities and secondly how councils are 'gate-keeping' to such an extent that children's needs are just not being met. If you want to watch - or listen - to the whole thing - or even just the first session, you can do so here but here is the clip that I think should be watched as a sad indictment of the last six (2012-today) of SEND reform.

Following his appearance, Matt has reflected on his experience of giving his evidence:

"To be honest, when the Committee announced that they were setting up an inquiry into SEND, my cynical bone in my body started to hum a bit. As a parent, I’ve been in the SEND game for a long while now, and I’ve seen inquiries come and go at local and national level. So initially, I wondered whether it was worth submitting evidence to this inquiry. But I did, and I’m glad that I made that decision.

"I’m a lot less cynical now, and here’s why: The committee members and the staff that support them made it easy for me to give them the best oral evidence I could. They were open and friendly, they had definitely read my written evidence, they’d clearly done further research, and they asked open questions.

"I’ve done evidence-gathering things like this at local level as a SEND parent, and honestly, it rarely works this way. The worst example I can recall was a ‘service reshaping’ webinar where a local authority consultant accidentally left the mike open at the end and wearily drawled, “Well, of course you only ever get the awkward squad at these events.” Sure you do, mate. Tick the box, collect the retainer payment, and move on. I experienced none of that on Tuesday. And that was genuinely refreshing.

"Normally, when you speak to people outside the bubble about the world of SEND, their eyes tend to glaze over a bit. Ever get that feeling when you’re talking to a muggle that they don’t quite believe you – that it can’t be like this, because it sounds too crazy to be true? I was expecting to get that feeling on Tuesday. And I didn’t.

"I’d forgotten how many MPs round that table already have experience of this system – because they’ve been teachers, or because they’ve worked in LAs, or even because they’ve already been on the personal receiving end of horrific, Kafkaesque, LA decision-making. I also didn’t realise just how much exposure some MPs round the table already had to SEND issues through the work they do in their local constituencies. My jaw sagged a bit when James Frith MP (Bury North) said that SEND was the second most common problem set he heard about in his local constituency surgeries.

So I learned a lot on Tuesday. I was the first parent to give oral evidence at this SEND inquiry. I would be very surprised if I’ll be the last. So for any other parent who might get called up, here’s what I’d advise:

It’s far too early to tell how this inquiry will pan out – much less what the Department for Education will do in response to it. But after this week, I’m optimistic that they’re on the right track."

The feeling I have is that never before have all the 'sides' been so united with the same message. Mr Hinds and Mr Hammond please take the rhetoric about more money than ever etc... it's not true, and even if it was, it's clearly not enough. Listen to what you have been told - and what we will continue to say - and act accordingly before those 34,000 and many more act themselves at the ballot box.
You can read about the first SEND inquiry hearing here