A shocker of a report was published yesterday into the progress on the funding boost to mental health services for young people that we talked about in this post 18 months ago. Back then, the government announced it was improving Child and Adolescent Mental Health Services (CAMHS) by promising an extra £1.4bn over five years.

At the time, I wrote that it sounded great if it was actually implemented. Luckily, the Independent Commission on Children and Young People’s Mental Health has, over the last year, been monitoring progress. It already wasn't looking good after a report in July 2015 from Young Minds found that, contrary to the plans, £35 million was cut in just one year.  The commission has now published its final report, A Time to Deliver, written by Emily Frith. And I don't think it's an exaggeration to say, especially as a parent, that so far, progress is nothing short of a national disgrace. 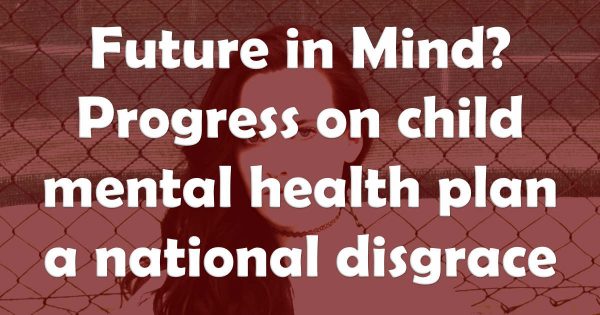 The funding equated to £250 million a year, however the commission found that only £143m was released in the first year, and of that, only £75m was distributed to clinical commissioning groups (the local health groups that fund GPs and NHS local health services). Of this £143 million, it's not yet clear how much of this has been spent on frontline services, but reports from mental health providers indicate that they have not yet seen increased investment.

Crucially, the funding for children and young people’s mental health has not been ring-fenced and so there is a risk that it will be spent on other priorities, such as those covered by national targets, like A&E waiting times. This single decision was putting the transformation process at risk.

There is a strong moral and economic case for investment in improving the wellbeing of our children and young people. The long term cost to our economy of mental health problems has been estimated to be as high as £105bn per year...In exploring progress so far, we welcome the hard work being undertaken across the country by many local health and care leaders. We also raised concerns that it is not possible to identify whether the funding has reached frontline services ... only 15 per cent of plans were of good quality on a series of five key measures devised by the Commission. Norman Lamb MP

The Commission faced difficulties in working out what had been spent and where, because of the lack of transparency in how data on funding CAMHS is collected. This is just not good enough. First, this is taxpayers' money and there should be complete transparency in how it is spent. Second, it is allocated to help our nations' future adults, on whose taxes this generation will depend in years to come. So it's a false economy to cut them off before they've had a chance to succeed at life, isn't it?

The report also highlights also widespread concern that council budget cuts have led to cuts in community mental health services (tier 2). The Children’s Society and others found that in the last five years local authority spending on early intervention services fell by 31 per cent in real terms. They estimate that the early intervention grant will see a 71 per cent cut by the end of the decade, a decimation in any terms.

There were some positives. For example in Birmingham, they had moved the age of transition to 25 but recognised that a smooth process was still important at the new transition point.

In Oxfordshire, CAMHS staff run weekly sessions within all secondary schools. Meanwhile Essex has developed a mental health app for service users. However, areas that had very ambitious plans emphasised the length of time it takes to embed new systems and working practices.

Early Intervention in the community and in education

These ere wide ranging and too much to include here but they include:

As I said, you must read the report to see these in full. These are good recommendations, and there is a checklist with some good practice recommendations for commissioners at the end. But this is the final report so who is going to monitor if anything is taken up and put into practice?

18 months after the start of "Future In Mind" this just SHOULD NOT BE THE CASE. It's indicative of a widespread failure of leadership, culture and funding priorities. It says to me that NHS leaders are not putting the child at the centre of care priorities and not even at the front of their minds. While this may be harsh judgement in some cases, as a whole it is clear that this is happening.

What's WRONG with these people? Why are they putting barriers of, "that's how things are done here" in the way of children's health? If it ain't working for the people the services are there for - children - and it clearly isn't, then bloody well change it. Spread good practice, where it is found - have a way for staff and parents to highlight it easily so it can be examined and promoted.

There is a massive amount of anger across the world right now for many different reasons. This is one more area where we MUST to stop thinking in silos and start thinking about how we those who are suffering the most - our children. It's not just the responsibility of the NHS, it is all our responsibility. It isn,'t just money that's needed, it's the will to change priorities and to put the child at the centre instead of the structure. What kind of society are we, anyway?