SNJ Note: Today we welcome back the SENCo, known by his Twitter handle, @AspieDeLaZouch. He wrote for us a few months ago about SEN Funding. Last week some research on SEN funding was released and ADLZ has written for us again, this time a hugely important analysis of new SEN Funding research released last week.

We're delighted that @AspiedeLaZouch has agreed to be one of our new columnists writing about SEND issues he encounters as a SENCo, bringing an SEN teacher's view from the coalface to SNJ.

When I first wrote about the DfE’s consultation on funding for special educational needs, back in January, I asked the DfE to consider how they could engage parents and young people. “Whose views could possibly matter more…?” I asked, with the hashtag #CountMeIn.

To be fair, Stuart Miller at the DfE and Ben Bryant at research partner ISOS were both quick to acknowledge that they had some work to do in that respect and that this could only be a start, not the end of the story. Last week saw the publication of the ISOS report and, no matter what age your child is or which sector of education you are involved with, it matters to you. 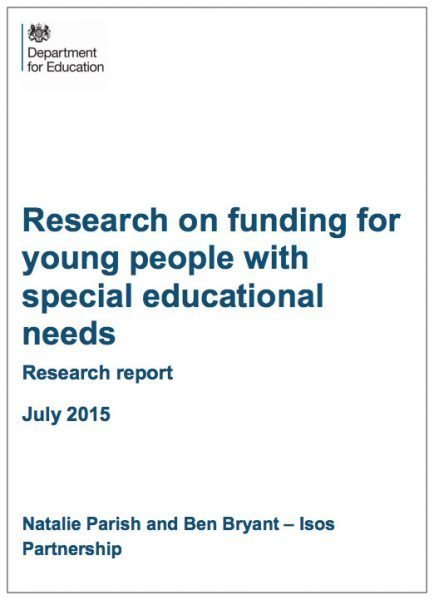 FIRST: It matters, first, because it’s detailed and intelligently designed: 13 contrasting Local Authorities were analysed in depth to understand how fair SEND funding systems really are, in:

Again to be fair, some parents were consulted (Ch. 12) and the researchers, led by Bryant and Natalie Parish, tackled all the complex issues. Natalie has experience of developing education policy at local, national and international level and it shows: this is research of a high standard. I’ll go further: it’s the BEST attempt we’ve ever seen to re-frame the SEND funding problem.

SECOND: It matters, secondly, because it shows there is HUGE unfairness in the current system of funding schools at a time when this government is set to hand more schools over to multi-academy trusts. That’s going to make transparency even more… precious. The very real possibility of moving to, “a funding formula for schools that significantly reduced, or removed, local authority discretion” is acknowledged in Chapter 7.

I’m guessing this was part of the brief and it has major implications for SEND. If LAs (oh, how I love them…) assess children and young people’s needs but no longer control the resources to meet them, that could end a conflict of interest we've always complained about. But Bryant and Parish highlight another conflict: a really good national formula (and they've tested one) could produce fairer SEND funding but local decision-making is still key to the choices facing parents. According to Simon Knight, Deputy Headteacher at Frank Wise Teaching School in Oxfordshire (a 2-19 special school), the special school sector needs, “a better strategic plan for meeting the changing need within localities”. The ISOS report also places strong emphasis on the need for Clinical Commissioning Groups to be part of this strategic process, and CCGs have their roots in localities. Let’s not kid ourselves: the solution to SEND funding requires better practice – much better - at both national and local level and the two cannot be divorced.

THIRD: Thirdly, it matters because, as the report shows, the funding changes made two years ago to underpin the SEND reforms are seriously flawed. The idea that mainstream schools would be guided by a ‘notional’ (but not ring-fenced) budget for SEND was always unrealistic; schools which are genuinely inclusive spend way beyond that figure, others pay lip-service to it. Do you know what your school’s Notional SEN Budget is - or how you’d find out? ISOS have shown that the distribution of this funding is, in any case, hopelessly mismatched against the actual needs. An example: a primary school has a Notional SEN budget for each child on the SEND register of £2,200 while others in the same LA, with almost identical numbers of SEND children, have a Notional SEN Budget of up to 7 times as much.

It matters especially if, as some Local Authorities suggested to the researchers, there is a long-term increase in the number of children with very high-need, low incidence SEND as a result of advances in treatment and survival rates for premature babies (Ch. 12). This is just one of many factors which make the Early Years sector (Ch. 8) perhaps the most problematic in this report. Nowhere is the gulf between theory and practice, between promise and delivery, between duty and discretion, so baffling. Even ISOS can’t quite get a handle on it.

They argue that problems of small scale, varying needs, unpredictable demand and different interpretations of the rules mean that a national system can’t be imposed without excessive bureaucracy. They may be right. But they're aware that central support services, vital to SEND provision in the early years, are reducing because Local Authorities are under massive pressure to scrap anything and everything that isn't nailed down. So having set out to find ways to build fairness into the education system at every level, I think ISOS shied away from this one. EY provision is the first experience parents have of society’s preparedness to welcome their child on equal terms. It’s not good enough to suggest that, “clear expectations” should be, “part of the ongoing development of the local offer” or that the DfE can solve this problem with webinars.

So what now? An extensive consultation process was promised in a House of Commons Written Statement last Thursday by Sam Gyimah, the Parliamentary Under Secretary of State for Childcare and Education. If that process builds on the ISOS report, we can expect to see proposals to:

Am I happy with that? I’m happy that the researchers have understood the problems they were looking at, i.e. funding at LA-level and school-level. The issues with funding for individual children are separate: the EHCP process is already under investigation and, in the opportunities I've been given recently to voice the concerns we all share, I've found a very good understanding at the DfE about what’s not working.

They know: believe me, they know. So, for now, ISOS can #CountMeIn.

Thank you, thank you, thank you for shedding some light on this. I’ve always been puzzled by the government framing the problem with SEN support in terms of ‘conflict of interest’ within LAs. There has been a conflict of interest, but only because of funding structures set up by central government. The root cause of the SEND ‘problem’ is the way children with SEND are perceived by central government. Children with SEND happen because of natural variations in human populations. They are not usually the result of poor parenting or poor teaching. There is no reason for those children all… Read more »

Thank you for this – very useful, very helpful. Have circulated it and will read report. Btw – the link to the document isn’t attached to the image in the article: https://www.gov.uk/government/publications/funding-for-young-people-with-special-educational-needs

Great summary, thanks. As a parent funding is one of the biggest issues we come across – and it’s not as if we are asking for diamond studded care, just the basic help and education our child needs. Would love to see planning take place on any scale rather than the stick your head in the sand and pretend it isn’t happening approach which some LAs seem to favour…..