I've always found normal to be rather dull. But I have children with autism and a diagnosis myself, so maybe I would say that.

But what is normal, anyway? And why are some people who deem themselves to be so-called 'normal' so happy to point out and ridicule those who they think are either side of the middle?

As we're still in Autism Awareness Month, today we're featuring an article from Jack Welch, Vice-Chair of Ambitious about Autism’s Youth Council. Jack is exploring the concept of "normal" as part of AoA's "Know Your Normal" campaign 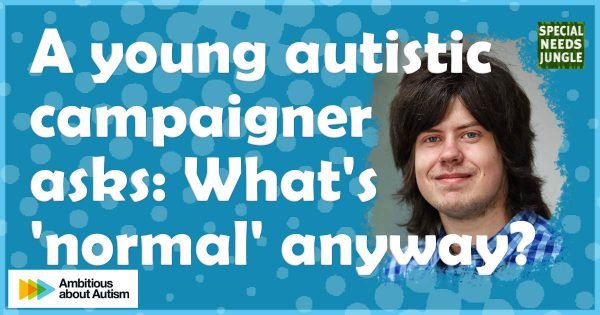 Normal is in the Eye of the Beholder - Jack Welch

Of all the derogatory insults that are often aimed at autistic people and the wider disabled community, being referred to as ‘not normal’ or ‘abnormal’ are perhaps the most hurtful. They are not only crude and vulgar but, unfortunately, they are used with an increasing frequency by people who have no idea how much pain it causes us.

In mainstream education, where 70% of autistic children are educated, the likelihood you will be called one or more of these hurtful names are, unfortunately, a foregone conclusion. When you’re at school, you want, and need, to blend in with your peers. However, it can be a constant struggle to build and maintain relationships during your school years. The definition of ‘normal’ is characterised by everything that we are not.

Now we, the Youth Council at Ambitious about Autism, are reclaiming the word ‘normal’ where it rightfully belongs during this April’s World Autism Awareness Month. We want to remind people that everyone’s ‘normal’ is different.

We’ve launched the ‘Know Your Normal’ campaign on World Autism Awareness Day to celebrate all the quirks and idiosyncrasies that make us who we are and, of course to challenge people’s perception of ‘normal’. More importantly, we want help all young people with autism to feel comfortable with themselves.

Each of us has our own habits which make us who we are; to expect everyone to act the same is unhelpful. We disagree with being told that being different is wrong. Autistic people should be appreciated for who they are and what they do to make their communities a better place for everyone.

myVoice is a project for 16-25 year olds with autism. It's funded by the Department of Health, and it's all about connecting you with other young adults with autism and helping you to have a say in your local communities. Over the last year, the myVoice volunteers have given up more than 900 hours of their time to help and support other children and young people with autism. They have  also reached over 650 decision makers through their work. I believe that we have proved ourselves to be an effective campaigning force and we want to ensure the world sees the values of autism.

However, we, like everyone else, can sometimes get sick and change in our habits – a departure from our normal - which could be an indication that all is not well.

For our Know Your Normal campaign, we have developed a toolkit to help young people, whether they are autistic or not, to describe what their ‘normal’ looks like to them. We hope this will help them and those people closest to them, notice when something changes and make it easier to get help when it’s needed.

We are calling on people to tell us what makes them unique using the hashtag #knowyournormal - it’s really simple free way for people to show their support. We also created a short animated film to explain that everyone’s normal is different, and to raise awareness that changes in our regular behaviour might be a sign that something is not right.

Additionally, we have put together a pack of postcards people can use to introduce themselves to the people around them. This means young people don’t constantly have to explain themselves – when they are just doing things that are normal to them.

You can find the toolkit at www.knowyournormal.co.uk Please show your support during World Autism Awareness Month by tweeting your unique habits using the hashtag #knowyournormal to show what your normal is and so help us to celebrate our differences.

We hope that this campaign will raise awareness and understanding of autism and ensure people are tolerant to difference, in whatever form that may take. We hope that as a result of this campaign, fewer autistic people will be described as “abnormal”. We hope that instead everyone will understand that no one person, with or without autism, is the same and that is something to be celebrated