Having a child with rare disease can mean that you are given very little information about their condition. Parent carers find themselves becoming the expert, rather than the professionals who are meant to have all the answers. Families find themselves explaining the symptoms of a condition that no one has heard of, but that has completely changed their lives, over and over.

Today's post is giving you information about a grave threat to rare disease treatments on the NHS and we hope you will help take action below. 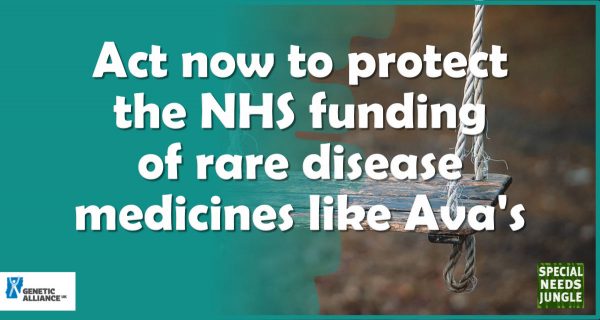 One of the things that we hear from families with all different types of rare genetic conditions is that there is almost never an effective treatment, and there is often a complete absence of anything resembling a cure.

This is changing. The UK is a world leader in genomic research, innovation and the life sciences in general – so whilst progress can seem slow to non-existent, treatments that can completely change the lives of families affected by rare genetic conditions are now trickling through the pipe line and finding their way to patients.

Another positive is that after a long delay, the government has also agreed that NHS England will implement the UK Rare Disease Strategy in England, the last home nation to do so.

But we’re facing a massive barrier. Before a ground breaking treatment can be made available it must be evaluated by the National Institute for Health and Care Excellence (NICE) or NHS England to decide whether they should be funded.

All the years in labs and clinics lead to, in the end, this one question; will the NHS pay for it? And all too regularly the answer is no. This happens for a number of reasons, including whether the treatment works and whether the cost of the medicine is too high in comparison to how life-changing it is. The process to get a drug funded by the NHS is often long; it can take years, and requires sustained efforts by patient groups to push for funding.

This week we spoke to Georgina, mum to Ava who was diagnosed with Metachromatic Leukodystrophy (MLD) in 2013 who has been lucky enough to access a gene therapy for her condition through a clinical trial, which is not currently available through the NHS in the UK. MLD is a degenerative condition that means children affected will progressively lose skills. Georgina told us:

“When my daughter Ava (10) was diagnosed with Metachromatic Leukodystrophy in 2013, we were informed that she would progressively lose all of her abilities and then die. We were told to take her home and make her comfortable until she passed away.

"On 28th March 2014 however she was fortunate enough to take part in a Gene Therapy clinical trial in Milan. This week we have celebrated the third anniversary of her receiving her new DNA, her 're-birthday', which has successfully arrested development of her disease. She will be attending school, in the same class, with her same friends, as she did before her diagnosis. We dare not think of what state she would have been in, if still with us at all, without this treatment. It has literally given her a second chance of life.

"We had an agonising ten month wait for the treatment, during which time she could have lost her eligibility to participate, due to progression of the disease. Thankfully she remained stable. However, we know several other MLD affected children who have not had time on their side and who therefore could not receive the treatment. Many of them will not make it to their next birthdays. We desperately need to ensure that more children have access to these life saving opportunities.”

In 2013, NICE recognised the particular problems that rare disease patients face in finding treatments for their conditions. These include having very few people on clinical trials because each condition affects very few people and Quality Adjusted Life Years (QALYs) - the usual measure for the impact of a treatment- being completely inappropriate to understand the effect of these medicines.

In response, they launched the Highly Specialised Technologies (HST) programme to evaluate these medicines for funding. HST specifically took these barriers into consideration in its design to make the evaluation process fair for all.

Unfortunately for rare disease patients, a few weeks ago NICE announced measures to limit recommendations by the HST Evaluation programme, including adding QALYs back into the equation.

These proposals will effectively stop access to new innovative treatments for rare genetic conditions in England. With the help of our members we have called for a halt in the implementation of these proposals, planned for 1 April 2017, to ensure that NICE’s and NHS England’s approaches are in step with what families affected by rare genetic conditions in the UK need.

You can find out more about NICEs plans for rare disease medicines here.

Letter to Jeremy Hunt MP about the changes here.