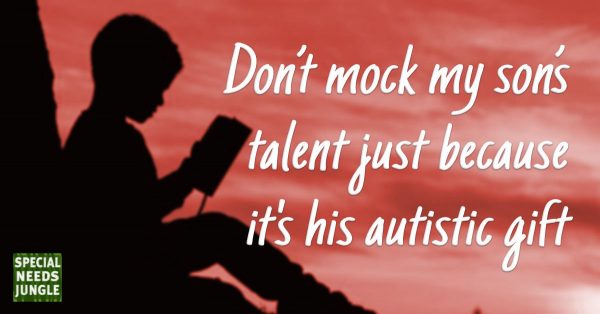 We're not usually mocked for something we're particularly talented at. Yet today's guest post, from SEND blogger, itmustbemum, is about just that. Why, she asks, do some people think it's okay to ridicule her son just because his talent for facts is rooted in his autism?

Itmustbemum: Don’t mock my son’s talent just because it's his autistic gift

Would you mock a man that was incredible at hopping... because he had one leg?  Would the skill have less value once you realised he couldn't walk without assistance?

Would you lack respect for the lip readers that help the police... because they are deaf?  Does this mean their talent is worth less?

Do the successes of a wealthy businessman lack value to you because he is also dyslexic?  Do you see them as having less value because their spelling or executive function is "less than."

Some time ago Peter, for the first time, experienced first-hand a searing emotional pain after an adult mocked and laughed at his incredible knowledge.  He sobbed all the way home feeling discriminated against and powerless to change that.  For the first time, he felt like a non-person.  Less than.  He knew that the other young people in the room were valued and revered for their knowledge or talent.  His were valued less because he is perceived to have deficits.

I suppose, what I am asking, is, is a person with a difference to the majority 'fair game'?  Can we discount what they are good at, laugh about it or even openly mock them because they also have a disability, or struggle at something we can manage with relative ease?

What makes us value a strength less when it is accompanied by a perceived weakness?

Are we, deep down, scared of people whose differences also give them talents that we lack?

In this case, Peter's difficulty is reading social cues from others.  He is acutely aware of this and worries terribly.  Before planned social events, he works hard to think about it and plan for how he will socialise.  At the same time, he will look to ensure he is doing this without upsetting, offending, or in general 'doing it wrong'.  He so badly doesn't want to get it wrong.  I think this is because he is very socially motivated, but also that he is intrinsically kind.  He wants to be around people.  He wants to enjoy conversations, learn from people, share what he knows and to feel he has contributed.  He wants to feel valued and, I think helpful.  To achieve this, I suspect he has to work harder than I will ever truly know.  He will never stop worrying that he may have unwittingly offended or upset the very people he wants to be with.

Peter's knowledge is incredible.  Spending months out of school every year for the last 4 years, and not being academically challenged as much as he would like when in school, has left him with a craving to learn.  He has detailed knowledge of computers and programming, Middle East politics, both world wars, Elon Musk's businesses and his favourite mobile phone company, to name a few.  He has strong general knowledge on many other subjects - dozens, probably, including race discrimination, as it happens.

Our family and close friends respect his hard work and knowledge, massively.  I call him my Wikipedia, he says he is better because he is accurate!  The library in his head grows weekly in response to questions he can't answer - he will set about topping it up wherever he sees a gap.

I too have been guilty of being dismissive about autistic traits in a passive way in the past,  I know I have. I am ashamed, but I do forgive myself.  I learn from Peter and others and I hope that I can help others to do the same.

Discrimination is not something he has experienced first-hand before.  I have felt it, on his behalf, especially from his GP as it happens, but this particular experience left him with a pain he hasn't felt before.  I know he will never forget it.

SEND blogger, itmustbemum is mum to Peter and Lily. She once had a job, a career even and an identity all of her own.  Since her son, Peter had the bad luck of not having his needs met in school, Peter and Lily’s mum started to become known as ‘Mum’ and had to give up her career (temporarily, we hope) as Peter became very ill.

‘Mum’ has an interest in the implementation of Public Policy (this was, in fact, her career and the subject of her Master’s dissertation).  Stripping her of a title and income did not mean this interest and need for intellectual challenge disappeared.  Once Peter became more stable, and she was able to reflect on the horrors of the SEND system she channelled her energy in to sharing information with other parents. Her hope was that by providing some sort of translation of what ‘should’ be happening, by holding up a mirror to some of the poor practice that is common and by reflecting on her own experience, other families would be helped.

Latterly she has had to good fortune of experiencing some of the best SEN practice our education system has to offer and it has been a privilege to share this too.  She learns daily from her children who, after all are the real experts.

Find her showcase post on SNJ here and here you can find the excellent itmustbemum blog (where SNJ team member, Ginger, also blogs)