During the Christmas break, as we struggled with the chaos that changes to routine can bring to our homes, the Department for Education put out a statement saying "Parents of children with special educational needs (SEN) are happier than ever with the new support available and have much more control over the services they are receiving."

Now, my New Year resolution is to be "impeccable with my word" but this statement makes it very difficult for me to keep such a resolution.  It is made even more of a challenge when I then read:

"Findings from the pilots of the measures - being test-driven by over 2,000 families across 31 councils - show that:

These figures were taken from an evaluation by SQW wherein they surveyed 237 families (out of the 2000) and compared them to 226 families who were not part of the pathfinder process. 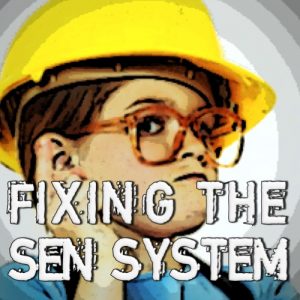 88% of the pathfinder families did feel that their views had been taken into consideration; compared to 73% of those who were not part of the pathfinder.  So, yes, a 15% increase is positive.  However, as the average pathfinder family was only surveyed 11 weeks after their Educational Health & Care Plan was signed off (compared to 8 months for non-pathfinder families), the chances are that they have not had the chance to try to appeal any of the decisions yet if they feel that is necessary - good luck with that if/when they do.  Those would be stats we would really like to see.

What the DfE press release also doesn't address is that the same report shows that only a third (34%) of those pathfinder families surveyed felt their child's views had been taken into account.  In the non-pathfinder families, this was 32%; barely an increase at all.  As the reforms are supposed to be about making the process, "person centred", how can families be "happier than ever" when the person about whom the process is supposed to help is not necessarily having their views listened to?

Additionally, the statement from the Department for Education doesn't mention that in the same report, it is apparent that families involved with the pathfinder had an average of 42 hours used to complete the process, compared to only 30 hours for those who were not involved with the pathfinder.   How realistic is an additional 12 hours per family going to be in the real world?  If you look at Kent, where we have approximately 6500 children with statements and Essex, where there are approximately 7500 families, who is going to fund an additional 78-90,000 hours at a time when huge cuts are being made by central Government to the local authority funding?

The Government has also announced that there will be an additional £70m for the 121 non-pathfinder local authorities to help them "catch up". Will this money make a difference, do you think?

Again, I am going to harp back to "culture change".  The changes being recommended (whether we agree with them or not) can be achieved but only if the culture of "doing to" and not "doing with" changes.

In the "Inner Game of Tennis", the author Timothy Galloway produced an equation relating to tennis players but I believe, it can also be used for the SEN reforms.

Performance is how well you actually do something

Potential is what we are capable of

Interference is the various factors that block the release of the potential.  Interference comes in various shapes and sizes and can include lack of commitment, lack of knowledge, personalities, personal experiences, bad leadership, lack of experience and so on and so forth.

The DfE is talking about the 'potential' of the SEN reforms, whereas we are living in the real world and having experienced this process ourselves on more than one occasion, we are thinking about the 'interferences' or barriers.  Our experience means that we are very conscious of the interferences within local authorities and NHS.  We are also aware that the reforms won't change a thing for families like ours if the 'interferences' are not blocked or removed.

In the world where the DfE appear to be living, there are no 'interferences' and the performance of the reforms will totally match the potential.  However, families (and a lot of local authority and NHS staff) will know that the interferences play the largest part of the equation.

So, I again implore the Minister in charge of the reforms, Edward Timpson and his crew, to look again at the Intereferences/Culture Change or whatever you wish to call it.  Without this being addressed, then there is an awful lot of money likely to be wasted.