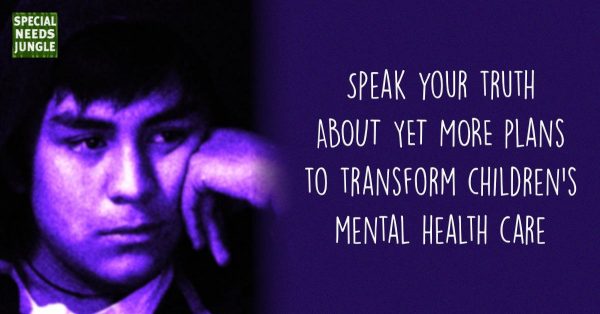 Mental Health is one of the most challenging areas of the NHS, especially when it comes to providing effective, compassionate help for our children. In December 2017, the government launched a consultation on its plans for “Transforming Children’s and Young Peoples Mental Health”. It was in response to the vision Future in Mind promoting, protecting and improving our children and young people’s mental health and wellbeing. That policy has been a bit of a dud so far - many areas say they have seen none of the money earmarked. I'm sure the fact that it wasn't ringfenced had absolutely nothing to do with that...

The (Future in Mind) funding equated to £250 million a year, however the commission found that only £143m was released in the first year, and of that, only £75m was distributed to clinical commissioning groups (the local health groups that fund GPs and NHS local health services). Of this £143 million, it's not yet clear how much of this has been spent on frontline services, but reports from mental health providers indicate that they have not yet seen increased investment. From SNJ post, "Future in Mind? Progress on child mental health plan a national disgrace" Nov 2016

So it seems they're having another go and it is VITAL you put your views - tell the government the truth about your family's experience or, if you're an education or CAMHS professional, your experience in your workplace.

It is so important to remember that a child with untreated mental ill-health will become an adult with mental ill-health and we are adults for far longer than we are children. Therefore, it is even more cost-effective to put the budget into supporting and helping children and young people.

What more convincing is needed?

I have read through the green paper and these are some of the key things the Government are proposing or have done to increase support for mental health which include:

On reading this, I was initially impressed. Great to have an additional £1.4 billion available and that 3,400 additional staff will be trained in delivering evidence-based treatments (I am wondering what these might be) but then I read further and the statistics suggest that 850,000 children will have a diagnosable mental health disorder in the UK today.

These conditions will certainly include disorders such as anxiety, depression, ADHD, ASD, selective mutism to name a few but we are talking diagnosable conditions. Not just feeling sad for a few days or worrying about exams which of course is completely natural and something that most people experience but a fully diagnosable clinical depression or an anxiety disorder such as OCD or social anxiety. This is serious stuff and any green paper stating to be able to fix this better be worth its weight believe me.

My experience as a young person's counsellor

I work in many different schools and I get to see some of the things that occur on a daily basis, particularly what schools are ever-increasingly expected to manage with ever-decreasing budgets. I remember hearing the excitement in a teacher’s voice when they were told they could have a class budget to buy glue sticks and scissors and other equipment as they had been previously funding this themselves! I see children experiencing extreme difficulties with their mental health and when I speak to the parents they tell me they have been waiting months for an appointment in CAMHS and I know from SNJ's readers that this is an all-too-common experience.

We have a Children and Adolescents Mental Health (CAMHS) service so stretched that unless you write the correct ‘buzz words’ in your referral letter or your child has actively attempted suicide, you are continually put at the bottom pf the pile. Waiting lists in my area are exceeding 18 months for some cases which is completely unacceptable. Surrey and Borders NHS Trust have been referred to Healthwatch and have until the 20th Feburary to explain why this is happening.

I can’t speak for every CAMHS service, but I am aware that staff retention (primarily because of workloads and expectations) in some areas is a huge problem and will be a big factor in the ever increasing waiting times.

CAMHS dumped my son for being a "non-engager"

But knowing what the challenges are doesn’t help our children. My son was unable to attend school for four years and during that time nobody wanted to recognise that he was suffering (and I don’t say suffering lightly) from profound anxiety, unable to leave the house or engage with healthcare professionals. He was dumped rather unceremoniously by CAMHS as a “non-engager” – they could only help those who would engage with the services that they offered. And just what were those services? Something they described as "half an appointment" (I never did find out what that was), every two to three weeks. Is it any wonder her was unable to engage…

So I am hoping the Government is putting his money where its mouth is and that CAMHS will be able to step up to the challenge – if this doesn’t happen and we continue to fail more and more children with mental ill health then what next? What is the answer to this ever-increasing epidemic?

*VITAL to put your views forward*

I hope this will help you to put your own views forward to the consultation, which is open until 2nd March 2018. You can add your views here https://engage.dh.gov.uk/youngmentalhealth/children-and-young-peoples-mental-health-consultation/  Watch the video below for more information for young people.