Pupils with special educational needs and disabilities (SEND) are at risk of being turned away by mainstream schools due to a lack of funding and rising demand, according to The Local Government Association

It’s warning that if the Government does not adequately fund SEND, children with high needs or disabilities could miss out on a mainstream education. The LGA, which represents more than 370 local authorities, made the remarkable warning as part of its response to the Government’s consultation on the high needs funding formula for schools. 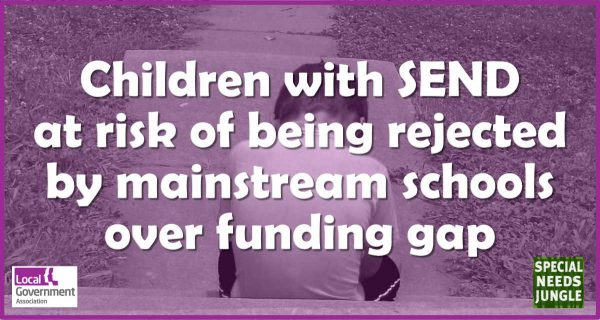 It says analysis of Department for Education data reveals that in the past four years, there has been a substantial increase in the number of pupils with SEND who attend a specialist school setting, up from 5.6 per cent in 2012 to 8.5 per cent in 2016. The proportion of pupils in independent schools has moved from 4.5 per cent to 6.3 per cent over the same period.

It’s true that the High Needs Dedicated Schools Grant has been static in recent years. This has put local budgets under increasing pressure as the number of children with extra needs rises. Just one example is advances in neonatal medicine mean more preemies survive, but often with disabilities that need to be provided for and funded. The incidence and recognition of autism is also rising.

Councils have had to meet the difference by topping up high needs funding from other budgets where necessary, however the consultation suggests that this flexibility will no longer be available to local authorities, making it even more difficult to provide children with the support they need. This has been an important mechanism for local authorities to counter the impacts of reduced budgets.

The placement analysis is a double-edged sword. On the one hand to be sure, lack of funding is unsustainable all round. However, it may well be evidence that the changes to SEND, favouring the parental preference for all but non-section 41 independent special schools is starting to making a difference.

On the plus side, these children will be in the most suitable setting to help their special educational needs. But the cost of this will be having consequences on council SEND budgets. Specialist settings are more expensive than mainstream schools and LAs having to fund them as part of a child’s Education, Health and Care Plan (EHCP) will be eating away at available funds.

This puts LAs in a quandary. They must, by law, provide suitable provision and placements for disabled children (more on this later) but the high cost means that even if they wanted to build more suitable schools themselves, they couldn’t afford to. But this is just one example and definitely not to blame for the pressures on LA education budgets.

As our SNJ columnist, Nancy Gedge, of the Driver Youth Trust, points out, “It isn't just students with SEND in mainstream, it's students with SEND wherever they are, full stop. And more, it's all the students, in all the schools, who will be feeling the effects of inadequate school funding, regardless of their needs. Fairer funding is one thing, underfunding is quite another.”

The LGA is calling on the Government to provide additional funding to meet increasing pressures. Otherwise, it says, councils will be put in an impossible situation where they may not be able to fund enough places for those with the highest needs or will be unable to ‘top up’ provisions for pupils with high needs attending mainstream schools.

Worryingly, the recent £215 million injection for SEND infrastructure and the other money to fund implementation isn’t ring-fenced and with councils under pressure in every department, it is far from certain that council leaders won’t be dipping into it for other areas outside education.

What happens if LAs don’t get more money?

The LGA says: “If councils do not receive sufficient funding to cover high cost SEND, they will not have the resources to allocate extra funds to highly inclusive schools that take higher than average numbers of pupils with additional needs. Equally, mainstream schools may find it difficult to accept or keep pupils with SEND because they cannot afford to subsidise the provision from their own budgets, as they are already under significant pressure.”

While schools are under a duty to admit children with an EHCP (allegedly), children without this protection on SEN Support may be at risk of finding themselves without places at their local mainstream school. And even with a duty to admit, there are ways that schools, whether mainstream or academies, can make it clear to parents that their children aren’t especially welcome, whether this is for funding or performance table reasons.

To me, cutting education budgets is such a huge false economy. You only have to read this from the Itmustbemum blog to have this illustrated clearly.

These are tomorrow’s adults, tomorrow’s workforce, tax-payers and innovators. Inadequate investment in our country’s future, especially when we are on the brink of such uncertain post-Brexit times, is just plain madness. Children with SEND can and do make enormous contributions to society as adults, given the right support in childhood. They can and do go to further and higher education or worthwhile careers when their difficulties are met in a timely, compassionate manner. They do not become reliant on the state or trouble the criminal justice system. This is not off topic, this is a common sense extrapolation of the effects of a lack of funding.

The LGA says government should use the high needs funding consultation as, “an opportunity to reduce financial pressures and ensure that vulnerable children have access to the services they need to get the best start in life."

“There has been a historic underfunding of high needs funding and a significant increase in the number of pupils with special educational needs or disabilities in schools. Whilst the additional funding announced earlier in the year was a step in the right direction, it was never enough to meet the needs of the increasing number of SEND pupils.

“Councils are doing all that they can to make sure children with SEND get the support and opportunities they need to flourish, but are experiencing increasing demand for all services. Proposed changes to schools and high needs funding could also make this problem even worse, taking away the freedom for councils to top up high needs funding from other budgets if necessary. "

Cllr Richard Watts, Chair of the LGA’s Children and Young People Board

Are councils between a rock and a hard place?

It would seem, on the face of it, that LAs are being squeezed to breaking point by government underfunding and rising numbers of children with SEND. However, councils themselves are far from innocent victims.

In some ways, this is too little, too late. From a parent's perspective, this call from the LGA should have come much earlier. It also greatly underplays the role that local government has played in narrowing the life chances of young people with SEND.

While the figures the LGA point to are true and it is right to point to a crisis, the threat that councils "may not" be able to meet their statutory duties is a bit rich. Thousands of parents would attest that councils have not been meeting their statutory duties to disabled children for years. Their methodology of disputing parents’ support requests and dragging them to the SEND Tribunal has been costly for families and for LAs.

One parent of children with special needs told me, “I've fought like a dog for provision for my kids for over a decade. I can remember being told by my LA that there was no money for SEND 12 years ago. They had the money - they ran out of consultants to employ at one point - they just didn't want to spend it on SEND.

“If councils were magically given more Whitehall money for SEND now, how much of it would end up actually improving outcomes for children? These are organisations that are now hard-wired to minimise, deny & dispute need.”

It’s not just parents who fight for SEND funding. I know of SEND management practically begging council leaders for money and being turned away empty-handed. And with their jobs and careers at stake, even the most determined will pause before ruffling too many council chief feathers.

More money is necessary, but money alone is not sufficient. As we have said many times, little will change unless there is a radical shift in organisational culture at local authority leadership level (which travels downwards) to stop treating their legal duties to children with SEND as an optional extra.

What is the high needs funding consultation?

The government is seeking to change the funding system claiming the  current distribution of funding is unfair, untransparent and out of date. Similar schools and local areas receive very different levels of funding, with little or no justification. Unfairness and discrepancies in funding levels are seen right across the country. That is true both of funding for schools, and the funding the government provides to support the life chances of our most vulnerable children and young people with special educational needs (SEN) and disabilities.

Who are the Local Government Association?

From their website: “We are a politically-led, cross party organisation which works on behalf of councils to ensure local government has a strong, credible voice with national government. We aim to influence and set the political agenda on the issues that matter to councils so they are able to deliver local solutions to national problems. The LGA covers every part of England and Wales, supporting local government as the most efficient and accountable part of the public sector.”

We have more posts to come on Tribunals and parent experience of EHCPs in the next few days so sign up and don't miss out!