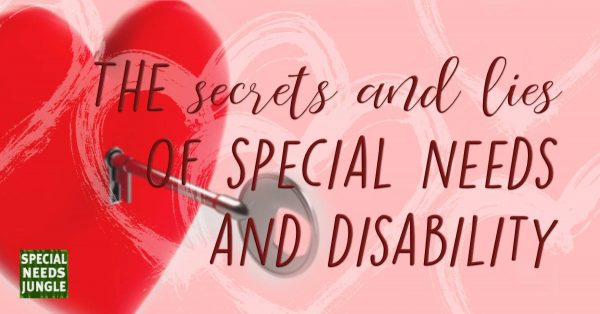 A secret: Confidential, untold, not to be made public. In other words something to be hidden.
A lie: To speak falsely or utter untruth knowingly. Again, to hide something.

Why do we do keep secrets from and tell lies to our children? And it seems the more different they are from other children the more we do it. To protect them? No. To protect ourselves.

I’ll try to explain: Having a child who is different is often a shock to parents. The reality slowly sinks in, usually with the mother first and it is then that she/me/you begins the process of accepting this new child, the child with challenges that we didn’t expect and that at first we don’t understand.

The process is similar to bereavement and it takes a while before we can come to terms with this unexpected state of affairs and help others to do the same. Bereavement is very publicly visible whereas ‘different’ takes time to recognize and accept. Often during this process the child, even when they are old enough to understand, is not involved. There is whispering, talking behind closed doors and arguing. Children, even those who are autistic, are sensitive to this tension and can at times blame themselves.

Secrets and lies was not going to be the topic of my third blog, as I had promised you follow ups to my top tips (to come later) but the idea was ignited whilst watching the marvelous BBC drama, ‘The A Word.’ If you haven’t seen this amazing piece of work, you must. Even my husband was immersed and he is not fond of any programme to do with feelings or education. He doesn’t do hospital programmes either. But then I hate sport and war films. Enough to say we rarely overlap in the television stakes, but this provoked such interest that we had a real discourse, not an argument, about this programme afterwards and I was so fired up that I had to grab a pen and paper to start writing notes.

The child in the series has autism but the difficulties that his parents have are similar to those that many of you reading SNJ face. Even the title 'The A word' shows how euphemisms are often used to soften the reality. Think about how people say the ‘Big C’ instead of cancer or ‘gone away’ instead of dying. When I am working with bereaved parents and children I always advise that phrases such as the one I have just quoted or similar, such as, ‘left for a better place’ are confusing for a child. It can lead to them thinking that they have done something wrong, as the person has not taken them with them. Clear communication is vital and it is not cruel to say plainly that the person 'has died'. More explanation of what that means might be necessary later but there is no misunderstanding and clarity helps the grieving process. It is the same with explaining to a child why they are different from their peers.

Open and honest is the way to go

I once worked with a Year 5 boy with Asperger's who was withdrawn, unhappy and greatly underachieving. The parents were great with him, but had never actually discussed why he was feeling and behaving as he was. Why do we do this? If a child has to have regular insulin injections for diabetes, we would explain why. When a child is sick we tell them how the medicine will help them to feel better. But where disorders such as ADHD and autism are concerned, we tend to skirt around the issue. I think this is because once we talk openly and honestly then that’s it, they are a label and not just a child. The A child perhaps.

This particular boy and I set out on a world of discovery finding out all we could about autism and it wasn’t long before the penny dropped and he began to understand why he behaved differently from others in his class. Once he knew why and that some very famous and intelligent people were also like him, then he could begin his own steps to success.

Acceptance is the key to moving forward as this teenager discovered.

“I had known two years earlier that school seemed harder for me than for my friends and classmates. When I learned I had ADHD, it was both a relief and a fright. I really did not understand what was happening in my brain, and that was scary. But, I also figured out that my new diagnosis would be the start to learning how to perform to my best potential.”
An extract from Embracing your ADHD – a free guide by Grace Friedman

Grace discovered that talking and sharing helped her accept and live with her ADHD.

"If a man does not keep pace with his companions, perhaps it is because he hears a different drummer. Let him step to the music which he hears, however measured or far away." Henry David Thoreau (Poet)

Parents though can find acceptance very scary, as it means finally letting go of the vision of the child you thought you were going to have and a route you knew you were going to take and accepting that you are actually in unchartered territory with an uncertain future. We protect ourselves from this, as long as possible.

Acceptance is the key...

Fathers in particular, can take a very long time to accept any diagnosis, blaming everyone and anything for their child’s different behaviours. Parents with different viewpoints often results in unhealthy, unproductive conflict. It doesn’t help when other people, even other family parents do not understand and make comments such as;

Even children who do not have a particular difficulty can be shielded from the truth by well intentioned but I think misguided parents. Children themselves have told me this during informal discussions such as lunch time chat groups where the one topic they kept coming back to was; ‘why don’t our parents be honest with us?’

Secrets and lies that made these children feel that they had done something wrong, had somehow caused the problem. There should be an open and honest dialogue between parents and their offspring discovering together the strengths and the difficulties that they can encounter in life. If they do have social and learning difficulties which can make them different then the quicker that is accepted and talked about the better.
A Deputy Head friend of mine said on reading this blog, “It is so important that people understand the importance of honesty with our children.”

In The A Word drama series, the father has taken longer to accept his son’s diagnosis, but in journeying to this point he has come rather lovingly to the conclusion that they have to let their son be their guide, “...our own North Star.”