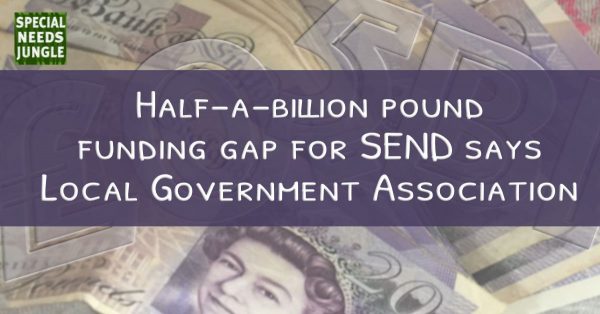 Councils are facing a projected shortfall in SEND funding in England of £536 million for this year, according to the interim findings of new research by the Local Government Association.

The LGA says the figure for 2018/19 is more than double the gap they faced the previous year as local authorities with statutory responsibility for SEND, "struggle to cope with rising demand for support".

The report, commissioned by the Isos Partnership, is highlighting interim findings, showing that between the 73 (just under half) of LAs that responded to the survey, there will be a total deficit of £280 million by the end of 2018/19. It then extrapolates that number, figuring if this is the case for one half of English councils, it will be a similar story for the other half. So scaled up, this could translate to a national deficit of £536 million compared to 2017/18's similarly projected national deficit of £267 million.

The LGA is warning that, "...this growing gap is putting at risk the ability of councils to meet their statutory duties", and that children with SEND could, "...miss out on a mainstream education without urgent action by the Government to provide investment in the Local Government Finance Settlement next month." It says the underfunding of SEND is also adding to the severe pressures already facing schools.

Actually, disabled children have been 'missing out' on mainstream education for years already and not just because of government cuts. It's convenient to blame funding cuts but so many of the councils that the LGA represents, have wilfully shirked their duties to give disabled children the provision that is their right, believing their own SEND policies somehow trump the law. They do not.

The government, meanwhile bleats on about how schools have more funding than ever - see this post about their truth economies with this statement.

The LGA points to statistics such as:

Did the government forget that when you increase the age limit for statutory support from 16 to 25, it's going to be taken up? And that's not free. Au contraire, a large proportion of the young adults who need post-19 support are those with the greatest needs, including access to independent, specialist residential colleges, which don't come cheap.

Similarly, when doctors are now saving tiny preemies and babies with serious genetic conditions, it's obvious to most that they're going to require the support of an EHCP at the very least. And not just the 'statement in a fancy frock' version, but one that includes a good chunk of health and social care provision. It's no good coming up with large-scale SEND reforms without looking at the bigger picture of what else is going on in society and including that in the mix.

And the increase in special schools? With 'inclusion in mainstream' the government's mantra, why are the numbers in specialist placements increasing? Surely they should all be happily ensconced in high-quality, local mainstream provision? Shouldn't they? Maybe they should, but the reality is far from that.

In the government's Nirvana, schools take their £6000 per SEN pupil delegated budget and spend it entirely on SEND provision, including funding teaching assistants. In this ideal world, where schools get 'more money than ever', the head teacher can't see their desktop for the tall stacks of £50 notes. They edge out from behind it to welcome these additional new children with SEND with open arms, alongside the SENCo, who's a valued member of the Senior Leadership Team. If this doesn't sound like your school, I'm sure you're not the only one.

The reality is that with schools saying they are seeing significant cuts to their budgets, at least some of their delegated SEN budget is often used to buy essential supplies, plugging gaps in core funding. This means they have little left over to help children with SEND and so they don't really want to encourage them to stay around or join the school roll in the first place. Those schools that are inclusive find parents naturally make a beeline for them. However, as delegated SEND funding is retrospective, it's based on the numbers from the previous year, so may not be enough to cover a large influx for the next school year.

The LGA cites one reason for the increase in demand is, "the code of SEND practice rightly raising expectations of parents." This is astounding. The SEND Code of Practice is the meat on the bones of the Children and Families Act 2014, Part 3. That's the legislation that matters and it's nothing to do with "rightly raising expectations"; it's the law, innit? Is it raising expectations to anticipate that your child will get what they are legally entitled to? And let's face it, however high parents 'expectations' are raised, they face a bloody long, hard and expensive battle to get any support for their child at all.

The LGA’s research shows that councils have overspent their allocated budgets for children with SEND, known as the High Needs Block, for the last four years. It says that while high needs expenditure is rising, high needs block allocations (from the government) are not increasing at the same rate. Previously, this could be topped up with funding from the general schools budgets. However this flexibility to transfer funding has now been significantly restricted by government, which is making the funding crisis even worse.

A timely reminder about funding ahead of the Government's Spending Review

After the disappointing "little extras" fiasco that was The Budget last month, this report is timed to prick the "consciences" of Ministers as they finalise the Spending Review, if they can tear their eyes away from the other fiasco that is Brexit (Boo!)

Hackney Councillor, Anntoinette Bramble, who is Chair of the LGA’s Children and Young People Board, who seems to have taken on board my "perfect storm" comment when we appeared on LBC a few days ago, is quoted as saying:

“We face a looming crisis in meeting the unprecedented rise in demand for support from children with special educational needs and disabilities. Parents rightly expect and aspire to see that their child has the best possible education and receives the best possible support.

“Councils have pulled out all the stops to try and do this, but are reaching the point where the money is simply not there to keep up with demand. Schools are also being pushed to the brink by the underfunding of SEND, at a time when there is already severe pressure on general schools funding.  This risks creating a perfect storm, where not only does this mean schools can’t provide the extra support pupils with SEND need, but it means other pupils and teachers suffer the consequences of funding being squeezed on a daily basis, by not getting the support in the classroom that they need.

“As our interim research shows, there is a significant shortfall in funding, which we urge the Government to address in next month’s Local Government Finance Settlement and we are keen to work with ministers to bring this about.” Hackney Councillor, Anntoinette Bramble, who is Chair of the LGA’s Children and Young People Board

Cllr Bramble, it's worth noting, is from Hackney, one of the councils that parents have taken to Judicial Review over SEND cuts, along with parents from Bristol (who won theirs) and Surrey (awaiting a result, as is Hackney). Parents in Portsmouth and North Yorkshire are also looking to do the same. Where she says parents "rightly expect and aspire" to see that their child has the best possible best possible support, I might restate that parents have a LEGAL RIGHT to this, it's not a 'nice to have'.

The project has plucked examples of good practice from 63 local areas around the country and compiled them in themes so that they can be shared across the country. Of note, is Chapter One, Partnership working and co-production with parents and carers, and with young people. Right up front and centre, just where it should be. It begins, "Co-productive relationships are at the heart of local SEND systems." That means co-production with families, not with other paid professionals by the way.

"The colleagues we engaged through this research described two contrasting approaches to working with parents, carers and young people. The first they described as co-production in name only. This approach was characterised by councils and other agencies working in a traditional way, spotting a problem, working up a solution, and then “consulting” a group of parents or young people as if to “tickthe co-production box”. They described such an approach as tokenistic. There was no attempt to ensure those affected by a problem or decision could take ownership of this, and limited opportunity to shape the eventual outcome.

By contrast, the second approach, and one of more genuine co-production, was based around sharing a problem at an early stage, fostering shared understanding of the issue, and solving the problem through collaborative and formative discussions. This involved being committed to working in a different way, as well as a high degree of mutual trust. Several local areas with whom we worked described how, as a first step in building a culture of co-production, council officers and parent and carer groups had worked together to develop some clear principles and protocols defining what co- production meant and how each would seek to work in a co-productive way. Developing and sustaining an effective local SEND system research.

Interestingly, a number of those 63 local areas are current recipients of a Written Statement of Action from Ofsted for having rotten SEND. But it seems that there are pockets of good practice all over the place - and I'm sure every parent can point to one or two practitioners who have really made a difference to their child. This research brings much of it together from wherever they found it. It would be a jolly good idea for everyone in SEND to read this and pass it round their colleagues to see how they could use some of the ideas in their every day practice. Find the report here: Developing and sustaining an effective local SEND system