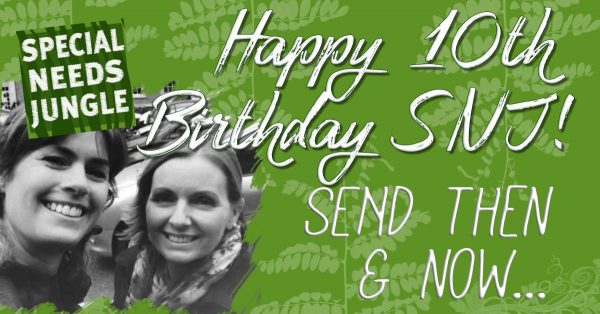 Happy birthday to us! 10 years ago today, I started writing down some information about how I had successfully got a statement of special educational needs for my younger son, even when no one thought I would.

Little did I realise that, a decade on, I would still be writing that same blog and it would be read across the spectrum of parents, teachers, school leaders, people in local authority SEND departments, NHS (we’re listed on NHS Choices) and those in government both officials and politicians. Several hundred thousand of them every month.

I didn’t know anything about blogging but back then, not many people did. Facebook and Twitter sharing were yet to be the force that they are today or even much of a ‘thing’ at all. The first ‘post’ was about my son thriving after he arrived at his new specialist school, finally in the right environment - something that many parents will be familiar with.

There are currently 945 posts – and more than 1000 have been written, though some are no longer relevant or were there for a short, purposeful period only. There are more than 20 posts either scheduled or still in draft, waiting to be edited (happily I now have some help with this – if your post is waiting to be published, I can only ask you to bear with us, it WILL be used). There are currently 64 published pages of information and we have more to come.

What's changed? Everything and nothing

We covered the Children and Families Bill, then Act, from its Green paper publication, the pathfinders that piloted the new system, and many things in between. We've covered endless government reviews, charity reports and research recommendations and seen them fizzle to virtually no impact.

Looking back at the first pages of advice, I’m struck by how little things have improved- in fact how they’ve deteriorated, especially over the last couple of years.

It’s a fact that more parents are well informed these days, thanks to social media and the information provided by legal charities like IPSEA and SOSSEN, as well, I hope, from the information we provide at SNJ. Also more accessible thanks to social media are legal experts who are often willing to spell the law out either there, here or blogs of their own. We are very lucky here on Special Needs Jungle to have not only IPSEA answering questions, but also our own SEND legal columnist Hayley Mason, sharing her expertise.

However, it’s not just parents who have access to this information about what the law says.  People in local authorities also have the same access to the same information, but all too often, they are not making use of it. IPSEA even offers training for people in LA SEND departments. Sadly, it seems it’s far easier to believe what you are told by somebody higher up the food chain than actually going to look up the law yourself and act upon it. SEND staff facing cuts to posts are (naturally) worried for their jobs and few want to go to their boss and say, actually you’ve got the law wrong, can you do the right thing, please? I would ask anybody in LA SEND departments to do just that. It’s your moral duty as well as your legal duty. You’ll sleep better at night too.

Are you trying to cut your way through the special needs education jungle in the UK? Special Needs Jungle offers tips, resources and advice to parents negotiating the special needs statutory assessment and statementing process. This is a parent-to-parent site, so there is no legal advice, but there is signposting to those who can offer it should you require it.  It’s mainly to help get you off the starting blocks and to provide links to established organisations who can help if problems arise along the way. It will provide links to useful sites and tips on how to get prepared and stay motivated throughout the process.  SNJ April 12th 2008

I’m proud to say that, 10 years later, we are still a parent-to-parent run site, but we speak one truth and in a way that is accessible to all who need to hear it.  We have many voices on Special Needs Jungle. Some are other parents sharing their experiences of navigating the system – often a perilous journey. Others are experts in their own professional fields who are happy to share their knowledge for free.

We are registered as a non-profit – not a charity (because frankly, I can do without all the paperwork that charity status would bring with it.) We’re not a ‘traditional’ support site, we are more of an information and signposting site, as you might expect from someone with my background in journalism.  We have been known to partner with the DfE (no money changes hands), but we don't have any kind of “special relationship” with them, as someone somewhat bizarrely mentioned recently. We ask for information from and work with them, on occasion, because it’s important for the parents – and practitioners – who rely on our site to have the right information.

I work on the theory that if you don’t ask, you don’t get. I enjoy finding interesting stories to ask people to write about for us – I figure if I’m interested, there’s a good chance you will be too.

If you want your child to go to a particular school because you believe it is the only place they will be able to have a good chance of an “adequate” education you must be prepared for an undoubtedly long, often drawn out, stressful process. Only the most persistent and prepared will be successful. Local Education Authorities (LEAs) aren’t about to make it easy for you; they will give you the least possible they can get away with.

LEAs are also focused on so-called “inclusion” but miss the point that the ultimate goal is to enable children to be included in society as an adult. The fact is, for many high-functioning Autistic Spectrum Disorder (ASD) children or those with dyslexia, dyspraxia or dyscalculia, a mainstream school often does not have the expertise or the resources needed to provide an “adequate” education because these children need a different style of teaching. SNJ 12 April 2008

The quotes in this post are from the first blog page I wrote. They seem rather quaint and a bit naïve, against the current backdrop of “Fairer” funding formulas that are anything but fair; budget-slashing, parent-threatening LAs; child off-rolling, illegally-excluding schools on the one side and in response, Judicial Review-wielding, publically-demonstrating, march-planning, legally-informed, parents and children. The battle-lines have never been drawn so clearly.

The following are (IMHO) inarguable facts:

My hopes for the future

At the moment, all the work Renata and I do, in fact, all the work that anybody does for SNJ, is voluntary. We are fortunate that National Star – thank you – have paid our website hosting fees for the last two years. Your donations pay for everything else. We are also making tentative steps into charging for certain posts and running relevant adverts, which I hope aren’t too intrusive. If you’d like to advertise with us, you’ll find our rates and reach are both excellent. Email us for our rate card.

It’s my ambition to be able to pay people for their work for SNJ and to raise funding to revamp the website. We also want to make our resources downloadable and offer training webinars and this last point is definitely on the near horizon thanks to a potential new partnership.

If you like what we do and what we have done over the past decade and want us to keep doing it, please donate.

I’d now like to thank just a few who have played a significant role in SNJ over the past decade. Renata Blower (who is the best partner in this I could ask for), Angela Kelly (who has been a stalwart support and is an excellent human being), Debs Aspland (who played a huge part in the transition from small blog to non profit) Hayley Goleniowska (our first columnist)  Malcolm Reeve (who’s SENCo post is our most popular ever) SpeechBlog’s Helen Coleman and Elizabeth Gunner, our second columnists and first ‘professional’ experts), Marguerite Haye, (who continues to be a huge support to me and this site) and a hero for all of us, Matt Keer, without whom none of the financial and stats input would be possible.

Thanks also to all of our columnists past and present and to everyone who has given their time to write a post or two for us over the years.